Messy Fun with Balloons and Paint 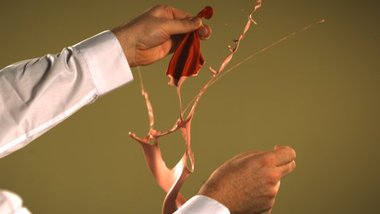 Steve Carr has quite a following because of his humorous sculptures and videos, and this new nine channel video work is typical. A bank of 3 x 3 flat screens is arranged in a grid, the rectangles with a range of coloured backgrounds and each showing two male arms, one shirt-cuffed hand holding up a straining paint filled balloon, the other bursting it with a pin. All occurring in slow motion.

Because of the simple matrix the work leads you to constantly make comparisons, looking up, across or diagonally to images with matching backgrounds, and pondering different stages in the sequence of exploding rubber and liquid - studying for example the after-effects on the man’s hands and clothing.

Then there are the patterns of explosion, the shapes of the flying fluid, the different degrees of viscosity, the skeins of linked up waving drips. There are also the number of pairs of carefully manicured male hands, the angle of cuffs (we see no buttons or cufflinks) and pin insertion, the tan on the skin, different blemishes and arm hair patterns, the acceleration of tearing and expansion in the explosions themselves.

Carr has made a particularly absorbing 22 minute long display that could refer to any number of things, some nasty, from exploding heads (‘splatter movies’) and torture with testicles, to others more uplifting and philosophical such as ‘bursting your bubble’ and spiritual ‘reality’ as stated in the title. The work’s ‘gestures’ could also be an expression of nihilism, yet they really hold your attention as there are so many variations and they all intrigue. This is a word you rarely hear nowadays but it is a masterpiece. I think his best work so far.