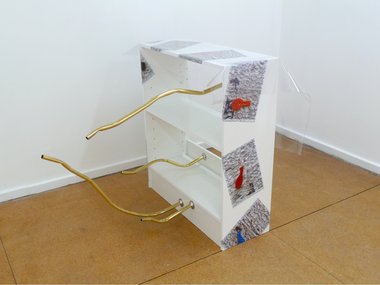 While this exhibition may appear to be burdened by metaphors, narratives, social commentary, symbolism etc, Enberg’s layered allusions sit comfortably in conversation with one another. It is subtle and smart enough to retain the wackiness of the iconography of the traditional Warner Brothers cartoon and consider more serious concerns about art's value and the state of the human condition.

Who deflated Roger Rabbit? The immediate answer is that it was Oscar Enberg in a series of new works that are a reminder of a movie that redefined the relationship between the real and the virtual world of the Hollywood cartoon in the late 1980s. Although Disney may have integrated cartoon characters into the real world in The Three Caballeros in 1944, Robert Zemeckis and Steven Spielberg’s Who Framed Roger Rabbit? made the joyful fantasy of the cartoon and reality, one and the same creature. It’s a great metaphor for the ambitions and desires of humanity in the 21st century and one that Enberg holds with as much affection as he does suspicion and scepticism.

In Who deflated Roger Rabbit? Enberg’s party balloons have been punctured, the bubble gum popped and the furniture seems like the twisted remains of a bad day at home with Baby Herman. Who deflated Roger Rabbit? is an exhibition that shifts back and forth from eulogy to a favourite childhood movie to innuendoes about impotence and a critique of the vacuousness of a consumerism run rampart in the 21st century. And while this may set off danger signs that this exhibition is burdened by metaphors, narratives, social commentary, symbolism, etc, etc, in this instance, Enberg’s layered allusions sit comfortably in conversation with one another. This show is subtle and smart enough to retain the wackiness of the iconography of the traditional Warner Brothers cartoon and consider more serious concerns about the value and role of art and the current state of the human condition.

That why the dysfunctional sculpture that makes up Partial Deflation Décor has weird gold pipes springing from one side, looking as though its been torn from the wall and is scanning the gallery from all directions trying to locate the culprit who has done it harm. Yet, this is hardly a work of art seeking to elicit the kind of humour in which cartoon characters become larger than life as they are mutilated by anything in sight that is thrown, dropped or detonated within their strike range. Rather Partial Deflation Décor keeps shifting the gallery visitor’s perceptions of its intentions; sculpture, deconstructing art object, social/political comment and back to its mundane reality as a here-and-now object in an art gallery that knows it is promising more than it is ever going to deliver on.

And it is not alone in its admission of defeat. Orientated gracefully down the length of the gallery wall, Line Reduction (7% off), is well titled, welcoming the visitor to Enberg’s exhibition with a promise of reducing expectation from the moment of entrance.

You cannot help but feel that Enberg is his harshest critic. If Who deflated Roger Rabbit? is addressing issues around all our desires, Enberg seems to be equally critical of the context of objects in an art gallery as a vehicle for revealing such issues and intentions. Deflated, colourful party balloons and skewed brackets and wall shelves are all rendered useless, reformed as curious art objects. These are works grounded in narratives familiar to any cartoon inhabited by characters that know that all their best intentions are going to meet with disaster. Enberg seems entirely conscious that Who deflated Roger Rabbit? is ultimately a question, best and obliquely answered by Warner Brother’s sign-off phrase: That’s all Folks!

The wide range of approaches to materials within your examples I find make them somewhat incoherent. eg.Armstrong is more akin ...

Admittedly, John, the 'dynamic' I was/am Roger-rabbiting on about (of course) includes my own production. The only substantive difference being ...

Samuel Beckett writes that "nothing is funnier than unhappiness."

Artists and cartoon characters and concur.

There's nothing much funnier than an artist's visually apparent unhappiness with whatever preceded his or her own production.

Art more often than not issues convulsively from its maker's unhappiness at having internalized and (of course) acted upon Marx's adversarial dictum "I am nothing and should be everything."

The entertainment (and the rub) lies in the historical reality that if an artist hopes to displace an existent 'everything' with his or her up-and-coming 'nothing' then there had better be at least a passing reference to whatever (of significance) came before.

Art about art is envy masquerading as influence and homage. Often taking the form of a sort of Oliver Hardy-esque dyspeptic-pot-shot at prominent (and putatively obstructionist) work that preceded (but won't make way for) puppyish, one-upping, commentators.

Have empathy for young artists who now must model and test their work against (and after) ready-to-hand targets - such as Dan Arps, Simon Denny, Dane Mitchell, Eve Armstrong and Tahi Moore - artists who incarnate the very Destruktion the young wish to visit upon them.

Campbell Patterson’s sultana bran and spit works are emblematic (or symptomatic) of the aforementioned envy-crisis. And only (just manage to) be functionally funny by literally throwing in the towel.

Now, is there anything unhappier than that?

Jeepers Roger, you had me fooled. I thought you were talking about 'The Illustrated History of Painting' for a while...the very qualities I admired about it.

Are you saying all this stuff you are rabbiting on about here is not present in your own work? Come on now? The only difference is that your art references are much much older.

I think you misunderstood Roger, John - he's not criticising, but spelling out the whole shebang, himself included. Things precieved as 'negatives' are not always negatives in art, surely?

Admittedly, John, the 'dynamic' I was/am Roger-rabbiting on about (of course) includes my own production.

The only substantive difference being that works (and artists) I was once afforded (by history) have now been 'disclosed' to the point of (almost) post-objective non-existence. A development exemplified by (I'll mention only NZ practitioners for the sake of brevity) artists like Dan Arps, Simon Denny, Dane Mitchell, Eve Armstrong, Tahi Moore and (maybe) Robert Hood.

The query that arises for me then is - how does (or will, or should) a pipeline full-to-bursting of young artists hope to exercise the hoary (and historically productive) strategy of envy/homage in regard to precursor artists and works that maintain a pedigree and existence almost wholly characterized by a perpetual state of Destruktion.

Works that, to my mind and eye, recycle unprepossessing materials rather than prepossessing styles, as an informing strategy.

As an aside I will note that Armstrong's practice has at its core surprisingly strict modernist design principles - but her work's references are to general/corporate principles ( Bauhaus ) rather than authorial/individual style (say... Arps, for the sake of saying something).

Enberg's work - conversely - makes heterogenous reference to the general working principles of the list of (once young) artists I've fielded in my first two post but his exhibition seemed deferentially sanguine (to the point of class-resignation) about the precedent-status of the 'artist-models' (artists-model being a ubiquitous term in the antipodes) his practice stretches to quote and (I'd guess) wishes to subvert/Destrukt.

Perhaps what's coming is a superannuated and bi-polar ecstasy/fear of influence/stylistic-contagian giving way to a more unitive, post-object-of-desire, melancholy.

A kind of standalone unhappiness whose situational friction (if any) creates an unconsummated (think Emmet Kelly, Jimmy Durante) longing for what's NOT there rather than what's alluded to for the fun of it.

I reckon Campbell Patterson may be a clarion of what's coming or what, in fact, is already here to stay. For awhile, anyway.

The wide range of approaches to materials within your examples I find make them somewhat incoherent. eg.Armstrong is more akin to et al. or Tomoko Takahashi in that she is not so interested in innovative hybrids of materials or blended substances but rather meaning via juxtaposed elements (like also Don Driver) - whereas artists like Simon Denny and Dan Arps defintely are. They have a sense of a mad laboratory where ingredients really are cooked up in a pot, bizarrely blended and then examined. From what I've seen of Enberg, he is impressed by Denny but leans towards Armstrong.

(say... Arps, for the sake of saying something).

When I meant Arp, Hans Arp.

Now, I have to go correct my blog as well.

Perhaps I should stick to pig hair on a stick and colored mud.