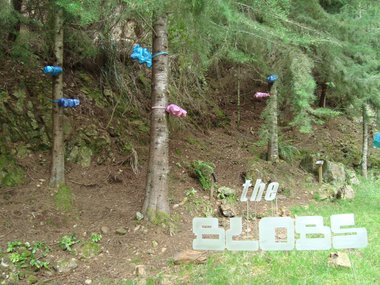 The foremost challenge is the amount of work already littering the site. I say 'littering' because Waitakaruru has reached that point where without careful overall curation, and some pruning, it could become a motley collection that muddies rather than enhances the experience of place. This exhibition sometimes feels crowded, and the permanent work makes it hard for a curator to create any kind of thread.

Organised by the Waikato Sculpture Trust, this sculpture park within a botanical garden is a privately owned 17-hectare site on a hill rising above farmland just north of Cambridge. The park hosts three exhibitions annually with outside curators. The next, curated by Kim Paton, opens March 17. These exhibitions have to work alongside a broad and rather mixed collection of purchased permanent work onsite.

Certainly it’s an interesting and charged location. A former quarry, extensively rehabilitated, the sculpture trail sees you move around several large lakes, up the hill (with varied levels and different planted areas) to the old quarry itself. This forms a dramatic hole in the hilltop, with a pond and craggy cliffs. You then gently wind down through pine forest, Eucalyptus and orchard. Surrounded by farmland, it feels like an island sanctuary (it recently qualified for the government’s Permanent Carbon Sink Initiative due to its extensive established tree planting). Its history, dramatic changes in environ and the way it relates to its surroundings in terms of its present and past history gives artists plenty to sink their teeth into.

The job of the guest curator here is challenging. The foremost challenge is the amount of work already littering the site. I say ‘littering’ because Waitakaruru has reached that point where without careful overall curation, and some pruning, it could become a motley collection that muddies rather than enhances the experience of place. This exhibition sometimes feels crowded, and the permanent work makes it hard for a curator to create any kind of thread.

Guest curator Andrew Clifford however does bring to the current exhibition a bunch of strong works that make a trip well worthwhile. Yet equally there’s also a surfeit of average work to further complicate things. This is the common danger with outdoor sculpture shows - the assumption that lots of different spaces provide lots of opportunities for a diverse variety of objects, and a curator can get away with being more open and less selective. Often with the open submission process they’re pressured to take in more work than they would do so otherwise (compared to solely undertaking a commissioning process). This doesn’t always give the land itself a chance to breathe.

“Rather than risk being overwhelmed by this vast landscape,” Clifford writes in the catalogue, “art must confront its place within the site and wider environment.” This he states as his aim. “Put simply, it’s about being situated in an environment.” To put the given distractions I note to one side, Clifford does achieve this with a dozen or so strong works.

A deserving winner of a principal prize, the Harkness Henry Award, Regan Gentry’s Cold Comfort is a domestic chimney and fireplace made from shaped pumice bricks (blackened in the fireplace), sitting delicately on a pile of firewood logs. Like a take on a Chris Booth pumice column it is an engineering feat, suspended by cable from a pine tree above. The work instantly recalls the remnant colonial chimneys that dot our landscape. Placed near a cliff edge its precariousness and the signs of human hand and human-made heat make it a beautiful and expressive icon of Pakeha home and hearth relationship to the land. It’s good to see Gentry pick up on some of themes he began with his Gorse of Course project.

Mary Louise Browne’s language work always seems to thrive in site-specific context outside of a gallery and so it is here with a neon work. Recalling the electric farm fence, placed in a cultivated rock garden planted with natives her sign states wryly with urban gas Truly rural.

This use of text as sculptural element in an outdoor setting is also rather effective in Iain Cheeseman’s three humorous Sign works. Alien-like blobs (gender specific pink and blue) are attached ornamentally to pine trees with aluminium signs in space-age font declaring ‘The things’, ‘The blobs’ and ‘Humans Have Found Us’. They have a delightful playful ornamental quality amongst an exotic pine plantation, drawing attention to the incongruity of much garden sculpture. The works are set up beautifully for the camera, making the signs appear in image as digital captions. The work causes pause for thought about how we exoticise the landscape through our framing of it. Less eloquent for me as human punctuation marks were the steel Xs (marking spots) placed by DJN in the quarry site. A nice idea but I failed to find a readable pattern in their placement.

On the downhill run of the walk works get more space and there are some distinctive takes on sculptural form, interestingly sited. Imagine the Land Project’s Mihi Kore is an arresting earth carpet of abstract patterns, made of adobe, crushed shell and soil. Andrea Du Chatenier’s Bog Folk are the heads of two colonial looking gents rising out of a swampy pond - having a soak and a chinwag about the changes around them. Like Gentry’s work they are emerging spirits of the past, rising from historical and geological layers below, humour lightening their sedimentary load.

Lakeside, Tiffany Singh’s cluster of windchimes hang from trees, gently moving and chattering like birds in the light and shade, their coloured tongues speaking with grace and sensitivity with the flora and vegetation around them.

The works mentioned, together with those of Brydee Rood, Lorraine Pemberton, Pam Olver, Gareth Williams and AD Schierning, all work in dynamic unexpected ways in situ. This is something that the large planted stand-alone sculptural objects largely struggle to do in this exhibition. With the exception of Leon van den Eijkel’s A Kynic Tree they feel like they could have been plonked anywhere. They don’t meet Clifford’s aims.

Final mention goes to a permanent damaged work, Waikato sculptor CK Reynold’s Absolute Divide. A 26-metre long wooden wall stretches up a hillside marking the 1860s confiscation line when the crown took land from Tainui, and the line dividing the Waikato and Matamata-Piako districts. This line is still apparently visible from the air. As a sculptural element the wall itself is fascinating, but it is also meant to feature on its top a linear series of aerial photographs.

This was the most arresting and vital piece for me at Waitakaruru. It struck me as odd that while the Sculpture Trust state they are seeking sponsorship for its renovation this hasn’t been prioritised above the temporary programme on site. It surely deserves local council support. When it comes to art, the planting of exotics perhaps remains far more appealing to donors.

Nice point Owen: "Another effect of this 'open door at your own expense' policy, besides the site irrelevance of dumped ...

Similarities being that they draw from the same pool of artists and to a greater or lesser extent expect new ...

Each of these outdoor sculpture venues must have their own set of difficulties. Waitakaruru is very different from Sculpture on ...

Nice clear piece Mark, I agree that sculpture sites get cluttered with miscellaneous pieces, defying the curator. Often this has come about through the common practice, over the past decade, of any organisation or individual, learning that sculptors will install and exhibit work at their own expense and the motive for the exhibition is often charitable or commercial and not about sculptural excellence.

Coupling this odious practice with the working definition of a sculptor being 'someone looking for storage space' and we have arrived at the situation where these sculpture parks now need heavy pruning after years of curatorial neglect.

Another effect of this 'open door at your own expense' policy, besides the site irrelevance of dumped sculpture and the self indulgent studio work, is the preponderance of cheaply made, ephemeral works which curiously mimics / mocks the current fashion for loss leading installation art in dealer galleries.

The upshot of this is that many of the countries better sculptors have moved away from these kind of exhibitions in horror. The Waikato Sculpture Trust is to be applauded for its courage in attempting to right the situation.

Each of these outdoor sculpture venues must have their own set of difficulties. Waitakaruru is very different from Sculpture on the Gulf on Waiheke Island, or from Brick Bay in Warkworth, for example.

Similarities being that they draw from the same pool of artists and to a greater or lesser extent expect new or site relevant work.

Nice point Owen:
"Another effect of this 'open door at your own expense' policy, besides the site irrelevance of dumped sculpture and the self indulgent studio work, is the preponderance of cheaply made, ephemeral works which curiously mimics / mocks the current fashion for loss leading installation art in dealer galleries."
It's one I was tempted to make so pleased you made it. I had a few of those 'ah, another one of those' moments, though I was also aware that I am far more travelled a viewer and that many in the Waikato experience these artists for the first time. They are I think trying to work commendably away from this model.
And in this regard I don't think, John, this should be so different from Sculpture on the Gulf. It could be just as significant, if they could move some of the furniture to other sites where they can be appreciated.