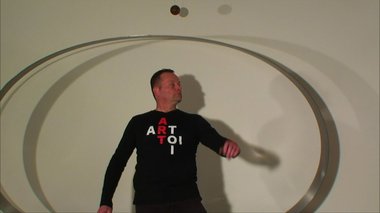 Note the title says ‘Reading' Len Lye, not 'Dancing with', which with the profoundly visual, kinetic and aural physicality of his sculptures and films, might make more sense.

It’s a nice idea this, for the Lye Foundation to mix five contemporary artists with the historic works of Len Lye, much like the National Gallery in London does occasionally with works from its collection. Except note the title says ‘Reading’ Len Lye, not ‘Dancing with‘, which with the profoundly visual, kinetic and aural physicality of his sculptures and films, might make more sense.

Still Lye could be a terrific writer, especially with his extraordinarily vivid off-the-cuff poetry, and with his various notebooks and constantly reworked lectures he did leave a lot of textual material for his admirers to pour over. So interspersed around half a dozen of his works we have a number of current responses to his writing: responses as art, not critical writing or literature.

Though some come close. There are the stroppy Tessa Laird copies of Lye’s handwritten quotes from Freud’s Totem and Taboo that he placed alongside drawings of tribal art made in Christchurch, Sydney and Auckland museums. I like her argumentative notes in the margins, and private little jokes about him and her friends who also admire him. A blend of respect mixed with cocky assertion of contrary positions - directed at Freud and Lye. And sensual too. Laird likes colour just as Lye did. A bodily pleasure.

You don’t get that empathy with Dane Mitchell’s contribution and though he is a terrific artist, I’m puzzled as to why Cann invited him. The exhibited result is about his practice, not Lye’s: spoken poems as articulated breathed sounds from Mitchell’s mouth encased silently in a suite of glass bubbles. While reading Lye’s poems off the wall transcripts can provide cadences and rhythms in your mental ear, Mitchell’s display is clever but irrelevant. He might as well have read a shopping list.

Ah, but he didn’t, you might say: the idea rules. I’d say that idea uses language to smother language. Cann’s explanation in the small catalogue uses words to explain Mitchell’s process but his action and Mitchell’s method is antithetical to Lye’s ethos in a way that Laird’s contrarianism isn’t. She pinpoints issues that open up the conversation, not close it down. You might argue that the fact that Lye’s poems are written on the wall proves I am wrong. That they are present for the visitor to read - to mentally and aurally interact with - and that Mitchell generates that. I don’t think so.

Unlike Mitchell, I think Phil Dadson gets out of his comfort zone in his interaction with Lye’s art. In his video OSMOSIS (of Len Lye’s Universe) he is exploring ideas connected to Lye’s interest in bodily empathy, how the viewer can be so physically affected by the motion of a sculpture like Universe that they start to replicate it. This inclination to mimic the art’s movement Dadson cheekily exaggerates with four visitors who unknowingly ‘contaminate’ a gallery guard, while making nonvocal music with their bodies that references an earlier Dadson video Bodytok. Filmed in the new Auckland Art Gallery OSMOSIS is not aurally or visually seductive like most Dadson projects, developing a quirky and funny narrative about contagious art instead. It’s a little awkward and so for him unusual. And about dancing to Lye, not reading - and better for it.

The highlight of the show - and situated opposite Lye’s two 1937 films N or NW and Trade Tattoo - is a large lightbox / shadow theatre constructed by Andy Thomson and Daniel von Sturmer, with intricate moving and suspended parts. With this boxlike tray tipped on its side, to read the identifying labels you have to walk around behind to also discover the hanging torches, whirring turntables and delicate mechanisms that cast spinning shadows and coloured streaks on the translucent Perspex screen at the front.

Like a magic lantern set up for Victorian kids this work provides its own fairytale delight mixed with mystery. It crosses the width of the gallery space and dominates the ground floor with its playful use of silhouetted language, hovering hot spots and scattered speckled reflections. Its spiral motions reference Lye’s nearby kinetic sculpture Roundhead and painting Snow Birds Making Snow, and wordplay his friendship with Robert Graves and Laura Riding. Because of its size it engages with the bodies of its audience, succeeding even more than Lye’s own films which are on a small flat-screen. It captures and converses with his spirit perfectly.