Colour Beyond the Frame 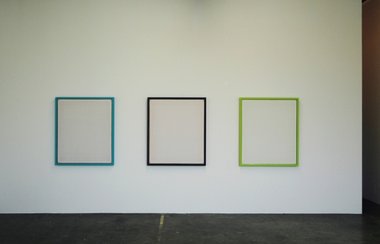 What is fascinating is the teasing manipulation of the visible - what is chromatically barely detectable around the outside of the conspicuously framed rectangle or within it.

At first glance Melbourne painter Tomislav Nikolic carries on the minimalist tradition of American minimalists from the late sixties like Jo Baer and Ralph Humphrey, artists who presented austerely blank or extremely delicately stained canvases delineated by starkly painted borders and/or dark frames. Nikolic however is interested in fluorescent chroma to diffuse the contoured presence of the painted stretcher, to make it more ethereal or amorphous so its colour floats inside and outside its frame, on the canvas and on the surrounding wall. The work also uses theosophical colour symbolism.

Such works are impossible to photograph because the image has faint evanescent auras that though clearly detectable by eye - as they bounce off the wall or cause central afterimages - are extremely hard to document. The reason is that these works are intricate in their construction: the artist has devised a complicated system of presenting colour using thin washes, encrustations of marble dust, glided troughs containing float-mounted canvases, and reflected chroma radiating from behind the frame and the side of the backing.

Usually a selection from seven colours is used in a variety of applications, for the thick frame is like a cut-open lid in a flat shirt box, being slightly raised up from the enclosed tray that float-mounts the suspended stretcher and which is pressed against the wall. The planes of that tray can only be directly seen from the side, dazzling vertical slivers that you only see the reflections of (without their cause) on the wall - when standing front on.

The pale grey canvas varies according to the thin undercoat under the layers of marble dust. Like the frames, the hues consist of hot orange, hot pink, lemon yellow, teal blue, bright green, violet and indigo blue. For the frontally hidden trays however, the hot orange in the colour set has been replaced by a creamy pale gold - while in the troughs the gold leaf varies from 16.9 carat to 24, in optical temperature from bluey green to red.

The seven colours epitomise the occult theosophical system of the Seven Rays, a structure articulating psychological properties that describe the seven varieties of personality found in the cosmos of continually reincarnating selves. However it is not so much the symbolism as the experience of these paintings that is important. It is not the mystical coding but a directly bodily encounter with the work in a space that is vital.

According to their proximity to light streaming in from the high windows, their individual placement to each other, and the distance you stand from them, the combinations exude different rhythmical and sequentially chromatic moods each time they are installed. Each work is itself a unique combination of selected frame colour, undercoat hue, marble dust thickness, gold leaf type, and inner tray colour. The paint generates coloured light that interacts with the localised space.

What is fascinating then is the teasing manipulation of the visible - what is barely detectable around the outside of the conspicuously framed rectangle or within it. The other works, using acrylic and marble dust on heavy paper, in white frames and under glass, emphasise mineral materiality with their tactile encrustations and granular colour. They have a very different feel, as if found on the surface of a salt lake, and are not sculptural objects that play with your retinae. They look as if manipulated by gloved fingers (marble dust is highly toxic apparently) the crunchy ‘crystalline’ advancing from the edges so that the colour is hidden in the centre and dominant on the periphery - a variety of composition that may be conceptually or philosophically motivated as a reference to mystical realities.

So amongst other things, this excellent exhibition is about visual curiosity and the difficulties of treating painted objects, the spaces that enclose them and the viewer as discrete entities. Clever and thoughtful.

Marble dust is not delicious but it won't kill you if you eat it. Marble (metamorphic limestone) contains calcium carbonate ...

Marble dust is not delicious but it won't kill you if you eat it. Marble (metamorphic limestone) contains calcium carbonate and silica which if inhaled can cause chronic upper respiratory irritation and silicosis, but as David Reid the scientist/foundry man say; 'if you are worried about silicosis keep away from the beach.'