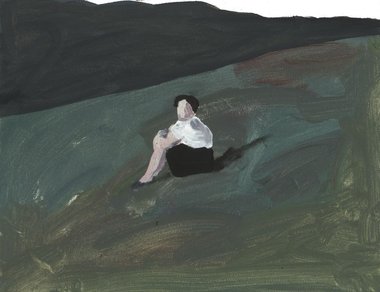 The painted faces of Girl and On Hill are not faces at all, but blank patches of colour. Oddly, these are not discomforting or alienating. Rather, we are invited to place upon them our own stories or familiar faces. Perhaps we are almost forced to do so, as the artist obliterates any other sense of history and context. His is an intimate, immediate kind of unknowing. We assume knowledge or familiarity even before we realise; we don't really comprehend.

Patrick Hartigan’s exhibition of new work is sophisticated and layered. Hymns & Wee Plants deals with classic Hartigan themes of family and place, and the complex relationships between the two. The artist has created paintings from scratch as well as co-opted pages from magazines like The Australasian Photo Review and added to them. Photographs and text from the magazines are made part of Hartigan’s own travel diary. These works were created over time and continents, and have an appealing ambiguity and quietness.

The titles of individual works range in mood or connotation from abstract - Untitled, Epilogue, Girl - to intimate - Mother & Child (political), Grandpa’s Buttons. For some works, an intimate title is used for an abstract work, and vice versa. Even though we are told the buttons belong to Grandpa, visually they are mere coloured dots on a brown background. Epilogue shows a photograph of two women standing on a cliff, looking down, against a backdrop of hills and clouds. This focused, figurative image is encircled by a sea of black brushstrokes. The women appear as they might through a telescope, unknowingly observed by a faraway viewer.

Hartigan exploits the conflict between the known and the unknown in these works through his use of black and white, blank faces, cut-out holes and patches painted over. Black text is painted over hurriedly in white; two white shapes are separated by a black void. The painted faces of Girl and On Hill are not faces at all, but blank patches of colour. Oddly, these are not discomforting or alienating. Rather, we are invited to place upon them our own stories or familiar faces. Perhaps we are almost forced to do so, as the artist obliterates any other sense of history and context. His is an intimate, immediate kind of unknowing. We assume knowledge or familiarity even before we realise; we don’t really comprehend.

The blanks and holes combine with a muted, pastel palette to create a somber mood and the paintings are spaced on the wall beautifully. The small birthday cake and single candle of One are left to hover alone, while others hang as if in series, their similar shapes and landscapes representing parts of a visible whole. Journeys shows an infant’s silhouette cut out of a small photograph in the upper right hand corner, its shape reappearing as a black blotch inside a baby bottle. There’s a kind of Magritte-like play about it, Hartigan’s humour being dark and conceptual. His displacements and subsequent replacements highlight any uncomfortable notions of place and identity.

Some works are particularly strong in what they don’t show. Madonna & Child is a oil painting that looks copied from a photograph. Yet we only see the dark patch of colour representing the mother’s clothing, and two abstracted hands which cradle the child. What we see of the child’s body - back, one arm, one ear, hair - are broken into planes of neutral colours and the harsh toning makes the child appear as a wooden doll, limp in its mother’s arms. The child’s face is turned away from the viewer, the mother’s is cut out of the picture altogether.

In contrast Mother & Child (political) is more specific, being obviously photographic in origin. The mother looks down lovingly at the infant who looks contentedly out at the viewer. They are juxtaposed with a brown land mass representing Australia. It appears as if the viewer has clicked on that particular spot with a mouse, and downloaded real individuals who live there at a specific time. I couldn’t decide if this image was, to me, actually the more political of the two. Both are completely different in what is left out: Madonna & Child lacks expression, specificity, perhaps even life. Mother & Child (political) lacks connectability and mystery; it is simply documentation. Madonna & Child is definitely the more intriguing, a deeply emotional work, and if the personal is political, it has more to say.

The hymns of the title can be heard between mother and child, from person to place, in artist and viewer. The wee plants are native trees, family foundations and a sense of time. But amongst praise and growth are darkness and displacement. These new works mark a point of sophistication in Hartigan’s work as he attempts to balance the emotional with the conceptual. These pieces together achieve a profound comfort with discomfort. 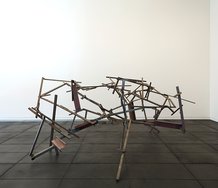 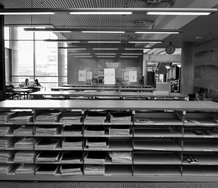 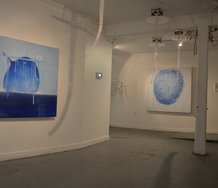 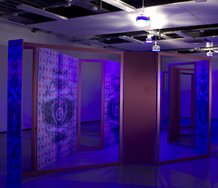