The Stubbornness of Sculpture 1 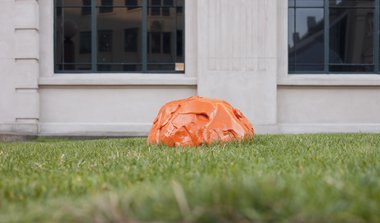 The curators state from the outset that, as a sculpture exhibition this isn't about bronzes on plinths. Meaning: it's also not principally about the freestanding form that most of us associate with the word sculpture. Rather than a survey of sculpture, it's a show about the relationship between the viewer and the object, and the object's refusal to become irrelevant.

En route to City Gallery I popped in to see the recent additions to the Collecting Contemporary collection show at Te Papa. This proved apt.

When I saw some of these additions to the national collection in other galleries last year - Jim Allen at the Adam Art Gallery and Karl Fritsch, Francis Upritchard and Martino Camper at Hamish McKay’s - they thrived on your encounter with them. They held their spaces as environments. Here, in this hangar of an attic space at Te Papa behind white lines, they’re deadened. Security restrictions and architecture leave you with the impression that this is where great art goes to retire.

In contrast, my first encounter with The Obstinate Object is with an ugly, soccer ball-sized, luridly painted lump on the grass outside. My first instinct was to kick it, as marks suggested others had done before. I did, rather satisfyingly, and found it as solid to the foot as bronze. Then, lo and behold, when I entered the gallery the first thing I see is an identical ball on a circular gold plate, fenced off by white rope and stanchions. On its back is a scrawled, handwritten sign saying ‘kick me’. Yet an accompanying official looking plaque instructs ‘Please do not kick Ivan’.

This work by Scott Eady is an amusing multifaceted prank. It’s a good scene-setting opening joke (if not much else). For more than anything else, The Obstinate Object is an exploration of the complications of interaction between viewer and object in the public gallery today. With an open, eclectic approach the exhibition opens up conversations about the role of the gallery with a wide range of strong artists, emerging and established.

It’s a mixed success. While refreshing in the way it mixes things up, stepping outside the usual closed loops and coteries of artists and also out into the city, The Obstinate Object is better at opening things up than following them through to satisfying outcomes. Post-Prospect and at a time of significant gallery staff changeover it’s as if for such an ambitious and spread undertaking curators Aaron Lister and Abby Curnane simply ran out of time.

The curators state from the outset that, as a sculpture exhibition this isn’t about bronzes on plinths. Meaning: it’s also not principally about the freestanding form that most of us associate with the word sculpture. Rather than a survey of sculpture, it’s a show about the relationship between the viewer and the object, and the object’s refusal to become irrelevant.

If a work isn’t on a plinth or behind a white line, what exactly are the rules of interaction with it? Following on from Eady’s work the gallery plays a guessing game of ‘can I touch this/ can’t touch this’ with the visitor throughout. This is alternately interesting and frustrating.

A huge part of the power of objects today is our ability to touch them and have free movement around them (something the digital environment lacks). Here you long to touch Glen Hayward’s replica of an upset cheap plastic office chair to confirm it is actually, astonishingly, made of wood. Nearby, at waist height - replicating the sort of circular tabular roadside 3D topographical map people love to run their hands over - Brett Graham’s Ringfence begs to be touched, particularly when you discover it’s made of resin coated horse shit. Yet in both cases attendants are kept busy telling people not to.

Wouldn’t it actually be better in some cases for galleries to let the public have a guided, gentle feel? If these were public works in the street you could rub them all you liked. Are we just treating art as a commodity on temporary loan from the private art market?

Upstairs Maddie Leach (an artist who has previously let us dance and ice skate in the gallery) like Eady actively plays with this issue presenting a ‘rare earth magnet’ on a plinth, surrounded by a white line. A sign on the wall informs: “Maintain your distance. If you have on your person: a pacemaker, an electronic device, an analogue watch, a compass, MOs, MDs, credit cards or heavy jewellery.” This notice is both disturbingly and delightfully vague. What if Leach actually gave people the chance to break the white line and hold something precious, or at the very least got the attendants to be active in discussing the dilemma with them?

With so much denial of experience in the exhibition, the upper level of the gallery has an air of negation and death, rather than of warmth and involvement. With the dreary drone of Alex McKinnon’s ‘Reconstruction of a Deaf Piano’ filling the gallery (beyond its striking visual appeal it offered me little), sculptures in bone (Wayne Youle) and walnut (Ben Pearce) and empty harnesses (Alicia Frankovich), plus wooden security cameras (Hayward) looking down on the set up, it’s as if this were a mausoleum for the modern art gallery. Frankovich does provide one brilliant intervention - air is occasionally shot into the gallery through a tyre valve in a hole in the wall, as if valiantly trying to revive a giant flaccid beast.

Considered more simply: there are also far too many unresolved works here for a big public gallery show. Interesting playful ideas that haven’t developed into powerful works: from Lisa Walker’s giant piece of number 8 fencing wire jewellery in the foyer to the Youle, Pearce and Graham works upstairs, and Regan Gentry’s waterfall on the building’s side.

Downstairs is generally a far stronger, warmer experience. This and a range of works that operate either fully or partially outside the building as part of an ambitious extended exhibition programme form part two of this review.

...perhaps it is part of the mythology, or received wisdom, that says that art progresses in a Darwinian way. (See ...

I don't understand the need to reiterate that sculpture doesn't need to be a bronze on a plinth etc etc. ...

Thanks for another thoughtful piece on the 3-D Mark. It is good to raise issues of what is an art ...

Thanks for another thoughtful piece on the 3-D Mark. It is good to raise issues of what is an art object and where and how does it sit in the world.

Might take issue with this work not being 'bronzes on plinths' but.

Bronze is just a plastic medium to manifest the sculpted object, a reproductive technology, which over time has acquired the mana of the objects it has reproduced. I would argue that each object here is being privileged in a similar way by being surveyed in a public gallery.

The same can be argued for the plinthage, several of the works do actually use this very device, otherwise they use the gallery to 'plinth' and support the work as art. Without the gallery some of this work could be 'stuff in the alley behind the bankrupt theatre'.
By their curation they have become privileged objects held in a privileged space.

The business of touching / kicking, its just bad manners, even to this work which is trying not to be so special. Why not scratching or graffitiing or adding your own bits to that assemblage all valid 'viewer interaction' under this egalitarian policy perhaps.

I don't understand the need to reiterate that sculpture doesn't need to be a bronze on a plinth etc etc. Isn't that rather preaching to the choir. Surely it is a fairly safe assumption that the sort of people who would go to this show are already aware of that. It's been thirty years since Rosalind Krauss wrote "Sculpture in the Expanded Field"
http://iris.nyit.edu/~rcody/Thesis/Readings/Krauss%20-%20Sculpture%20in%20the%20Expanded%20Field.pdf

...perhaps it is part of the mythology, or received wisdom, that says that art progresses in a Darwinian way. (See S.Gablik, Progress in Art published in the same year as Krauss set out her territory, which is essentially the same), privileging, the work of autonomous shamanistic object makers and failing to register “its interweaving with a multifaceted and all-pervasive media culture, historical amnesia and the commodification of everyday life.”