The Stubbornness of Sculpture 2 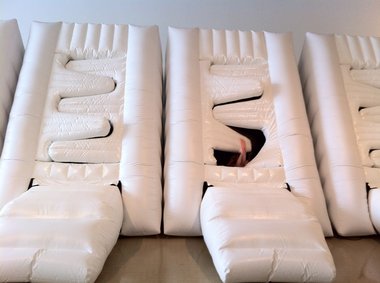 In the well-curated East Gallery, attendants actually urge you to take off your shoes and jump into one of the cells of David Cross's inflatable sculpture Lean. As I jumped in, falling briefly through darkness, I gasped and laughed loudly and uncontrollably. It was a cathartic experience in a gallery space, one I usually only get with a truly terrific painting.

In contrast to upstairs, downstairs at City Gallery is full of experiences that connect to your heart rate.

In the well-curated East Gallery, attendants actually urge you to take off your shoes and jump into one of the cells of David Cross’s inflatable sculpture Lean. As I jumped in, falling briefly through darkness, I gasped and laughed loudly and uncontrollably. It was a cathartic experience in a gallery space, one I usually only get with a truly terrific painting.

Feeling strong basic emotions like joy and fear was amplified nicely by the Sam Harrison figurative sculptures in the same room - a roughly hewn suspended carcass and, near the entrance, a female figure crouched prostrate on the floor, almost asking that you touch her shoulder to check how she is. Ditto Seung Yul Oh’s Guulddook (drape), a shape that resembles box-like plinth with a drape, or stilled white paint thrown over it. With fluidity meeting geometry, it’s another work opening up discussion about our interaction with the art object in a gallery space, asking you what “you bring to the table”.

While the East Gallery is light, the West is dark. Here eventually you notice a service doorway at the back has been propped open. Peeking in around the door, you find an eclectic array of objects in a workspace - a mixture of wooden replicas and real in situ fittings. Held from us at a distance, a puzzle is presented to determine the material difference between each. The story suggested by this engaging, accessible work about simulacra by Glen Hayward is of a janitor so bored he’s down to whittling replicas of the objects around him out of wood.

With limited ability to squeeze into Hayward’s space to examine the objects closer, do you move the doorstopper to enter, or accept that your viewing experience is being controlled? No guide is given. Such lack of navigational aids worked well for Prospect here over summer, but with this show I found myself longing for more wall text. Instead there is the awkward placement of bound pieces of A4 paper on concrete blocks and some card handouts at front of house.

Many of the successful pieces in this show look like they might leave the gallery at any time. Three giant Rohan Wealleans’ cuddly-with-teeth creatures - shamanistic superheroes that look like they could have stepped out of an experimental manga comic - are on gallery dollies. These are rather smart pieces of figurative sculpture.

As eerily and disturbingly effective as ever, Don Driver’s Ritual (inexplicably the only old collection work here) looks like its parked up en route to a pageant out in the square.

At a rate of one a week Bronwyn Holloway Smith is adding 3D printer generated miniature models of other artists work in the show to a glass vitrine in the Reading Room. None of the artists in the show know when they might be replicated, and have to buy these multiples online like everyone else. You can either buy them off Holloway-Smith or, under creative commons license, download them for free if you have a 3D printer. Self contained yet feeding off the entire exhibition (it could have easily been in the library or other nearby pubic space) this is one smart project, charged in its complexity by contemporary issues of copyright, reproduction and future changes to the art market.

Hayward and Holloway-Smith’s are two of a few projects here that operate both inside and outside the gallery (significant for a gallery which has for too long been uncomfortable operating outside its own walls). With others you wonder why they need the gallery as frame at all. The works of David Cross and Sian Torrington have typically been found outside the gallery, and Cross even stresses this point by providing an exhibition of documentation of past works next to Nikau Café (an odd addition to the exhibition).

One foot in the gallery one foot out, The Obstinate Object also extends into the city with The Active City festival sculpture series programme (see the programme here). In the vitrines as you enter the gallery is a video of a performance by Clinton Watkins and Trenton Garratt that took place at Massey’s Engine Room but was broadcast in the gallery.

Regan Gentry is already known for exploring this boundary with his Foot in the Door project. Here he extends it with his tribute to Colin McCahon, McCahon Incarnation. Water is pumped out of the pool that surrounds the west side of the gallery, piped up and in through a window in the top floor, before leaving as a waterfall from another. The McCahon nod feels like a quick joke, and the work leaves me with little beyond a short comment on the circulation of art through public space (ladies and gentlemen, the gallery is leaking).

Shane McGrath’s new permanent sculpture in Glover Park, initiated by the gallery as part of this exhibition, is a beautifully constructed, fun folly made with a poetic list of materials. A piece of playground equipment for the mind, it looks like Tatlin’s tower, an old time Helter Skelter slide, and a space rocket, with strong echoes of the architecture and trees in its surround. Nicely open to reflection, it feels odd that kids and adults can’t clamber on it or touch it. Gentry and McGrath could well be better employed providing us with actual permanent water features and playgrounds.

The Obstinate Object is a brave comment on how form is currently on the move, and how galleries are struggling to adapt. So many of the works intrinsically question the role of the gallery.

Do I sound like I’m losing faith in the modern art gallery? Sometimes I wonder. Yet, if I look at my favourite gallery experiences of the last year, including Prospect, or the best work in this show in the gallery, it utterly owns its space, making no other seem as appropriate. A great painting in a gallery will likewise make everything around it not matter. Those are what I call obstinate objects. Most in this exhibition are too uncertain to earn that title.

With the work of Torrington and Ruth Thomas-Edmond, you see artists encouraged to take over utility spaces in the gallery, yet their placement feels tentative. They could have been pushed to take control of gallery spaces even more to allow their organic growth as sculptural systems. Likewise Paul Maseyk’s strong ceramics work are placed on the floor, half out of their packing cases. Some clever ideas again, but putting them on plinths would have done them far more justice.

Like Maseyk’s pieces (moving across the old craft object and sculpture divide) we find the object in this exhibition moving between locations, surrounded by other interesting temporarily-stationed objects, not quite sure of their position.

This is rather neatly emblematic of the situation of City Gallery the institution as a whole. As it seeks a new director and senior curator, this for City Gallery is a transition show. Running longer than most exhibitions do here, it feels like a doorstopper itself. One where bold things are tentatively being tried out while the boss is away: one foot in the gallery’s past and one foot in its future.

I'd say that's a pretty good assessment. It is deja vu through a kaleidoscope. So much was explored from performance ...

Surely just a continuence of themes (pop, abjection, and minimalism in particular) filtered through postmodernism. As for performance art, that ...

Great review. Someone recently pointed out to me how similar much of contemporary art, particularly the ubiquitous genre of post ...

Great review. Someone recently pointed out to me how similar much of contemporary art, particularly the ubiquitous genre of post medium “sculpture”, is to that of the post minimalists from 40 years ago. I think that this is true to a certain extent. The 70’s photorealism in sculpture of Hanson, De Andrea and others was more formal and staid than say, Glen Hayward, but he is really pretty similar. Bronwyn Holloway Smith is in a similar mould, but uses new technology (albeit, a one-liner and a bit too similar too Karin Sader for my taste.) However, whereas that art of the 70’s and late sixties was dry, earnest formal and political, much of this new minimal, photo realist process and/or performative art are innovatively idiosyncratic and humorous. For me David Cross and Eddie Clemens especially stand out as unique departures.

Surely just a continuence of themes (pop, abjection, and minimalism in particular) filtered through postmodernism. As for performance art, that would seem to be a borrowing from experimental art and theatre - originating as a purely literary exercise.

I'd say that's a pretty good assessment. It is deja vu through a kaleidoscope. So much was explored from performance art in the 70's to Matthew Barney's Drawing Restraint in the 90's, that it is pretty hard to beat it. But then it is always hard to come up with new engaging ideas.