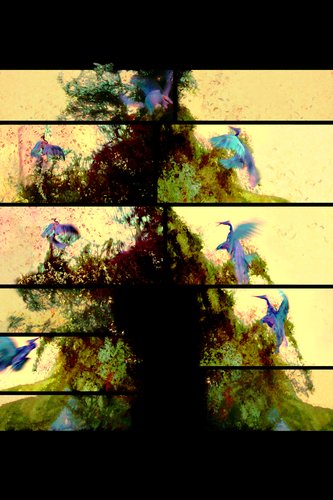 The problem was these painted photographs weren't nearly as compelling as the early films, many being cloyingly sentimental and over theatrical. With so many fluttering birds and descending bodies, one started to detect a shrilly emotional symbolism lying at the heart of Ward's sensibility.

Vincent Ward is deservedly legendary for the achievements of his early films, becoming famous in the mid-eighties because of such productions such as A State of Siege, and Vigil. Contemplative, moody, brutal, and preoccupied with dramatic landscape while tapping into primal narratives, these profoundly New Zealand works had a sensitivity to history and place that endeared him to artists and writers, and intellectuals in general.

Ward has now made ten films so far over his career, either writing, producing, and/or directing - here or in North America. At the end of last year he had a large touring show of paintings, photographs and moving image installation launched at the Govett-Brewster. A sizable proportion of the gallery, four big rooms, were devoted to an artist with no history of exhibiting in galleries (though he studied art at Ilam and was always interested in painting) only an impressive CV as a movie director. Rhana Devenport, the Govett’s director, curated it.

Soon it will come to Auckland, and perhaps elsewhere, and so the question occurs: was the exhibition in New Plymouth a success? Did it have for example the emotional intensity of Ward’s earlier, more critically acclaimed films that he is much admired for?

There were mainly three sorts of work in this show: tall vertical canvases (photographs and paint combined) that from a distance looked like scrolls; long panels of glassed over photographs butted together to make up rectangles; and an ‘expanded cinema’ moving image installation with ten possible projections.

The projected film sections were in Gallery 4, featuring usually Voyage 1 - Waystation: When I was 13 I almost drowned, a sequence of thirty-one very short films carefully choreographed in a sequence. In this Ward’s best shots were of symbolic white horses, running at night (from the film In Spring One Plants Alone, 1981) or approaching a prostrate naked man on the moonlit street of a small town. They were hauntingly poetic and vividly effective as otherworldly forces or spiritual energies, being held back to only appear rarely. The other filmic highlight was from Vigil (1984), of Toss (Fiona Kay) running down a hill to get help for her injured father.

Other images Ward had overused, especially the more recent ones made in Kelly Tarlton’s of individual naked bodies thrashing about in large plastic bags, deep in murky water surrounded by darting fish. Although the beams of downwardly projected light, rumpled textures, illuminated skin and spiralling bubbles were initially amazing, these figures soon drained of their emotional impact. You got sick of them - whether moving within the installation or still on the gallery wall. And overall in the large space, there was too much clutter with so many screens. Ward is at his best when he is dead simple - directing the viewer to primal or elemental qualities in a single image or narrative.

Of the many wall works there was really only one image that impressed, based on the film A Map of the Human Heart. Flying, seen from the edge of the eye moments before falling was memorable because of the split, repeated and close up frightened face of Avik, a gunner in a burning Lancaster bomber. Its narrative context was enhanced by the work’s grid, the juxtaposed fiery plane and Avik’s plummeting figure.

Rorschach Tree (2011) was an image which used software to incorporate scanned paint strokes onto film stills. With its intense creamy colouration and garish fluttering herons it seemed like a corny work Brett Whiteley (in his nadir) could have created in the seventies. Ward obviously is familiar with the history of painting, something readily apparent to followers of his films, but on gallery walls his images seem like a grandiose form of kitsch. He has mannerist foreshortenings in twisting figures in space, Altdorfer apocalypses with teeming crowds swimming towards the horizon, and assorted references to figures like Michelangelo, Bacon and Dore.

These painted photographs weren’t nearly as compelling as the early films, thwarted by this cloying sentimentality and theatricality. With so many fluttering birds and descending bodies one started to detect a shrilly emotional symbolism lying at the heart of Ward’s sensibility. This is most obvious in his late eighties film What Dreams May Come, a wildly imaginative but syrupy tearjerker (with Robin Williams) that ends up retroactively contaminating an earlier work like Vigil - when you ponder the expressionistic slanted trees (they’re like woodcuts) passed by Toss’s father while he is moving along the skyline. Likewise the birds in the gallery destroyed the white horses on film, an early work being damaged by what came afterward. What once seemed restrained and potent, later became histrionic overkill.

With this exhibition the main problems were the repetition (it could have been pruned back to take up half the space) and the conservative (pre-modernist) nature of Ward’s notion of what painting should be. Here his approach was not really appropriate in a gallery founded to support work that is experimental or cutting edge. It didn’t suit the spirit of the venue, or the Govett-Brewster’s history. Just a selection of his earlier films would have been so much better.

Ward is a brilliant director. Did his experience as a director translate to the “fine arts”? Although underwater video is ...

Ward is a brilliant director. Did his experience as a director translate to the “fine arts”? Although underwater video is certainly nothing new in the art world, his quirky sensibility and technical virtuosity has for me added breath of fresh air to this genre (from Bill Viola onwards). I agree that some editing (especially the "painting"...perhaps editing out entirely) would have improved this potentially intriguing exhibition.