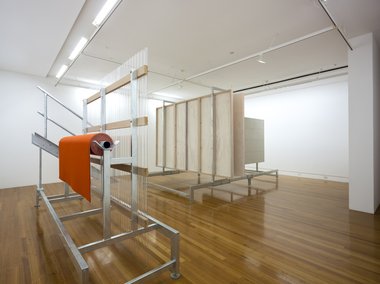 You move around their 'screens' of clear corrugated plastic, unfurled roll of orange carpet, double-walled ‘Bruce Nauman' plywood corridor, and intersecting walls of small tiles - and ponder ways to look through or around. One, with the carpet, has a set of steel steps that lead nowhere, and emphasises walking - along flat surfaces or over obstacles. The other stresses corners and blind alleys. It has a Naumanesque / Beckettian feel, thwarting your perambulations.

Derrick Cherrie is probably best known for his remarkable set of oddly shaped wood and vinyl sculptures made in the late eighties, mesmerising variations of hybrid domestic furniture that blended together beds, gymnasiums and swimming pools - and made you wonder what human urges would they satisfy. Like other artists such as Julian Dashper and Dale Frank he has also made innovative forms of sculpture that seemed to be wildly three-dimensional painting. Both these and the fetish-beds connect to his current show at Te Tuhi - an exhibition sited both inside the building and out, and which looks as if it has been cleverly constructed out of large elements formerly used as wall displays in a DIY/trade supplier like Bunnings.

The viewer’s body is alluded to in both cases. In Reeves Road his towering weatherboard and glass sculpture, just down from the even more conspicuous Parekowhai, seems to reference two uneven, vertical lungs (inside these two huge cases are horizontally protruding cigarettes and built in air vents) while in the Te Tuhi building his installation of two steel, wooden, plastic and ceramic sculptures reference investigative ocular scanning and tentative body movement.

Cherrie‘s outdoor sculpture Landshaft has a constructivist mood with its rhythms of thin parallel vertical slats and glass end panels. Held high in the air on galvanised steel stalks anchored securely in concrete foundations, the two story high planar walls (consisting of faded weatherboard panels) are partially hidden by the projecting brownstained vertical slats. Near the righthand edge is a thin vertical window cut into both layers, airy screen and dense wall cladding.

Because Cherrie is so inventive in his treatment of the two wider sides, moving around Landshaft brings constant surprises. It is architecture as much as sculpture, a minimal, very skinny, pole house that dieting beanpoles could squeeze into if they held their breath.

Over in Te Tuhi’s indoor gallery space this artist shows his skill in installing two related sculptures - also perched on galvanised steel girders - so they look absolutely perfect in their positioning spatially in relation to the surrounding walls. You move around their ‘screens’ of clear corrugated plastic, unfurled roll of orange carpet, double-walled ‘Bruce Nauman’ plywood corridor, and intersecting walls of small tiles - and ponder ways to look through or around. One, with the carpet, has a set of steel steps that lead nowhere, and emphasises walking - along flat surfaces or over obstacles. The other stresses corners and blind alleys. It has a Naumanesque / Beckettian feel, thwarting your perambulations.

This pervasive humour also means that instead of architecture (like outside), it seems as if these planes reference painting, small animated (but thick) walls - hovering in midspace well clear of the floor or ceiling - pushed under our noses to contemplate.

There is also something about the way Cherrie has used horizontal galvanised steel frames in the gallery to hold various components up in isolation that suggests letters in a word, words in a sentence or pictures in a rebus. This project is not so surreal or fetishistically literal as his very early work but more formal as an offshoot of say Haim Steinbach. It probably is the best work he has done since the Surface Tension, Proluxe and New Again works of the late eighties; even better than the popular early nineties touring installation of Supraluxe Suite (a project I consider weakened by including some toylike small beds). Sculpture is not often seen in galleries these days, and even when shown it is rarely brilliant - so Constituent Parts is very special.

Well I think he likes to play the role of being an anti-stylist when it suits him. Just for the ...

Probably because I'm a predominately residential architect, I've always admired Derrick Cherrie's work - its sense of scale, its funny/dumb focus on the domestic, its polish and obsessiveness. I haven't seen any new work for some time but here he seems to have moved from designing interior/backyard domestic accessories into architectural sculptures which are convincingly architectural. He'd give many an architect a run for their money on the design excellence front. The outdoor piece in particular reminds me of John Wardle's work in Melbourne. (And it's here I recall the cabin the built on Te Papa's terrace, though that wasn't quite so styley.)

Well I think he likes to play the role of being an anti-stylist when it suits him. Just for the hell of it. The game of a non-smoker seemingly (with distance) obsessed with cigarettes.
http://eyecontactartforum.blogspot.co.nz/2009/11/love-is-just-four-lettered-word.html
http://www.eyecontactsite.com/2012/02/smith-curated-show