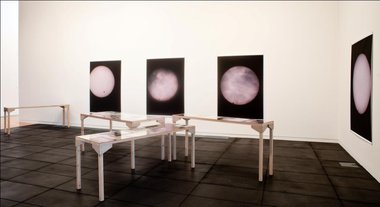 This exhibition's scheduling with the Transit, its physical proximity to Wellington's Carter Observatory and its attention to some moments when New Zealand has had an impact on astronomical observation and parallel photographic innovations, all underline the point that in photography and astronomy physical coordinates do matter.

I can’t recall finding an exhibition simultaneously as fascinating and as dull as Dark Sky. This suggests I may not be its best reviewer. And yet, my struggle to reconcile the exhibition’s ideas with my actual experience of it in situ interests me. It points to Dark Sky’s significance as a rich curatorial exploration of ideas and form.

Brought together by Geoffrey Batchen (a leading international photo historian who joined the Victoria University staff in 2010) with Adam Director Christina Barton, Dark Sky is a group exhibition of images of the night sky - views of our universe. Yet such a description belies the breadth and depth of thinking that marks out this very smart and sharply focused show.

As Barton says in her introduction to the catalogue, this is an exhibition about the nature and history of photography with “its subject the skies above us”. It is as if looking into the night sky we are always looking at a piece of photographic paper on which light has made its marks across its time of exposure. That the way we mark out our world with our cameras correlates to how, when we measure the movement of the stars, we reach out to our outer boundaries to look inward.

Batchen beautifully articulates the thinking behind this exhibition in an accompanying published text, but I found the actual exhibition a more mixed experience. I was reminded of my observations of the night sky: moments of wonderment, patches of disorientation and tracts of dullness. Those more interested in astronomy may well feel differently.

Brought together to coincide with the observance of the Transit of Venus, the exhibition contains both photographic artefacts (many of them Batchen’s) and artwork to consider the different historical approaches that have been made to photograph the night sky. From the contemporary work of international photography stars Wolfgang Tillmans and Thomas Ruff, to those views captured by astronomy and space agency led photographers for exploratory purposes, the crossover is refreshing and also in fact reflected in the approach of the likes of Tillmans and Ruff. The collection of images that mark a history of capturing images of the surface of moon alone are fascinating.

‘Dark Sky’ is the name given to the movement that works to reduce the light pollution that disturbs the viewing of the stars. It has led to the provision of dark-sky reserves where there is a zero light pollution policy. New Zealand has, unsurprisingly, one of the largest reserves. This exhibition’s scheduling with the Transit, its physical proximity to Wellington’s Carter Observatory and its attention to some moments when New Zealand has had an impact on astronomical observation and parallel photographic innovations, all underline the point that in photography and astronomy physical coordinates do matter.

Elegantly, the exhibition itself presents one large dark sky with movements of line across it. People talk of New Zealander’s propensity for black in their art - this exhibition is about as black and austere as it gets.

Not long after entering the gallery a staff member thrust a loan copy of the catalogue into my hand. The implication was that I might be needing it. Indeed, the show was far more engaging after having spending some time at home reading Batchen’s essay. In it he does a great job of charting a course for us through his gathered material, yet that thread isn’t followed in the gallery. It instead feels jumbled. This in part comes down to the trickiness of creating any kind of single throughline through the Adam’s spaces to create a narrative.

The opportunity to make your own connections, draw your own map is something I usually relish in a contemporary art context. Here there were too many frustrations.

Is the fact that a viewer might have to do some reading to engage with an exhibition such a bad thing? How better can we accommodate this sort of experience? This is a university gallery after all, where a tighter subject focus has more relevance.

As a general viewer, no matter what the conversation beneath the works, an exhibition of night skies poses some of the same problems as a show of flowers. For example, I find Thomas Ruff’s work STE 1.19 (02h 48m/-35º), both beautiful physically and fascinating in the way it talks about the distinctions between the artistic and scientific image. He adds his own star to an enlarged image taken by a telescope in the Andes in the 1970s (an image which as its title tells us is quite specific in its coordinates). Yet, viewing it in a room full of other large-scale night sky views Ruff’s work loses its magic particularity.

Likewise, I’m grateful to be able to see from the Te Papa collection a whole suite of 15 of Eric Lee Johnson’s 1950s long exposure experiments with photographing star trails and the night sky. Ultimately however I don’t find them artistically interesting enough to warrant that much attention.

The examination of the intersection between art, science and technology through the medium of photography is strong here. A range of works track movement in the night sky. They are well grouped in the essay but in the gallery frustratingly spread. David Stephenson’s star drawings, where the camera is moved in a predetermined manner between multiple exposures to make patterns, suffers from not getting to visually relate to the early 19th century experimentation of Pierre Jules Cesar Jannsen’s ‘telescopic gun’ (a circular sheet allowing for timed shutter openings) and Simon Ingram’s painting machine.

Ingram’s machine marks black paint onto a canvas in actual time in response to electromagnetic energy captured by radio astronomy equipment and a dish visible outside the gallery. As Batchen notes “Ingram’s is a painting produced like a photograph, in that it is an image physically generated by what it depicts.” Again - conceptually fascinating but physically dull. This work doesn’t have the intriguing visual beauty John Hurrell notes of Ingram’s recent radio paintings shown at Gow Langsford.

Stella Brennan has produced two digital prints based on photographs taken in 1982 by the Venera space probe of Venus’s surface. In the gallery these feel isolated and ineffective, separated from the other more effective component of her work - a simulation (working with scientist and artist Dr Ian Whalley) in the gallery’s lift of sounds you’d hear on Venus that are based on the electronic data Venera 13 collected. Brennan takes us imaginatively into the experience of another planet, leaving us to wonder what is that is rattling the building and what are Venusian winds - and musing on the limitations of technology and our own senses. The novelty of sitting in an elevator brought to mind the song ‘Space Oddity’ and its image of “floating in a tin can”.

In fact I am far more interested when the human moment and its history on terra firma come into play. Ann Shelton’s exquisite June 2004, Onaera Beach, Taranaki, Looking North-East before Dawn, is an exhibition highlight, an interesting contrast to Ruff’s in its also being fixed in position - but framed by cultural and personal context. The lightening sky at sunrise is framed by the dark hulks of the landscape at the bottom and a spooky penumbra smudge hanging above. In the middle, the camera’s long exposure also captures one short sharp line of Venus’s movement, like a falling star cut into the surface.

It’s a beautiful piece of visual music as much as anything. Batchen notes Shelton set out to photograph the Matariki cluster but that got “swamped” by the brightness of Venus, providing a side commentary on how the west’s cultural view of the sky has so often been placed on top of an indigenous one.

There are two exceptions for me to this show’s tight focus. It is nice to see Colin McCahon in a different context, and his impressive, expressive painting Venus and Re-entry: The Bleeding Heart of Jesus is Seen Above Ahipara is paired nicely with Shelton’s work, yet it pushes the exhibition out to other threads it doesn’t follow. The inclusion of John Timberlake’s Another Country XIV, a photograph of a painted mushroom cloud observed by small toy figures, opens it out even further.

Wolfgang Tillmans is a keen amateur astronomer whose pink-tinted photographs of the Transit, with vitrines showing a collage blending his own work with disparate found images and newspaper cuttings, puts space exploration in a political and social context. The way he jumpcuts from one form of contemporary photographic representation into another provides a succinct analogy for the entire exhibition.

It’s just a pity that this work doesn’t sit closer to the panels of Hermann Krone’s photographs from the Auckland Islands at the time of the 1874 transit. These, like Tillmans’ work, provide interesting takes on the museological display.