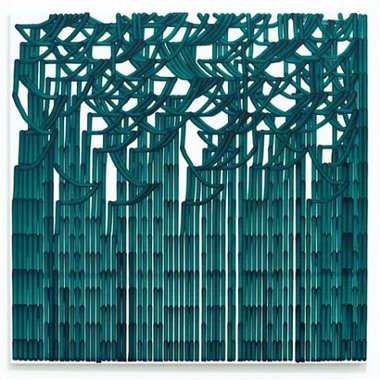 I much prefer these works to his earlier paintings of the parallel Automata / Assemblages series. The process and its logic is clearer and less convoluted. In a sense, it is - despite his intervening manipulations and formal choices - like a form of printed impression that incorporates time, comparatively uncomplicated and more candid.

Simon Ingram is well known for his robotic paintings that ‘paint themselves’, their activities nurtured by his considerable knowledge of Artificial Life, programming and algorithms when applied to art processes. This show of eight new works introduces a further development, his interest in various invisible and inaudible forms of energy found in the earth’s upper atmosphere - in particular VLF (very low frequency) radio waves. These are emitted naturally by electrical phenomena (like lightning) or the electromagnetic fields of solid bodies in space (like planets), or they can be artificially generated, used for example, by naval bases to communicate with submarines.

Ingram has built a radio telescope to encode and transcribe these waves, and to note fluctuations in signal intensity caused by events like solar activity. He can record uniform signals over a period of time as a series of parallel lines - using regimented strokes of machine applied oil paint - and illustrate with triangular spikes where frequency levels rapidly rise and fall.

These paintings become a variety of graph - like medical examples for the autonomic nervous system - but where x and y axes move around and formulas reorganised. Some are like Venetian blinds, others like Polynesian current maps, others still like balls of twine or ripples of water. The names of various international transmitters have provided his titles.

Now a number of contemporary artists (like Susan Hiller) have an interest in recorded radio waves but usually not to make paintings. And Ingram is not trying to discover profound messages or encoded images from Beyond - as in the title of a famous painting by the late Sigmar Polke: Higher Beings Command. God is not dictating missives to us through the telescope (in the case of natural waves), nor is the military (for artificial ones). This is Ingram’s gig, no-one else’s. He is in control of the programming as a tool for making images that hold your attention.

One of the reasons that they do is the dramatic slivers of light peeking through from behind the dark shimmering lines. Another is the complexity of each painted line trajectory that sometimes overlaps or dives under its neighbour, despite the sequential order of paint application usually being clear. One other plus is that this form of explorative painted drawing can look spontaneously impulsive once its paint application and mark making variables are set up. It has the appearance of cohesive, albeit at times frenetic, thought.

So if it looks like thought, one wonders do the radio wave transcriptions have meaning as an art presentation - in the sense of can something outside the artist contribute to the image on his/her behalf, or even take over? Wave behaviour A results in mark pattern B - that seems like an indexical correlation where the artist is just taking dictation. But Ingram’s intervening creative role usurps that. The choice of manipulable formal options remain his expression, his enthusiasms, and his tastes, and is a tool like Australian performance artist Stelarc’s robotic third arm, for example is. The device is not calling the shots, but is ‘wired to’ or driven by the inclinations of the artist.

Furthermore what strikes me - and I was unprepared for this - is just how beautiful Ingram’s semi-transparent oil paint looks as delineated substance - the way the stacked or leaning lines are darker at their parallel edges and thinner in the centre, like cellular stems. Sometimes they look like spilling audio tape, stacked tubular chairs, piles of pamphlets separated by scrunched up rubbish, or bamboo screens. Highly evocative.

I much prefer these works to his earlier paintings of the parallel Automata/Assemblages series. The process and its logic is (in my view) clearer and less convoluted. Ingram has taken a natural phenomenon and invented a way of getting marks from it with a technology that no longer presents the illusion of thinking. As we all know about radio spectrums anyway, his skill at manipulation is more overt in the way the VLF waves correlate with the total image. In a sense, it is like a form of printed impression that incorporates time, comparatively uncomplicated and more candid. Less meaningful or suggestive perhaps (unless you are fascinated by physics and know of some underpinning scientific metaphor) but I think better.