Off the Leash at Dog Park 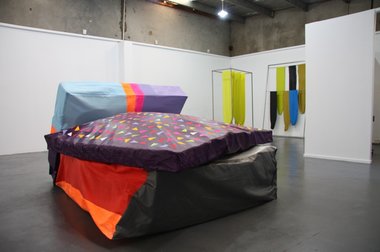 Miranda Parkes and Helen Calder
Nice to Meet You

Dog Park is a non-profit art project space that opened in June this year and looks set to fill the gap left by the closure of the ABC project space which closed in February. It received initial funding from Creative New Zealand’s emergency Response Grant and it’s nice to know it’s being supported by the business community with building supplies from PlaceMakers Riccarton and the essential refreshments by Sacred Hill Wines. Good on them. Dog Park is a response to the venue shortages following the Christchurch earthquakes, and embraces the challenges of contemporary and interdisciplinary art. A book shop is in the works.

Their first show, Nice to Meet You was a collaboration between two Canterbury artists known for their rethinking of painting as a spatial medium, Miranda Parkes and Helen Calder. Parkes is of course best known for her brightly keyed, bunched and ruched canvases and Calder for her continuous drip paintings that meddle with the illusion of process.

Nice to Meet You continues the exploration of painting’s explosion into the gallery space. Theorists like Gustavo Fares of Lawrence University have often tried to apply Rosalind Krauss’ “expanded field” to painting, usually citing the addition of movement, performance or three-dimensionality - but perhaps they would have been better off leaving it to the artists. Lucio Fontana was already investigating “spatialism” in the late 1940s and incorporating gesture and performance with slashing and scorching to neutralise the illusionary window of painting. Robert Rauschenberg was making his “combines” in the 1950s and Frank Stella started producing his “shaped canvases” in the 1960s. During his short career, Yves Klein was putting his name brand shade of vivid aquamarine everywhere and on everything. Most recently Jessica Stockholder, Katharina Grosse and New Zealand’s Judy Millar have incorporated architectural elements so that painting may be experienced by being walked around or through - somewhat like Baroque architecture or Wagner’s Gesamtkunstwerk.

Parkes has long conflated pictorial and architectural space in her works, and in Nice to Meet You we see Calder working with colour in three-dimensional space in a much more expansive way than in earlier experiments. It is very much colour which harmonises the contributions of the two artists. Parkes’ canvasses have morphed into something resembling the abandoned mattresses of an orgy in riotously bright colours - blues, purples and orange, but with the familiar saggy bagginess of the rest of her oeuvre. Calder’s dripped blobs of house paint in sour limes and olive greens, blacks and solitary cyan have dried into flaccid skins hung on an armature like washing on a line.

For me there is a sense of abandonment, and of a kind of allusive domesticity, but this is probably reading far too much into abstract work. The relaxed and non-rigid materials and the deceptive casual randomness of their appearance allow the two elements to have a conversation, but there is also a distance - two distinct personalities at work. This sideways abject note brings in a feminist note, and indeed there are strong echoes of the works of Eva Hesse and the “cells” of Louise Bourgeois - though without Bourgeois’ overwhelming air of fear and pain. The one-off orange note in Parkes’ Claes Oldenburg-does-Tony Smith installation chimes with the one-off cyan blue Resene drip in Calder’s work - contrasting colours on the colour wheel. I think it might have been even more interesting if the two separate components interacted physically as well as visually, just to see what synergies would occur.

Seeing is so hard to argue for with photographic images, or varying lighting conditions - and even face to face ...

I'm not sure that observation is sufficient to wrestle the bowler hat of pedantry from my head, John.

Hi Roger, DP is run by myself, Ella Sutherland and Barbara Garrie. I think you must have been in a ...

I think you are right Andrew, about 'the sense of abandonment' and 'allusive domesticity'. That's no conflict with abstraction though, which will always be accompanied by associations. Who said it had to be pure?

I've always wondered if Parkes has ever heard of Angela de la Cruz as her work is practically indentical, just a decade later...

Wow! A new art space, with funding from CNZ. Right here in the exhibition-space-hungry Garden City. That certainly is great news Andrew! Thanks for bringing it to my attention.

As you know, I'm located in Christchurch and 'boy-howdy' am I ever grateful for the existence of the space and the self-starting initiative of whoever pulled it together on the QT. Brava! Who was it? I knew the ABC crew but am in the dark about the new alternative art impresario(s).

Coincidentally, I was fortunate enough to have run into the two painters Miranda Parkes and Helen Calder (hope y'all don't think this is me name-dropping) not too long ago... but they must have been keeping a tight lid on the space and their upcoming show?

As an out-to-pasture NYC event producer (an old day job) I can certainly appreciate the extra mileage one gets from a pulling off a 'surprise' event.

And gosh, I sure am Surprised. I would love to have had the chance to see the show in person. Although I get a pretty get idea from the pictures and text in the review.

Lucid bit of on-the-money critical text, by the way. As an aside - I'm a huge Jessica Stockholder fan but have never understood the unwarranted fuss over Katharina Grosse's operatic bloviations.

Boy oh boy. Here I am waffling on and on again like that excitable, fictionalized, motherless, 6 year old boy from the sleepy southern town of Mayberry North Carolina. Maybe that's why I feel so at home now.

Pedant of the week. International Klein Blue contains no green so can't really be called aquamarine. Cyan blue is also a green-blue; Calders' anomalous 'skin' appears to be either cerulean blue or a pale cobalt, it is probably being greened by the surrounding colours.

I wouldn't place too much faith in the accuracy of photos, Owen. There's lots of variation...

I'm not sure that observation is sufficient to wrestle the bowler hat of pedantry from my head, John.

Seeing is so hard to argue for with photographic images, or varying lighting conditions - and even face to face with the work, one's own retinal responses vary from eye to eye. Let alone when trying to persuade another person...

Hi Roger, DP is run by myself, Ella Sutherland and Barbara Garrie. I think you must have been in a cave or under a rock, or in a cave under a rock that week as there was over 100 people at the opening and about the same amount visiting over the last month, hard to know with no High Street I guess but anyway, join our Facebook page and come along to the opening of Matt Galloway's show this Tuesday, I slipped a poster under your office door yesterday. www.facebook.com/DogParkArtProjectSpace