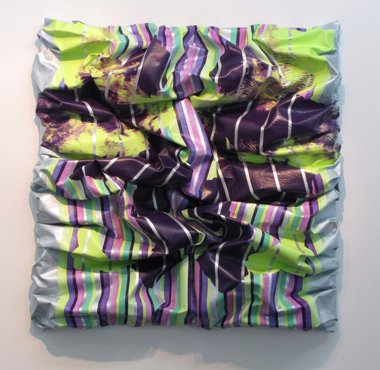 It is these odd layerings, with illusory ‘gaps' in each surface and contrasting patterning or brusherly activity underneath, that bring the paintings to life. The best ones, Smasher and Little Smasher, are deceptively complex.

In this assortment of nine new paintings from Miranda Parkes, not all are of the characteristic baggy-saggy cushion-cover variety she is now well known for. There are a couple of flat ‘normal’ canvases with fluoro colours that hint of Andre Hemer, though no masking tape is involved. One image hints at an autopsy with the exposed cross-section of a brain, the another of a bright green island on a murky brown reef, surrounded by wavelike coloured contours, clinging op art ripples.

About two thirds of this show are puffily voluminous, and with them Parkes seems to have rediscovered her powers of invention, because for a while her works were becoming drearily predictable, with quite ordinary patterning behind the folds and sags. And the wrinkled squidgy qualities bring to mind Matisse’s comment that paintings should be like armchairs for exhausted businessmen to rest in. (Perhaps only a banker’s son would say that?)

Many of these new works impress with their carefully controlled fragmentation. The wrinkled surfaces are integrated as a planar continuum, yet the differentiated areas contradict each other, with smeared gestural paint peeking out though the seemingly regimented stripes, and oddly patterned clusters of warty blisters or long drips also detectable under the silver metallic paint. Each baggy striped ‘skin’ seems wildly improvised before it is hung on its supporting square-shaped stretcher.

It is these odd layerings, with illusory ‘gaps’ in each surface and contrasting patterning or brusherly activity underneath, that bring the paintings to life. The best ones, Smasher and Little Smasher, are deceptively complex. It takes a while to realise for you have to look closely to find the edges of apparent inner spaces, systems or nonsystems in stripe coloration, and smudged bars or scudded scraped lines of pigment. Clinging tightly to their distended bulges such methods of wild improvisation make these oddly conceived works quite remarkable.

The non-baggy ‘island/fluoro’ paintings are interesting too. They go beyond the simply weird but are not as compelling as the two Smashers - being not just gimmicks but also being not fully resolved either, and too close to Hemer’s colour sense perhaps. The Smashers make the show worth visiting. The best work Parkes has done for some time.

Thanks for that. I've read it several times but it must be apocryphal.

Thanks for that. I've read it several times but it must be apocryphal.