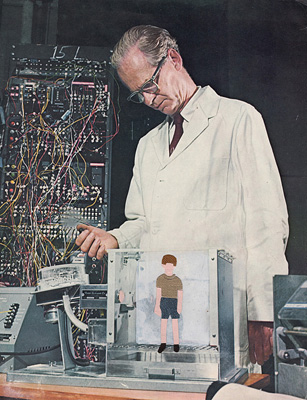 Hurley seems to be satirising pediatrics and pedology, ridiculing adult attempts to understand the minds and behavior of children. (They appear to be the focus of his attention - not toy replicas.) He seems particularly amused by the idea that children could be perceived as miniature adults.

Three very different sorts of artist are juxtaposed in this Melanie Roger group exhibition, with no linking intertwining theme, but instead showcasing their separate individual characteristics.

Gavin Hurley presents collages and small canvas paintings, the latter sometimes enlarged versions of the former which feature unusually textured light fabric taken off the outside of old book covers (or boards) - not dust jackets. Much of the imagery involves scientists examining the physical properties of a boy doll, documenting its body, testing its behavior, dismantling it and seeing if it has a brain.

Hurley seems to be satirising pediatrics and pedology, ridiculing adult attempts to understand the minds and behavior of children. (They appear to be the focus of his attention - not toy replicas.) He seems particularly amused by the idea that children could be perceived as miniature adults. One particularly droll painting is a portrait of a fresh faced boy wearing a curly-textured fake beard.

The three photographs from Peter Peryer show why he is so widely admired. Buddha’s Hand is the name of a type of citrus fruit found in China and Japan but Peryer’s black and white image of one makes it look like a hand suggested by an inverted and gnarled clump of roots or a misshapen pepper. The puffy and curled clawlike ‘fingers’ look deformed and arthritic - grotesque and sinister - making the image oddly disturbing and very memorable. One of his best ever.

Carcass looks like an image in the tradition of Soutine, Bacon and Rembrandt, but its red coloration looks odd, as if hand applied, and the stripes of the background awning seem slightly wonky. Here Peryer has used a small model - not a butcher’s shop - so its subtle incongruities are part of its appeal. Likewise the two concrete birds in Penguins that could almost be holding hands, if flippers could do such a thing - suggesting a tender ornithological romance.

Emily Wolfe’s realistic paintings of patterned shadows created by light passing through flapping muslin curtains I find anaemic and too dreamily slight. Romantically vague and inward with their faint dappled forms flickering on bedroom walls, her images are ethereal, insubstantial and transient, creating a different sort of contemplative mood than other related ‘painted light on objects’ artists like say, Jude Rae. In contrast the tonally more vigorous collaged and photographic images of Hurley and Peryer, though smaller, bring more visual and ideational drama to the Roger space.

Poor old Robert Hughes. May he R.I.P. I often disagreed with his content, his reactionary attitudes and his taste - ...

“You can’t be a critic and not have a harsh side, you know, because otherwise you turn out to be ...

This Discussion has 19 comments.

I think you are rather hard on Emily Wolfe's painitngs 'anaemic ['? ] 'Too dreamily slight'? How much 'dreamily slight' is allowable? -- none? & you don't see these photo-oriented paintings as related to either photography - or to Dutch interior painting -- Pieter de Hooch/Vermeer? -- or Glenda Rnderson -- or to Proust's descriptions of light in bedrooms -- pictures [window frames] within pictures & the composing of picture by -- as you say transient light -- 'found' pictures' -- I admired the scrupulous insistence on keeping to all the particulars of the rooms recreated -- & why not room spaces rather than Jude Rae's clusters of objects -- I would have liked to see them one at a time in a bedroom or sitting-room rather than in a gallery -- making virtual walls & windows.

Sure,I agree with most of what you say here, though putting them in a domestic space - not a gallery (even by themselves) - makes them part of an installation where they interact with other (nondepicted) windows and curtains, and where shadows might fall on their surface and destroy their spatial (pictorial) qualities.

Why do I say 'Too dreamily slight'? Well they remind me of David Hamilton photographs of young girls in nighties, taken with vaseline over the lens so that the light is diffuse. Okay I'm being extreme (Hamilton is such junk) but the filmy nature of the curtain and the mid-tones of the shadows make them seem somehow adolescent in their mood. There's a longing, an escapism, that irritates me. Very hard to pin down.

David (pedo) Hamilton is too harsh a comparison, so staged and so cynical. Emily Woolfes' paintings seem contemplative and atmospheric, a more charitable comparison would be Andrew Wyeth.

It is the adolescent dreaminess I'm getting at. All that gauze with the filmy light. Hamilton is schoolboy and this is schoolgirl, but not in a sexual sense, obviously. There is an aching there with the breeze and evanescent flickering glow.

John, seems to me to be the ache of nostalgia, which is diametric to the adolescent pain of an uncertain future.

But that looks to the past & implies perhaps a time of innocence. The present makes more sense.

If you are looking for 'more visual and ideational drama', that is exactly why these paintings will disappoint you -- they are undramatic, no moral rhetorical force -- everything they have is in the play of light & play with illusion. The painting with the 'window', seen at an angle and the painting of a 'window' it makes on the wall -- that is the one that struck me as being the one that does the most of what this kind of painting can do. I'm now interested to see how this develops. I think you may be missing something interesting, if you look at it as mere prettiness.

So I'm wondering what you could be referring to. Sounds like you are thinking about the arrangement of the planes in relation to the light, and the resulting composition. Or is it something else entirely like manual skill?

Is it crucial that the image under consideration be a painting and not a photograph? ...and not a stage set (or installation) with a window and a light that you can move through and around?

I was looking at the painting that becomes a window, that it is implied it is the source of light for the projection of a window on the wall - all simply &, I guess, logically set out -- not to mention the old notion of the picture itself as a window. As to the paint work & the quiet of it, I am thinking something like the look of a Gwen John. [& undramatic Gwen, unlike the aggressive energy of her brother].
I was wondering how long it would be before you'd suggest it was girly, so does that mean that the undramatic is not macho enough?

I'm quite happy to be criticised over things I've written or verbally said, but speculative innuendo on what I'm apparently about to say is more than a little peculiar.

"Hamilton is schoolboy and this is schoolgirl", you said.

I certainly did, but my point was the commonality found in both - the adolescence and a kind of longing - not a gender-specific sneer.

Your strings of predicates "anaemic and too dreamily slight. Romantically vague and inward with their faint dappled forms flickering on bedroom walls, her images are ethereal, insubstantial and transient" are not descriptions of poor painting. & then you say, with no clear justification, that this is an effect of girlish adolescent dreams, as if such dreams are worthless. These are indications only that your response is narrowed to painting with strong, dramatic subject matter.

Given that your 'opinion' [or perhaps, more properly,'prejudice'] results in a judgement that may be damaging to the artist concerned -- & to her friends family & dealer -- one would expect you to go further than dismissing the subject or the so-called mood. Serious and intelligent work deserves better use of your critical power.

All critics and all art historians have their own tastes (or prejudices) and there lies the interest in the subject: comparing notes and pondering what is worthy of prolonged attention. And what is not.

For most art writers the easy way out is to say nothing about your dislikes (if those artists are lucky they'll get a description) and only promote your enthusiasms, gingerly attempting to tread on as few toes as possible. What you call 'deserving' and 'serious and intelligent work' is not something that is self evident. There is no template for determining such qualities.

Not all critics ride their prejudices, arbitrarily, as if the critical act is all about them, their 'taste', & not about the artist's work, & the artist's 'taste', judgment & intelligence. Criticism needs to take as much time, patience & intelligence as the work took to make it, or so I have been told.

That means attempting to lay aside prejudices, such as not liking the colours, or the girlish sentiment, or the subject of muslin curtains in windows, or, in other cases, the oafish look of the work. A process of reflexion is necessary on your own positions, By no means infallible, of course. But a better chance that way of understanding what the artist is doing. Otherwise you're a judge in court sentencing someone to 10 years in prison, because he doesn't like their face.

This is from experience. It ha happened before: If you continue to ride prejudices, as you do -- & proudly -- then you will find that your readers will know the best artists are probably those that you dislike. & artists will start to wear it as a badge of honour, when you make dismissive remarks.

I have discussed most of these issues with you earlier on the Jim Allen thread. I think it is obvious to most readers that my comments are responsible and that I give palpable reasons. Most people know for example what 'clumsy' means. It is not semantically mystifying. You seem to think the critic's job is to write public relations blurbs for the artist and that the artist's actions should never ever be questioned, but there are plenty of worshipful publications around that do that already. Instead I'm trying to elucidate the ambivalences I (and others) sometimes have about particular works or artists - and that undiscerning blind faith is something to be avoided at all cost.

“You can’t be a critic and not have a harsh side, you know, because otherwise you turn out to be a sort of Pollyanna …become this total arsehole who wanders around the world thinking every sprig of clover is a rose.” Robert Hughes

Poor old Robert Hughes. May he R.I.P. I often disagreed with his content, his reactionary attitudes and his taste - but God what a wordsmith! A wonderful communicator; a glorious educator in terms of generating interest in art history.