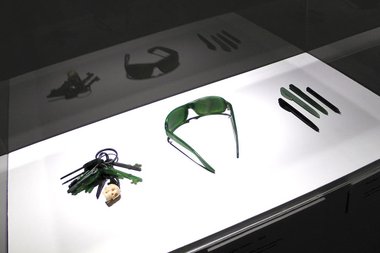 One of the great pleasures of Sheehan's work is how his many approaches to jade and greenstone demonstrate its exquisite variety. Through carving he makes it a filter for light (a carved pair of sunglasses for example), at the same exposing more of its innate beauty. Yet he also sometimes approaches it as a compressed unit of energy or currency as a series of a singular forms - like batteries or a set of ingots.

I’m a little wary of the sculptural strategy of casting everyday objects in different material. There’s just such a lot of it going around. Clearly such work speaks to the fact that, with digital advancement and our accelerating and unsustainable accumulation of so-called disposable ‘stuff’ we’re in an intense period of questioning materials’ worth, values, and its potential meanings.

Such work often matches a witty visual hook with technical skills. Then, if you’re lucky, some reference points emerge from the relationship between material and form (Regan Gentry’s pumice in the shape of a bomb - boom Lake Taupo explosion). Then: nothing. The party trick is over.

Yet, I generalise. As with anything, some work is simply better than others (Gentry for example can pull out some pearlers). And so it is with Joe Sheehan and stone. A survey of ten years of his practice reveals not just an extraordinary craftsperson with smart ideas but an artist capable of taking us far deeper.

Yes, there are lots of clever, beautiful conversation starters here. I covet having his glowing pounamu teacup and saucer on my shelf; or installing his pounamu lightbulb (fully functional) in my room. These are exquisite. Where I really get excited, however, is when embedded in the object is a more active complexity. As if, in light passing through the marbled stone, pathways are created through a complicated cultural landscape. Craft object turns art object.

There are a couple of threads running through Sheehan’s practice that gives it some bite. Firstly, there’s an ongoing investigation into the value of the materials he uses. Sheehan began working in pounamu. He trained in his father’s commercial carving studios. This exhibition tracks his exploration of the issues around its trade, historical and contemporary.

Value lies in far more than just financial, industrial or tradeable worth. Take here a playable, pounamu audio cassette tape, containing a recording of the Haast River the stone is from: an elegant expression of how stone has a place, and embodies the stories and life of that place. Likewise, Sheehan exhibits pounamu 45 inch records, holding recordings of the stories in the stones’ grooves.

Sheehan found that the once abundant greenstone his father used was increasingly no longer there, so has moved into working with other materials. Final Cut is a series of beautiful sizzors made from the last slivers of stone he had. Their forms are reminiscent of carved Maori manaia figures (a messenger figure between the earthly and spiritual worlds) and the beaks of native birds, themselves endangered.

The Non-Rechargeable series from 2007 sees the form of AA batteries carved from various jade and placed on black and white Craig Potton landscape images, replicating a battery pack’s cardboard backing. A stone like this has a power charge, but they can’t be replaced. There is nothing disposal about them. The plus and minus signs etched into them indicate life involves a balance: you have to put in for everything you take out.

Recently Sheehan has started working with other local stone, but not those you might expect of a carver.

The results are mixed. An old television made out of greywacke is a lumpen obvious statement compared to other work. Nearby though the crush marks of human use animate a crumpled up plastic bottle made from the same stone. We can imagine turning it in our hand, then stomping it back down into the rock, as if we might crush what we have sourced from the earth back into place. Then there’s just the simple amazement that something so heavy could be made to look so light. Carrying the title of Mother, what might seem like a light gesture ends up taking on a lot of weight in terms of thinking about how we treat the material world.

This play with weight is explored further in a recent work Words Fail. A series of fallen letters look like a scattered pile of wrinkled inflatables yet are made of Carrera marble. There’s the sense for me here that words need to be connected to their roots, or they float away and ultimately crash. I found my inability to string words together from the letters frustrating, and I questioned why he’s now working in Italian stone. The more this continued to tease me however I began to realize that might be Sheehan’s point - our language comes from someplace else.

One of the great pleasures of Sheehan’s work is how his many approaches to jade and greenstone demonstrate its exquisite variety. Through carving he makes it a filter for light (a carved pair of sunglasses for example), at the same exposing more of its innate beauty. Yet he also sometimes approaches it as a compressed unit of energy or currency as a series of a singular forms - like the batteries or a set of ingots. This and the widespread use of mobile cases for his work remind me a lot of 1970s Duchampian re-consideration of the object as a reproducible, transportable unit of value.

We’re also drawn to admire the variety of different colours and textures that occur naturally in nature. I like how in Shit Creek he’s applied this to all the stones of a particular riverbed -24 dramatically different stones from the Puketui River. They are carved as a series of paint tubes. Like many of his works they are activated in your head by teasing you to want to give objects that are usually handheld a squeeze. Works like this that are sourced from one particular place have the additional charge of connection to actual place.

The other key thread through Sheehan’s work has been material’s connection to technology. We’re reminded that the key use and worth of stone historically has been as a tool.

One of my favourite works is the most recent, The Quick and the Dead. It’s a museum display case of items that resemble both broken parts of television remote controls and ancient tool heads. The play with the detail around buttons, and between sleek and broken lines is exquisite. Wear is made around certain buttons, or the controls are broken at one end -as if these remotes have had as long, hard, and valued service as the tools of old.

Entitled Song Remains the Same 2 his pounamu cassette tape also comments on how while the technology changes, the materials we have at our disposal and the stories we tell essentially don’t.

Following this work in 2009 Sheehan made a whole carousel’s worth of pounamu slides, each distinctively different. Like the cassette tape and 45 inch record the slide is now antiquated but carries in itself a physical power. IN this case then neatly the slides themselves become the object rather than the carrier of a reproduction. In the exhibition you can admire them on a lightbox, and occasionally they are being presented as a slideshow. A digital slideshow version on constant display however rather undercuts Sheehan’s whole point, and is a little underwhelming.

Wit and the material itself always grounds Sheehan’s work. In Survival Kit, a wooden box contains a water diviner made from Russian neprhite jade, a mini flashlight from Big Bay pounamu, and a plumb with a chain in South Australian black nephrite jade.

Elsewhere Sheehan grounds the stone in the mundane act of making - with his own personal “daily grind” with a difficult material. A recording of time, using the conventions of the CD case and compact disc, Daily Bread is a circular disc of black jade riddled with burred holes, encased in a wooden box with a listing of what the artist did over the process of making the holes. These range from actions (‘turned music up’ (Miles Davis’s Bitches Brew)) to thoughts (‘ thought about sex with the workshop girl’). Sheehan extends the idea of how an object holds time, and stores a history of stories and activity.

Sheehan is playful with stone as part of his daily life - a pop art kind of lightness and inflation - but also respectful of its innate strength. Much like a craftsperson must be of their more valued tools. He weights works with acknowledgement of the materials past, provenance and accumulated cultural worth. The resulting work is both personal and public in resonance. Given their power, calling Sheehan’s objects remote controls seems very apt.