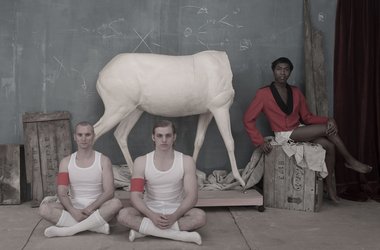 Straka is a wicked minx, a notorious subverter of sacred iconographical cows. Here she is playing around with the imagery of the Southern Man that stereotypical cliché of the rugged, resolutely heterosexual male preferring the solitude of pig hunting in the hills to the sights and sounds of the city, injecting a sinister element. This is something underscored by the bandoliers of bullets and the taxidermy of animal trophies - a sort of faux hunt.

It was in 2000 in Invercargill that the Southland Art Foundation Artist in Residency became The William Hodges Fellowship in recognition of the first recorded ‘European Artist in residence in Southland’ who was part of Cook’s second voyage in 1773 and to commemorate the acquisition of Hodges’ Māori before a Waterfall, 1773 by the Southland Museum & Art Gallery in 1998. The chosen artist lives very comfortably in the old nurses hostel Burwell House and is well supported by Southland Art Foundation (SAF); Southland Museum & Art Gallery (SMAG) and Southern Institute of Technology (SIT). Previous Fellows include Ans Westra, Joanna Margaret Paul, Margaret Dawson, Ross T. Smith, Maryrose Crook, Jane Zusters, Mark Braunias, Regan Gentry, Miranda Parkes, and Peter Peryer.

The first 2012 artist in residence was Heather Straka, and her experiences down south resulted in the exhibition Bloodlust at Southland Art Gallery and Museum. In some ways Bloodlust is a masculine counterpoint to the fetishised ultra-feminine Asian girls of Do Not Resuscitate  which showed at the Jonathan Smart Gallery, Christchurch in 2010. The theatrical tableaux are carefully composed to imply ambiguous narratives and allusions out of Southland gothic - a lineage ripe with riches: Minnie Dean, and so forth. It lends itself to the kind of dark atmosphere Straka favours in her oeuvre, even if only imagined rather than fact. The new Invercargill, helmed by the irrepressible Mayor Tim Shadbolt, is rather a jolly place with a strong sense of community and a genuine interest in the artists who take up the residency.

Some of the artist’s models were from the local Stags rugby First XV (punningly referenced in a pair of mounted goat’s horns). In their innocent whites with their red arm bands and their generally Aryan appearance, one can’t help but make comparisons with the dark glamour of the Nazis - one can almost hear the faint strains of “Tomorrow Belongs to Me” from Cabaret. Straka is a wicked minx, a notorious subverter of sacred iconographical cows. Here she is playing around with the imagery of the Southern Man that stereotypical cliché of the rugged, resolutely heterosexual male preferring the solitude of pig hunting in the hills to the sights and sounds of the city, injecting a sinister element. This is something underscored by the bandoliers of bullets (a kind of adornment in this context) and the taxidermy of animal trophies - a sort of faux hunt… and of course the boys are as much trophies as the stuffed animals. Who is really the hunter and who the hunted?

The background is a blackboard scrawled with the molecular diagrams for testosterone floating above the models’ heads like stray thoughts, but this scientific element suggests something put on display like a dead thing in a museum, their postures reminiscent of sporting team photos of yore. This atmosphere of, if not death then not-life, is reinforced somewhat by a unifying palette of charcoal and pale grey and reds in various shades of dried or drying blood. As with much of Straka’s work, the viewer is voyeur but struck by the confrontational gazes of the subjects. The appearance of dark red, almost black drapes suggest a cheeky shot at the velvet tropes of Academic painting. A lot is going on in what at first glance seem such straightforward images.

In stark contrast to all of this palpable Caucasian masculinity is a dark and somewhat effete character in a red, vaguely military jacket (the hunter? the hunted? typical Straka homoerotic shenanigans), who in one photograph is sprawled on a bearskin rug - a deliberate ironic cliché. Just as the artist is well known for her androgynous style, so too this enigmatic figure - though more in the vein of The Crying Game: the exotic and slightly dangerous “other” in the otherwise stalwart certainties of hunting, rugby and beer. There are no rules. Everything is permitted.

No reading is fixed and no status of the actors is absolute. There is no doubt that it is the artist directing the action, coaxing out the sweet innocence beneath the toughness and the steel within the silk. Straka is definitely the hunter, but are we the viewers hunters too, or the hunted?