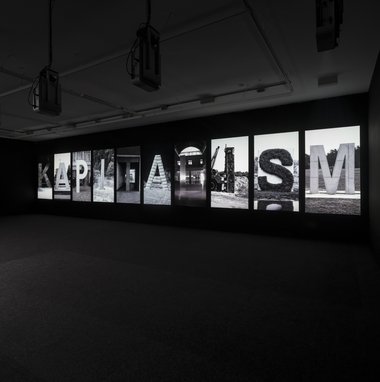 The most alarming digital footage was made in this country, in the Waikato last year where the middle letter A was made from tapered shelves stacked with containers of milk. With fusillades of bullets causing them to tumble down spurting, they are deeply disturbing due to their chilling resemblance to human bodies.

Santiago Sierra is one of those unusual artists who even within the artworld - the normally united international community of passionate promoters of (and believers in) contemporary art - his presence makes some people nervous, if not angry. Like the Polish artist Artur Zmijewski who exhibited at Te Tuhi in October 2008 and who puts people in emotionally stressful, highly volatile situations so he can film them, Sierra walks along the edge of what is often perceived as morally unacceptable. He has made works where he exploits people’s desperate need for money in order he claims to expose the basic structural mechanisms of capitalism.

This new work, the first ‘official’ Sierra exhibition in this country is less polarising - less extreme. (Here is the first ‘unofficial’ one, made after his One Day Sculpture proposal of 2009 was rejected.) Organised for the Auckland Arts Festival, Destroyed Word addresses capitalism specifically by name, using the German spelling popularised by philosophers like Karl Marx - with a K. Sierra not so much demolishes capitalism as destroys its signifiers in the form of its ten letters, so that the work has two meanings: a critique of the greed-driven ethos of the capitalist economic system itself, or a rueful (even gleeful) comment on the current global collapsing of the late capitalist system as a worldwide historical event.

There’s plenty of seating for it takes about thirty minutes for these letters to be transformed from vertical forms to horizontal detritus. Some are ground down, chopped or sawn into rubble; others are consumed by fire or pigs or pierced by bullets. Commercially commodifiable products - like timber, aluminium, silage, concrete, or brush fencing - economically essential for each local region have been incorporated into each letter-shape, their filmed destruction occurring in ten separate countries (Australia, France, Austria, Papua New Guinea, Germany, New Zealand, Iceland, India, Holland, Sweden).

The sawing and hammering ones are interesting because of the communities that come to watch. The most alarming digital footage (all b/w and reminiscent of sixties performance docos) was made in this country, in the Waikato last year where the middle letter A was made from tapered shelves stacked with containers of milk. With fusillades of bullets causing them to tumble down spurting, they are deeply disturbing due to their chilling resemblance to human bodies.

These looped filmed performances sufficiently vary in illumination to ensure the juxtapositions give each activity maximum clarity in terms of front or silhouetted back lighting. Plus there is the synchronised soundtrack accompanying each (occasionally edited) image, usually featuring the noise of men chopping or pounding, or of drilling machinery. It’s a constantly changing frieze of butted together demolitions, the edges of each vertical rectangle usually contrasting and not merging.

Curiously there is a knowing cunning about Sierra’s title, referencing the code but not the coded. Unsurprisingly capitalism’s health is not diminished one iota, though we can fantasise that in time this show might eventually sympathetically encourage that possibility, especially when the symbolic marketable products here rendering the ten letters change form or are devoured by livestock or conflagration. Seemingly like an ouroboros - a snake eating its tail - we in fact have capitalism (of which Arts Festivals are a part) merely presenting its name in self-destruct: disintegrating ciphers, dissolving semaphores, a futile erasure of boldly elucidated and sculpted graphemes.

It is interesting how it takes so long for the mainstream media to discover a calculatedly provocative artist (and become ...

It is interesting how it takes so long for the mainstream media to discover a calculatedly provocative artist (and become indignant), when the artworld has been examining and discussing their practice for years.
http://www.bbc.com/news/world-europe-42178470
http://eyecontactartforum.blogspot.co.nz/2008/10/lets-use-people-for-guinea-pigs-push.html