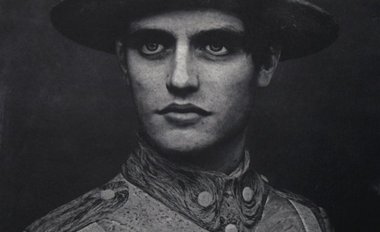 The effect is intensely powerful and richly atmospheric. Despite their pastiche and fictionality, the images hint at an interior life, even if the eyes all too often seem dead and mineral. But then again, the allusion to the nullity of photographic death and preservation seems a logical one for a war memorial to the dead. The relative blandness of the expressions allows the viewer to project their own readings onto each character.

Next year July 28 marks the centennial anniversary of the First World War, a conflict that in many ways marks the emergence of New Zealand onto the world stage as a modern nation, tainted with the loss of 1.64 percent of New Zealand’s population. Every school, society and club of the time had its misericord. Every town in Aotearoa, no matter how small, has its own war memorial, and it is these that provide the source material for Paul McLachlan’s suite of photographic prints Home Ground at Chambers 241 gallery.

McLachlan is a New Zealand printmaker with a BFA (hons) from Massey, Wellington (2008), and an MFA with distinction from the University of Canterbury School of Fine Arts (2010-2011). In 2010 he received a Select award from the University of Canterbury and his work placed in the Canterbury’s collection. In 2013, McLachlan received the Susan Ethel Jones Fine Arts Travelling Scholarship to take up an artist residency at the Large Format Printmaking Studio in Venice.

The thick-edged black and white photo-intaglio prints record the faces of the ten South Island marble statues of the thirty-eight soldiers standing to attention, carved in Carrara, Italy and erected around New Zealand to commemorate the Great War. Some of the statues were given their likeness from photographs of particular New Zealand soldiers, thus closing the circle with these works. Using digital sculpting software McLachlan has digitally remodelled and humanised into pseudo/hyper-realistic versions - a Pygmalion metamorphosis accomplished digitally. Like some forensic process, the sculpture beneath is layered with skin and hair textures, and even a suggestion of the lichen encrusting the originals and pitted marble, giving them the aura of life or even something more idealised and larger than life - simultaneously an inversion and mannerist intensification of the Baudrillardian simulacrum.

On the other hand it is ultimately a deception: something that always was frozen, a still life, is given the illusion of having been frozen by the photographic moment. There is, perhaps, a Freudian homage to and erasure of an art-historical forebear with covering over the impassive gaze into the distance, a tradition in warrior portraiture that can be traced back to Lysippos’ sculptures of Alexander the Great. Perhaps we may interpolate a similar function as Walter Benjamin’s “Angel of History”:

“His face is turned towards the past. Where we see the appearance of a chain of events, he sees one single catastrophe, which unceasingly piles rubble on top of rubble and hurls it before his feet. He would like to pause for a moment so fair, to awaken the dead and to piece together what has been smashed. But a storm is blowing from Paradise, it has caught itself up in his wings and is so strong that the Angel can no longer close them. The storm drives him irresistibly into the future, to which his back is turned, while the rubble-heap before him grows sky-high. That which we call progress, is this storm.” (Benjamin, On the Concept of History IX, trans. Dennis Redmond 2005)

Comparisons can be made with the composite photographs created by Ludwig Wittgenstein to illustrate his theory of rhizomatic “family resemblances” and eugenicist Francis Galton’s composite photographs meant to test his phrenological and physiognomic theories. Anonymous templates are transformed into human individuals that can be identified and empathised with, and further serve to bring to life and immediacy a part of our national history most of us only think about once a year on ANZAC Day.

The effect is intensely powerful and richly atmospheric. Despite their pastiche and fictionality, the images hint at an interior life, even if the eyes all too often seem dead and mineral. But then again, the allusion to the nullity of photographic death and preservation seems a logical one for a war memorial to the dead. The relative blandness of the expressions allows the viewer to project their own readings onto each character. It becomes, in effect, a kind of prosopopeia - a voice that addresses us from beyond the grave. It is a unique synthesis and really quite an extraordinary achievement. McLachlan’s attention to detail and his printmaker’s skill are everywhere evident. This is an astonishing tour de force.

Not sure about eroticism, but I suppose that's implicit anywhere idealised youth is involved. It does occur to me that ...

What about eroticism? There is something subtly bubbling away in these images. Or is it my imagination - am I ...

It sounds like an interesting project and process, however I get, at best, from the internet images, the stagey surrealism of Rene Magritte's mock stone figures, at worst the obviously digitised images of Weta Workshop or those museum mannequins that made me loose sleep as a child.

But the real problem for me is the one I have with any war memorial, which is the hubristic sentimentality which pervades any given artefact given this particular function in times of peace; and its unpleasant corollary of being a jingoistic poster in times of war.

I personally find the lists of names on war memorials most affecting, especially local ones where the family names are commonly sprinkled through the rolls. I can then imagine the families and long lists of children and grand children that did not appear thanks to foreign policy.

As for the Great War marking New Zealand's emergence onto the world stage, these soldiers, like many a young actor they died on that stage to the applause of the aged and impotent playwrights, not really understanding the script.

What about eroticism? There is something subtly bubbling away in these images. Or is it my imagination - am I confusing this quality with the lugubrious or maudlin?

Not sure about eroticism, but I suppose that's implicit anywhere idealised youth is involved.

It does occur to me that a parallel could be made with Tony Ousler's use of real world object and projection.