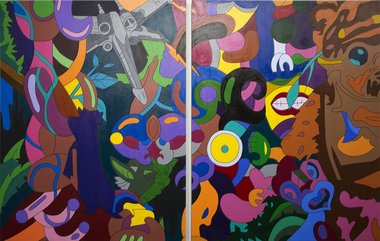 What Elliott is confronting, what she has in fact done for several years in her more figurative urban images, is explore the clash of cultures, Māori/Pakeha, old and modern, local and global. Ironically the question raised about cultural identity is the very one Elliott is confronting. The difference is, unlike the questioner who raised doubts at the floor talk, is that the artist recognizes identity not as something immortal or forever established.

For those who fail to see identity as a historical construction, whether it operates at a racial, tribal, personal or national level, there’s always going to be issues, arguments, contests and war. The essentialists, it seems, are still with us, their presence demonstrated quite forcefully in an incident linked to a recent exhibition at the Calder and Lawson Gallery, Waikato University. The exhibition, curated by Steph Chalmers, which prompted a debate about identity, currently running at the Academy of Performing Arts, is called Glokool. It features the work of Māori artist, Zena Elliott. Elliott is a Wintec graduate from the School of Media Arts (2006) and of Ngati Awa Te Whanau-Apanui descent. So given the heritage, one would have thought that Elliott might have a natural immunity to any criticism.

But no. At the floor talk, the artist was challenged by Māori from the University itself about the appropriateness of her use of Māori motifs in her modernist work. Who did she identify with? Was she a Māori artist? These questions were put to Zena Elliott with a certain amount of assertive concern.

This sounded like an old and obsolete question. In the late nineties, Dick Frizzell got into a bit of trouble here in Hamilton and was asked to remove his work from the Museum. His unconventional use of manaia and hei tiki figures was seen as a little too unorthodox. The mixing of traditional and modern art forms was a bridge too far for those in this town, though most here seemed to miss the import of what Frizzell was actually trying to say. However after the brouhaha had died down, everybody it seemed grew up and got over themselves.

So it was as a bit of a surprise to hear the old line being trotted out again which came with certain assumptions about the fixed, eternal and changeless nature of cultural identity, behind which lurked notions of purity and all the other stuff that goes with fear of change - the belief in a timeless, immutable and universal core at the heart of things.

What was it about Elliott’s work that so disturbed our visitor?

The works on show, the earlier 2012 pieces, are big, bold, neon colourful with an unmistakable pop culture feel to them. Stylistically there are elements of Joan Miro, Patrick Caulfield, Peter Phillips, James Rosenquist together with a hint of Walt Disney. The compositions are a riot of collaged images that bump, jostle, weave and overlap with each other, and when looked at closely, figures that are recognizably Māori are there among the melee - manaia forms, the three fingered hand, ubiquitous shapes that belong to the Māori oeuvre. These silhouettes are painted in an array of high toned flat hues that use a virtual carousel of colours on shapes that have both abstract and figurative configurations. Intermingled with these elements are references to popular culture like the speeding spaceship from Star Wars found in the diptych, Familiar Spaces, 2012.

What Elliott is confronting, what she has in fact done for several years in her more figurative urban images, is explore the clash of cultures, Māori/Pakeha, old and modern, local and global. Ironically the question raised about cultural identity is the very one Elliott is confronting. The difference is, unlike the questioner who raised doubts at the floor talk, is that the artist recognizes identity not as something immortal or forever established. The postmodern world has brought us the global village and a plural economy where cross cultural fertilization is not only inevitable but also, one could argue, perhaps beneficial. Some fear dilution, debasement, desacralisation, the loss of tradition. This has caused conflict, retrenchment and a withdrawal into a fundamentalist mind-set in some quarters.

Elliott acknowledges the problematic nature of some of this in the cutesy sculptural form on exhibit; a sort of hybrid ethnic doll made of vinyl and called Master Z. Every culture, Elliott implies, is now open to influence via the high powered visual and electronic media, whether it’s television, movies, computer games or the graphic novel. The artist acknowledges this while presenting a visual feast where borders come unstuck and things meld and flow and weave in and out of each other. Identity is a fabrication made up over time and the present time is a point in history that sees that process accelerated. Elliott visually represents that maelstrom, pointing to a polymorphous process of evolution which all must eventually come to terms with.

The artist herself is at the stage of trying things out stylistically, her newest move involving a visit to the school of Frank Stella, taking the stripe and marrying it up with kōwhaiwhai patterns, playing again with strident colour, the whole ensemble taking on a more structured format. The work called Ihi exemplifies this while introducing various abstract notations within or along the stripe.

Āmio, 2013, takes abstraction even further with a riot of geometric forms layered across the top of what might be a blow-up version of Ihi. Lolly-pop candy colours are the order of the day - “road worker orange and popsicle lemon” as described by Joe Citizen, Wintec lecturer in the School of Media Arts. “Midnight purple and dairy farm green.” More is more.

Stella had no transcendental aspirations and neither does Elliott. In these latest works she seems to be simply enjoying the aesthetic of geometry and playing with forms that only very loosely reference Māori motifs. There’s a touch of late Kandinsky floating about, bits of Ernst Wilhelm Nay, a dash of Darryn George. It has the look of Vorticism on steroids, a world of erstwhile art forms in hybrid collision, identities blending at a purely aesthetic level; another reminder that we are unequivocally contingent and historical creatures.