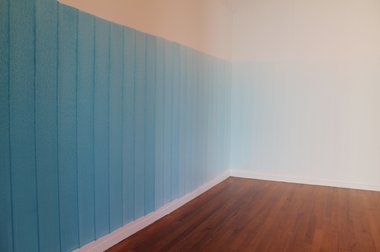 The smaller works on display, painted on conventional canvases are quite beautiful constructions where the move changes from light to dark. It's as if the larger blue work is a demonstration exercise while the other more domestic sizes take on a different aesthetic appeal. Yet the whole idea of taking the artist out of the equation and replacing them with randomness or mathematical control has intriguing implications.

Looking at Simon Morris‘s paintings the other day at Ramp Gallery, Waikato Wintec, reminded me of a challenge recently set up by the British magician who calls himself “Dynamo”. The trick for the magician was to find an object hidden somewhere in the city of London by following random instructions delivered over the telephone by radio listeners calling into the show. Turn left, now turn right. Inexplicably the illusionist found the object within what seemed a very short space of time. Spooky or what?

Morris does something of the same in his art practice, using a distanced control factor each time to create his works. His early abstract pieces, a sort of variation on the Gordon Walters theme, used chance (the roll of a dice) to formulate where each black line might be placed.

His latest work, Blue Water Colour, still employs a control mechanism, but this time it’s a mathematically precise calculated formula that acts as the discipline having to do with paint dilution in relation to the size of space given to work with, usually a gallery wall. The result is a further reworking of the abstract genre in the minimalist mode. What we end up with, in this instance, are lines of vertical paint strokes, a house paint brushstroke in width, butted up in a series together and played out in ever increasing carefully controlled dilutions of paint. Just add water - but just the right amount each time.

Is it the process or is it the final product?

The final product painted straight onto the gallery wall, using fifty nine individual brushstrokes, is interesting enough if you’re into the esoteric world of the tincture trail of horse hair on a flat surface. Of course the American Abstract Expressionists in the fifties were. The stroke was magical, invested with almost spooky metaphysical presence. Our artist has no truck with this. Those days are long gone. Morris is more your cool process man, picking up from stuff a decade or two after Pollock, where the making became the central focus, often involving Dada-like chance.

Morris makes minimalist pieces which possess a repetitive structure that reminds one of Dan Flavin and his Fluorescent Light Installation from the mid-seventies. Blue Water Colour, with its subtle gradations of pigment and light is a technical virtuosity as well as a visual feast, albeit for the purist, while also containing something, strangely enough, straight out of a paint manual, an instructive exercise in colour manipulation; painting by numbers.

Is all of this just arid wall chart stuff? The smaller works on display, painted on conventional canvases are quite beautiful constructions where the move changes from light to dark. It’s as if the larger blue work is a demonstration exercise while the other more domestic sizes take on a different aesthetic appeal. Yet the whole idea of taking the artist out of the equation and replacing them with randomness or mathematical control has intriguing implications. The opposite poles which Morris has used over the years, plays with the notion of chaos and order, reflecting the two different levels of reality found in the macro and micro worlds where ‘order’ seems to dissipate the further one moves down toward the subatomic quantum level. At this point we are dealing with a conceptual field.

However the artist’s foremost approach is certainly that of art for process sake where all human expression is removed from the equation. Morris’s role is simply to set the rules of the process and allow the self-evident properties of the material do their work. Clement Greenberg would be applauding. Up close, the effect of the large wall-painted Blue work is like looking at some plain Pointillist detail. Further back the bands of brushstroke and their tonal depreciation take on an elegant structure.. There thus emerges a nice tension between the froth of paint and the precision of form.

Helen Frankenthaler has used diluted paint before but Morris has taken this a step further. Yet it still adheres to something Frank Stella once said about the style. “What you see is what you see”. There are no transcendental or utopian longings to be found in this oeuvre. All ye who enter here must despair if you are in the yearning mode. However this self-sufficient art has, as Morris creates it, a certain Op Art effect with its geometric patterns creating certain visual vibrations as the chromatic shifts play with the eye. Optical qualities in a reductionist mode thus trump any existential experience.

Perhaps it was this that caused art critic, Kim Levin in his article Farewell to Modernism (Arts Magazine, 1979) to complain when speaking of Post-Painterly Abstraction, that people “were finally bored with all that purity”.

Obviously that judgement was a little premature. Why has the style persisted? One suggestion is that the reductionist mode was born in the turbulent sixties as a response to chaos and represents a search for simplicity in times of stress, the end point of Cezanne’s formalism, partaking of the quietness of a John Cage deliberate absence of sound, folding back into some Zen Buddhist stillness. It has to be remembered that Cage too incorporated elements of chance into his controlled music creations, like Simon Morris did in his earlier works.

Ironically looking at Blue Water Colour however, one is not thinking about the process so much but rather the thing in itself and its contemplative value, something like starring at an image of the Redshift that introduces the viewer to the enormities of space. Oddly enough, or not, radical theological thinking in the twentieth century tracked toward a minimalist posture at exactly the same time the artists were engaging with it in the nineteen sixties, during a time when poet Bob Dylan was reminding us all about A Hard Rains A-Gonna Fall.

It hasn’t gone away. Enough to keep the Minimalists in business.