It’s A Taped Up, Weighed Down, Frog Infested World 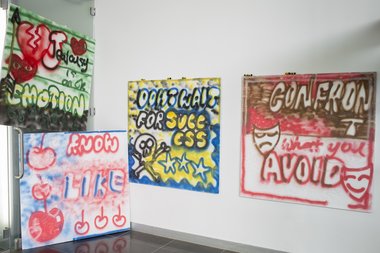 On the other side - by the lift - is a suite of four text painting panels, with colourful slogans casually sprayed on or carved in. They state - at times - unsettling sentiments such as 'Know What You Like', 'Don't Wait For Success', ‘Jealousy Is An OK Emotion' and ‘Confront What you Avoid', captions mixed with images of skull and crossbones, cherries, torn hearts and repertory masks.

This onsite show (like the online Dryburgh one) features two unrelated artists with the same surname, here presenting a collective - conceptual and visual - Webby ‘brand’. The main trope seems to be the Window gallery as a peer-into glass tank, in which is another much smaller waterfilled tank in which tadpoles are metamorphosing into small Green and Golden Bell frogs. Their transformation, in the library-foyer gallery context, may be a symbol for students having a university education, getting a qualification and transmuting into salary-earners. They could also be humans over-populating the planet.

In the glass-fronted gallery, with the frog-tank (it has rocks taped to a floating basketball that the froglets can clamber on to, up out of the water - the ball being ‘The World’, perhaps a sinking ‘varsity’ and a pun on Jeff Koons’ famous work, Equilibrium) are some of usual trappings of a bourgeois lifestyle: collapsible couch and bed, collapsible table - their ‘collapsibility’ being a warning in itself. With them is a Raquel Welch poster, image pressed against the end glass wall with its back exposed, plus a bale of wool and a draped-over fleece (‘fleece’ being another warning perhaps about the university qualification/job ethos).

In the foyer area, in front of the gallery, the installation continues. On one side of the blue-glass ‘window’ - by the outer wall - is a Gladwrap dispenser, a tear-off roll on a stand: an invitation to participate in the production of this raw and deliberately wildly scruffy work. And some indeed have - making interpretation of the results difficult.

Many overlapping wrinkled strips adhere to the glass frontage, holding in place curly skeins of wool, the occasional coin, a broken off twig and some spaced apart, delicately coloured transparent leaves. They obstruct visual access to the inner gallery space, being a sort of installational cataract that blurs perception of its contents. Through its stickiness the squishy plastic showcases certain symbolic materials in isolation on the glass, but by being wrinkled and shiny it impedes overall comprehension as well.

On the other side - by the lift - is a suite of four textual panels, with colourful slogans casually sprayed on or carved in. They state - at times - unsettling sentiments such as ‘Know What You Like’, ‘Don’t Wait For Success’, ‘Jealousy Is An OK Emotion’ and ‘Confront What you Avoid’, captions mixed with images of skull and crossbones, cherries, torn hearts and repertory masks.

On the steps of the university library, these garish admonitions and exhortations - in coordination with the visibly changing tadpoles and other symbolic props - disrupt the dominant mindset of setting up a career path by acquiring successive qualifications, but in an oscillatory manner. They provide a hesitant, wavering counter-commentary, undermining university marketing and a focussed lifestyle, but half embracing it too.