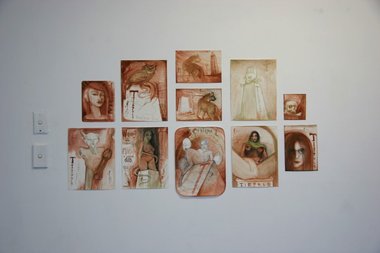 Three quite distinctive artists - with Ltd, a clipped title - here form a small company (ie.group), presenting the limits of solo personality versus the constraints of collective community. The occasional reference to theories and processes of capitalism, communism and socialism pops up in this display of drawings, installation and (sometimes relational) sculpture, fourteen listed works presented altogether.

Ralph Paine‘s skilled and ornately fluid chalk drawings - with pastel, watercolour and gouache - show his preoccupation with trope, looking at elements of art (and social) history to generate multiple interpretations, and are similar to images he had in a show at Ramp in Hamilton a few years ago.

Entertaining but serious Paine’s conceptually layered images seem deceptively effortless and casual in the manner they are pinned up on the wall. Highly contemplative and visually beguiling, they work well in large numbers.

Daniel Webby‘s sculptures are more opaque in their intention, and less retinally alluring. His works are ‘raw’ in the sense that they emphasise the rough unpainted surfaces of the materials used and focus on creative thinkers like Buckminster Fuller (there is bamboo geodesic dome that contains a lecture space for social interaction) and Jean Luc Godard.

Godard’s 2010 film Socialism features the luxury liner Costa Concordia that later got wrecked off the coast of Italy. This ship provides the name for one of Webby’s sculptures, a precariously propped up ‘screen’ made of thick plaster and clay. One side is of curved and bulbous wave shapes that look like combed ice cream or crunchy meringue. Its back has embedded in its surface assorted pieces of a jigsaw, some connected and ‘legible’, of what looks like Mt. Fuji.

There is an implication here that just as one day Mt. Fuji, a volcano, will re-erupt, so will the extravagant lifestyle that luxury liners like the Costa Concordia and Titanic represent inevitably collapse. In other words, another bloody communist revolution is a palpable reality - not a fanciful pipe dream.

Ben Clement‘s projects, like Paine’s, are mostly wall-based. Two works of plugged in 32” and 42” Sony HDTV LCD units have there their front translucent glass screens removed. This exposes the inside of their back trays, revealing the normally hidden lines of thin glowing parallel tubes. This makes them look like electrical insect zappers; the analogy between flying bugs and human television addicts seemingly deliberate.

Two other works by Clement look at marketing ploys used to gain sales as part of capitalist consumerism, offering digital images on tissue that is stuck to the wall. Say It with Flowers / Water sells at $700 - $1200 (with a complimentary Flower ring) or $2000 - $3000 (with complimentary D-F colour, VS clarity diamond) with the original jewelry poster on display in the Snakepit streetfront window, while Resolutionary goes at $1000 (with a complimentary 16g 3rd Gen Ipad). One assumes Clement is serious and would honour these unusual offers, if interested buyers - intrigued by his images and unorthodox sales ideas - approached him.

Daniel Webby also has some unusual costing structures, pitching his prices to interplanetary travellers. His sculptures are selling at $180 per kg, but the rate varies according to the work’s destination and its local level of gravity (its multiple of the Earth’s). Therefore for Mars the Earth rate is multiplied by 0.39, for Uranus 0.917, for Jupiter 2.640 and for the Sun 27.00. He is obviously satirising global capitalism (and maybe the layered subscription rates some art magazines have) but taking it well beyond our planet.

Thanks John – unsure if the pricing structure is a critique or an acknowledgement of complicity of another kind. In ...

Thanks John – unsure if the pricing structure is a critique or an acknowledgement of complicity of another kind. In truth I haven't yet considered what trade strategy I would employ with extra terrestrial visitors – I suspect they may have things more useful than hard currency. The specific pricing structure for interested earth residents is $180 p/kg adjusted by the multipliers noted in your review in the following categories: < 1kg: Sun, > 1kg and < 5kg: Jupiter, > 5kg and < 30kg: Uranus, > 30kg: Mars. There were works which fell into each of these categories – as Gwyn Porter once wrote, gravity is not a problem.