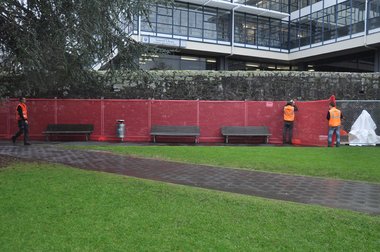 Using the resources of Auckland City Council, Bob van der Wal has placed netting fencing covered with red gauze along the front side of the wall, obscuring it so it is partially hidden from the library entrance. Suddenly an important remnant of local Auckland history is put out of sight. A colonial relic that helps us understand the current issues of our time is obscured.

In this subtle show the politics of architectural space are explored by Bob van der Wal and Ben Clement, taking the Window gallery project out beyond the library foyer into the social environs of the university grounds. The project alludes to various commercial, cultural and historical assumptions that accompany certain zones designed for specific functions within the university. The two main areas focused on (there are several) are firstly the Window gallery frontage and the space between it and the library building‘s glass doors; and secondly, the historic military wall outside in the courtyard.

When considered, the Albert Barracks wall, a defensive stone fortification with a line of rifle embrasures, has some surprising points of correlation with aspects of the library building, particularly the blue square configurations on the outer glass doors and lift wells. These patterns help people see the glass and not walk into it. They look vaguely like crenellated musket holes, implying the institution is in a state of siege - an ‘ivory tower’ needing defense.

Using the resources of Auckland City Council, Bob van der Wal has placed netting fencing covered with red gauze along the front side of the wall, obscuring it so it is partially hidden from the library entrance. Suddenly an important remnant of local Auckland history is put out of sight. A colonial relic that helps us understand the current issues of our time is obscured. (Or is it instead highlighted, with the red standing for say, the blood of colonial conflict?)

As well, inside the library foyer, the glass front of the Window gallery has been covered with reflective film by Ben Clement so you cannot look through; you only see yourself and other people around you - in the space. This does two things. Like the fence hiding ‘history’ this hides ‘culture’ and ‘the arts’ - for the gallery becomes a blank wall. Its reflectivity also reminds us of the power of the social, particularly in spreading ideas about art. As the show’s title says ‘be seen, be effective.’

Yet this caption could be ironic. The reason is because of two other components to this complex exhibition from Clement that build on this discussion of visibility. One is in the foyer by the door, a double pillar ‘gateway’ - black obelisks with twin screens - that visitors to the gallery have to pass between. On the two screens is a series of brands promoting shops found in Canterbury Arcade downtown, products that possibly enhance a person’ appearance and/or popularity. Advertising is never normally seen in university libraries so in this foyer it is unusual. Also presented are digital images of plants growing on the rock wall, covering it over - and digital rectangles of silver film that reference those over the gallery glass.

The other component is a large digital print displayed above an entrance way to the Student Association building on the other side of Alfred Street. The symbolic image is of a ramp apparently ascending through the portals of higher learning. At the front, hovering in two lines over the start, are ten blue warning squares, maybe a reference to the ‘rewards’ of anticipated prosperity and the accompanying consumerism. The walls however are free from advertising.

Overall the coding here seems to condemning three things. To speculate about the artists’ intentions, they seem to be critiquing: (a.) ignorance of the past that prevents us from comprehending social conflicts within the present; (b.) any rejection of culture which provides a stimulus for intellectual debate about the present; and (c.) the pursuit of prosperity in the future as a sole motivation for acquiring knowledge.

I wonder though whether many students who are not friends of the artists will even notice these interventions. They probably think the rock wall is being repaired by gardeners, that commercial interests have rented the space in the foyer at the base of the staircase, and that nutty art school nihilists have erected the peculiar ‘abstract’ image outside the Student Association building. As for Window gallery, the mirroring reflections might raise a few puzzled eyebrows, but they won’t be sure if the shiny wall has always been there or if it is new. An uncertain enigma.