Humans Will Conceptualise the Future of Their Own Demise 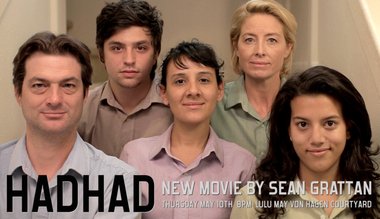 Despite the glowing skin and clear eyes of its photogenic cast - three women and two men - all blandly dressed in beige pants and tinted shirts, the prevalent mood of this deliciously complex film is sinister in the manner of David Lynch or The X-Files, using foreboding music, ominous portents and shadowy scenery in the woods.

Turnstile Heaped on Pour Down

Currently being presented in the two large galleries of St. Paul St are a pair of overseas works organized by exGovett-Brewster curator Melanie Oliver: one from Sydney, the other from Los Angeles.

In the bigger space of Gallery One, Justene Williams’ presents Turnstile Heaped on Pour Down, ten works of clusters of television monitors, small laptops, plasma screens and wall projections spread around the two long rooms. Some are in groups on the wall or floor, others are stacked up on wooden pallets: all depicting frenetic Dadaish activities with the artist performing rudimentary tasks (such as tapdancing, keyboard actions, exercising on a treadmill) in outlandish costumes that merge like camouflage with the relentlessly patterned background. These have been treated, collaged and edited in post-filming production, sometimes doubling, tripling or quadrupling the gyrating or bouncing performer as a result.

These activities are absurdist performance mixed with a suggestion of background holistic ornamental painting, while the textured screen qualities, masks, outfits, props and backgrounds vary - but only slightly. There are about forty moving images to study in total, Williams superficially seeming like a demented hybrid of Hugo Ball and Paul McCarthy, but without their edginess and inventiveness, or the charisma of say John Bock. The rhythms and agitated movements don’t vary much. Lots of shaking, waving and jumping by Tweedledum and Tweedledee that ends up repetitive and shallow - literally and philosophically: a celebration of surface and maximum filling of the screen.

From the ridiculous to the sublime. Ex-Elam film-maker Sean Grattan has been studying at Cal Arts since 2009, and has developed his already considerable talent enormously since he showed his films at Newcall. Caterina Riva included him last November in her Sudden Gestures or Noises, but his amazing film Carmen San Diego was upstaged by the even more amazing work Death Mask III by Ed Atkins.

Now Grattan has made HADHAD, a much longer film, 41 minutes plus 10 minutes of sporadic pre-film text that later intermittently surfaces as the lyrics of a set of strangely haunting songs he has written for the soundtrack. The scripts he has devised for his cast of six are very carefully crafted philosophic musings. These serve as interconnected conversations spoken in a deliberately flat, oddly chirpy enunciation (with no emotional investment) that is intentionally comic. Topics elucidated by the cerebrally abstract and articulate April and Tommy - or the more sensually inclined Peter and June - include the contrast between enjoyment and nourishment in food, the disappearance of time and memory, the ethics of violence as means to success, the mapping of signs and metaphors so that things fulfill their function, and the political consequences of the structures of traditional storytelling. These discussions occur in interconnected snippets, over the preparation of vegetables, the chopping of wood, a card game with symbolic motifs and before the collective humming of a mantra.

Despite the glowing skin and clear eyes of its photogenic cast - three women and two men - all blandly dressed in beige pants and tinted shirts, the prevalent mood of this deliciously complex film is sinister in the manner of David Lynch or The X-Files, using foreboding music, ominous portents and shadowy scenery in the woods. Visually and aurally you are quickly hooked, and it gets better and better as you start to consider the dialogue and its connection with HADHAD, the mysteriously silent, long nosed creature from the future.

Within St Paul St. there is no overarching title for these works, so it seems the two presentations are quite separate, especially as Oliver has not written an essay that argues in any way for their juxtaposition, something I find puzzling. As I don’t consider the Williams show to be very satisfying, I personally think some other brilliant Grattan films should have gone in Gallery One to make a mini-survey. A wasted opportunity.

This great interview with LA based film-maker Sean Grattan is to be found on Circuit. https://www.circuit.org.nz

This great interview with LA based film-maker Sean Grattan is to be found on Circuit. https://www.circuit.org.nz