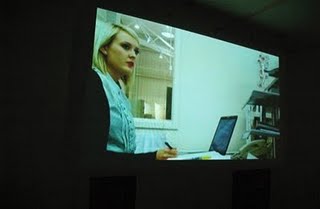 What is striking about Grattan is his confidence with a ‘European' sensibility. His interests are unusual for a New Zealand director. It will be interesting to see if that changes in California, how he intellectually grows.

Looking at you with contempt
A film by Sean Grattan

Sean Grattan is a young (well he’s 28; not so old either) film-maker, trained at Elam, and about to start a course at Cal Arts - for which he has won a scholarship.

The daily screenings at Newcall (at 12, 2, & 4) of this his most recent project reveal him to be a talented director with a thorough knowledge of the history of the medium and its different genres. Whilst his previous endeavour Work And Not Work was narrative-based with an interest in an Antonioni-influenced urban landscape, Looking At You With Contempt of course alludes to Godard’s Contempt (1963), and has a lot of Akerman and Lynch thrown in. And its construction seems to have come from a process of juxtaposing different genres together and seeing what sort of narrative could emerge. In other words, the ‘plot’ wasn’t rigidly predetermined at the very beginning.

There is an odd symmetry with this film, for the title references the beginning (its Godardian jump cuts) and the end (its withering look). Between the two it blends film noir, factory documentary, ‘realism’ and an industrial metaphor for the construction of the protagonist-subject, oscillating between the narrative conventions of fiction and non-fiction and using long silences or ambient sound. Grattan knows how to pick good actors and elicit superb performances. The drift of his emerging story is never overstated, yet when a detail is established he is prepared to abruptly twist it around and startle his audience - in this case using unexpected dialogue or sound.

What is striking about Grattan is his confidence with a ‘European’ sensibility. His interests are unusual for a New Zealand director. It will be interesting to see if that changes in California, how he intellectually grows, and the big yawn-inducing question - will he return? He certainly deserves support for his studies and hopefully potential sponsors will recognise that and significantly contribute.