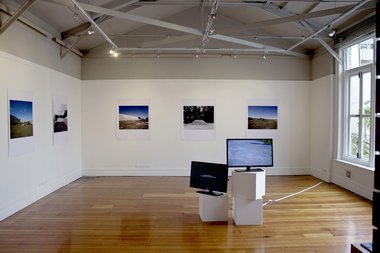 As lovely as that exhibition title is, it does have a faux poetic grandeur there's a rash of in new postgraduate work these days - as if an artist's work might have more weight given the language of a 19th century gravestone. In Smith's case at least there's a strong engagement in poetry at various levels. And, just as there is theatrical presence in absence in a Laurence Aberhart photograph of a memorial or building, there is also in Smith's work in space.

Lead us outside, lead us out quietly

The subjects of Talia Smith’s photographs are - squarely, plainly - the vacant commercial lots that pepper sprawling Auckland city. As documentary however they could be any forlorn industrial-zoned area in what was pasture 50 or more years ago in New Zealand .

These are the gaps between the teeth in commerce’s mouth. As lonely and discarded as they look, they retain a value in an owner’s ledger; as much part of capitalist’s chewing mechanism as the box-like developments and roads that surround them. It is of course a terrible waste: a blight that we have grown to ignore; one of the most visual signs of the unsustainable nature of our economic system.

I write atop my soapbox (more likely these days to be a set of packing crates). Yet what I like about Talia Smith’s project (an exhibition and accompanying book) is that, rather than being polemic she’s interested in opening out the resonances of these spaces to our memories, turning private spaces into a public poetic commons in which to play. This is gently, empowering work, nicely directed by its title: ‘Lead us outside, lead us out quietly’.

As lovely as that title is, it does have a faux poetic grandeur there’s a rash of in new postgraduate work these days - as if an artist’s work might have more weight given the language of a 19th century gravestone. In Smith’s case at least there’s a strong engagement in poetry at various levels. And, just as there is theatrical presence in absence in a Laurence Aberhart photograph of a memorial or building, there is also in Smith’s work in space.

There are easy connections visually to be made to the open, un-peopled space Fiona Amundsen provides in the foreground of her photographs. But here I think right now comparisons end. Amundsen’s projects seem concerned with active, well-developed sites of cultural and commercial activity. Here, never.

The sense of a presence in these images is of the freedom, the open space for expression they provide in the present moment. They avoid what almost amounts now to a new genre of the sublime - passed around virally through social media - globe-trotting collections of lusciously shot grand abandoned buildings. Again such sightseeing Smith avoids.

It’s in the mixed, accumulated soil in the cracks between things where culture grows. When young we seek out the disused spaces to play and experiment in the unsanctioned spaces beyond the ambit and control of our elders. As individuals, companies and communities it’s our temporary residence in spaces in between structures where we develop new shapes and new social connecting tissue.

In her accompanying book Smith has interspersed a diverse set of short written musings from people between the images . She asked them to: “recall a memory of a space/place from your life, which could mean detailing the physical space or a specific memory… it is up for your interpretation.”

It’s a broad brief. The responses are scraps and very variable in quality. Their scrappiness however fits with the aesthetic and operation of memory, and their diversity and wistful ordinariness sits well with the intentions of the project, effectively welcoming our own thoughts as participants in. To crib a scrap from Rob Garrett’s piece, “living-rough locals lounge on sunny steps”.

Smith’s images offer up this play for the eye. Rather than from the street, in the best photographs a fence or line has been jumped. They are taken from within a space, looking out across it. Each presents a stage, open ground that is animated by various piles of materials or props in the far ground. The near ground is often an unkempt layer of gravel or broken down building material, bearing the scuffmarks of recent restless activity.

Here are two examples of the best work. In the first, centre frame of the photograph and large on the brick wall of an adjacent building is a painted locating number ‘16A’ - as if this were an auction lot. Before it is a verdant space of weeds. The weeds have grown to a thickness and thigh-high collective beauty deserving of the title of forest.

The photograph is taken from a high point up the section. From here we can also observe the banks of fully-mature trees and a tall lamppost against the sky beyond. There is the sense of being inside a momentary oasis looking out. To the left is the section’s corrugated iron fence, with gaps you might use to make the jump in. Beyond traffic moves through in contrast to the section’s calm. A sign on a business across the road reads ‘KD Auto Spares’ - that word ‘spares’ also offering a way in. As in all the images, with the clouds crossing the sky and chatter of objects in the distant surround, there’s the sense of time freshening everything.

The second image: the perspective is now from below looking up (the ground we work on isn’t flat, these images remind us). We look up the rising bank of stone, earth and weeds towards the sky, a fenceline, streetlights and far away billboards that indicate the busy road. We’re quietly collected down the bottom of the slope, and smack bang in our view above us is an improbably large boulder. With a gentle push it would be on top of us in no time.

Wisely this exhibition selects just a few strong images. There’s no clear design or conceptual rationale for why some images are black and white others colour in the exhibition, nor for their variation in size and arrangement in the book. This is a young artist finding her way through arrangement, but with a clear, open and inclusive sense of purpose.