Roche in the Ironbank 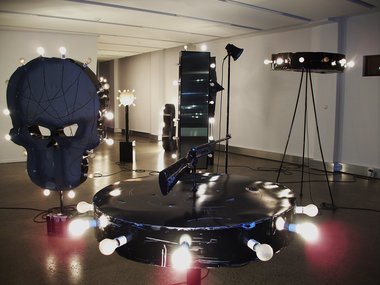 So this assortment of throbbing sculptures: is there a likely interpretation for these dilapidated symbols? They seem to be from a carnival’s junkyard, but despite being knocked around they function perfectly. Maybe they are anti-factory-fresh or pro-ancient signs, signs that celebrate history and aging and wear and tear - instead of slick and impeccable finish. They seem to endorse experience and time, dues well paid, of being flimsy and assailed but still holding up.

When I walked into this installation I thought immediately of A Forest of Signs: Art in the Crisis of Representation, the influential Museum Of Contemporary Art show in Los Angeles in the late eighties, twisting it (within my memory) into ‘signage’ signs, not intricate signifiers embedded in every cultural artefact. Peter Roche has created a fairground of readable, symbolic, narrative-laden shapes, each with its perimeter of winking and moving light-bulbs, a sideshow barker visually hollering “Step right this way!”

These free-standing, flickering sculptures are made from cut and folded steel sheets, as if from giant cornflakes packets. Painted black, you can walk around and see the wiring and control boxes from behind. Some have control knobs so you can speed up or slow down the pulse rate.

There are eleven bulb-studded sculptures, and most have been painted and then bashed around a bit, denting their edges and acquiring frenetic striations, bumps, and gouges from a grinder. The battered and worn, well-travelled look is a crucial aspect, as if props in a travelling circus. Included is a very large skull, a full length mirror, a four-pointed star, a white globe, a flying saucer, a heraldic plaque, an uppercase O, a lowercase t, a fairground air-rifle for shooting at targets, and a reversed ampersand that doubles as a deformed dollar sign. In the background plays a recording of a Josephine Baker tune from Paris in the 1930s. The space is awash with reflections from the dark large plate glass window overlooking Cross Street, and the narrow horizontal slot windows at the side. As you can see from the photographs here, night time and daylight conditions cause the works to vary greatly.

So this assortment of throbbing sculptures: is there a likely interpretation for these dilapidated symbols? They seem to be from a carnival’s junkyard, but despite being knocked around they function perfectly. Maybe they are anti-factory-fresh or pro-ancient signs, signs that celebrate history and aging and wear and tear - instead of slick and impeccable finish. They seem to endorse experience and time, dues well paid and hard fought battles, of being flimsy and assailed but still holding up.

You might think their appearance suggests melancholy but I don’t think so. As with old shirts these signs - like stonewashed jeans - improve with ‘aging’. However in Roche’s context these works are in sharp contrast to his much earlier kinetic sculptures that revelled in menace via whirling blades and crackling electricity (covered with crypto fascist or Nazi insignia), or the circular lightboxes involving explicit eroticism. They were an extension of his confrontational performance background and exuded menace, malice and taunting - an entirely different ethos from the ‘socially responsible’, ‘Sunday school teacher’, ‘Save the World’ preoccupations in vogue with a younger generation now.

Still one has to be careful not to over-emphasise Roche’s agonistic past. He has made a lot of work with light (especially neon and fluorescent tubes) and computer parts (redundant circuit boards) that was not threatening or aggressive, and this show does have a slightly nostalgic mood - perhaps even (gasp!) a quaintness. I mean, for example, that signs like skulls no longer mean death or danger but have had all terror leeched out of them - through overuse. They are almost the equivalent of hearts, doves and rainbows. One could be mischievous and claim that the distance between Roche and, say, Pat Hanly is not that pronounced. The work is still gruff, physically black, and a pinch bristly, but there is a lot of tenderness (and possibly good will and optimism) too.