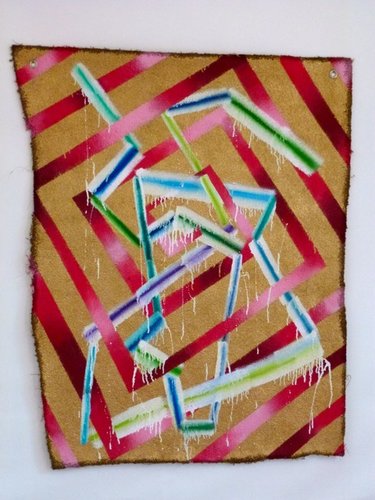 As well as pushing to their animation limit, colour, gestural and design elements, Gouge clearly delights in exploring the potential of existing and new art materials - the clash of their codes. On carpet he often sops up the hairiness with spray paint, using gradation of tone techniques more familiar to street art. Using oilstick and enamel, slashes of energy are built up on top to create strong ridges, cutting into rich checkerboard patterns. At least at first glance, it's the digital matrix gone feral.

They feel fresh, these new paintings on undulating-shaped patches of carpet and plywood. The tone is a bright, strident, pulsing contemporary glam - as if physically expressive visualisations of the current electronic music scene - while appearing to take their careful tactical cues from a range of points across modernist painting history.

At first, I was reminded of the slightly sick-inducing brash colour and tonal clash of a collection of 1980s record covers. Or a play with early computer drawing tools: rich, thick layering of mixed textures, swatches of line and geometric shapes. Yet Gouge’s paintings are both wilder and more complex. I also had an age check moment: music is currently awash with clever, hooky revisions of the angular textural sounds of ‘80s synths. Here the aural digital environment is made visual and physical; big, bold and wavering diagonal strobe marks building flashing motifs.

In their rougher dripping and cutting take on the digital aesthetics’ building blocks they feel of the moment. Another sign there’s juice in the old modernist tank yet. The title is perhaps a pointer: ‘Dusted in Memphis‘ is a 1980 bootleg of Alex Chilton songs, the title itself a cocaine-high take on the Dusty Springfield album title ‘Dusty in Memphis.’

As well as pushing to their animation limit, colour, gestural and design elements, Gouge clearly delights in exploring the potential of existing and new art materials - the clash of their codes. On carpet he often sops up the hairiness with spray paint, using gradation of tone techniques more familiar to street art. Using oilstick and enamel, slashes of energy are built up on top to create strong ridges, cutting into rich checkerboard patterns. At least at first glance, it’s the digital matrix gone feral.

In his small works on jute canvas Gouge paints woven grid patterns reminiscent of early computer games. Here again though disco glitter pinks and creams contrast surprisingly with the more familiar matt tones. Similar works have been shown at Michael Hirschfeld Gallery. For me, for all their complexity, these are far safer, more familiar pieces of geometric abstraction.

I like how Gouge finds new ways to respond to the qualities of the material he paints onto. With an entirely different surface again, plywood, there are washier, earthier bases of colour in oil. Layers painted over and rubbed into with then thicker encaustic-made diagrammatic marks on top. What might sound tired and done to death is made fresh.

Counterpointing the rawness is a clever visual play between the different layers, different elements running under and over each other. Following the palette of the jute works, there’s also a real daring push of the luscious colour and textural combinations (almost tropicalia) with strangely satisfying results.

In a recent article in Australian Art Collector Gouge happens to mention Gordon Walters. There he isn’t alluding to any connection between him and Walters’ work, but there is one: the way some structural systems seem initially basic, yet the more you look, the more they reveal a refinement and complexity in their exploration of an invented visual language.

Perhaps most exciting are the works on carpet. Roughly cut out, with eyeholes inserted for the nails, they speak smartly to the domestic environment they seem tailormade to inhabit, and in particular The Young‘s warm, straight wooden paneled interior, uncarpeted and uncluttered.

Bright and dense primary colour bases, with deeper-coloured fringes, provide an electric playing field for jungle gym arrangements of lines of colour marked in strips of dripping white paint. It’s as if a housepainter has taken a miniature paint roller to the surfaces. There’s a lovely play with the weight of the work - both the carpet and the physical application of paint.

Josef Albers, Ad Reinhardt, Kandinsky, a flood of old-as-the -hills modern abstract reference points come to mind, but none quite fit. I like how (at least in my limited contemporary New Zealand context) these paintings feel very much of their own place and time. I like how Gouge proves there’s life in a rough, colourful and gestural approach, putting into tension with that wildness a formalist’s control of painterly language.