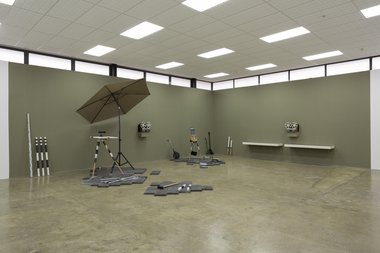 The Artspace blurb introducing the show tells visitors that their interaction ‘requires a suspension of disbelief', one that provides ‘an experience that transcends this time and space.' However aside of issues of ‘transcending time' (the exhibition is a typical trans-disciplinary show of the 2010s) why would viewers take Lockwood and Baker seriously when the exhibition deliberately offers no supporting evidence for their ‘preliminary' claims?

James Beckett, an Amsterdam based artist with a background in history and archaeology, here presents his first New Zealand show in Artspace’s large square gallery. By painting two adjacent walls dark khaki to match the concrete floor, and putting a reel to reel tape deck on each, he has created a museological diorama for displaying the tools and processes of dowsing. It is a variety of anthropological study, examining a form of science thousands of years old that searches for underground water, oil, objects or architecture - and which as a modern day example of the ‘paranormal,’ refuses to die out.

In this elegant presentation - one that is theatrical, like a stage set - we see clusters of uplifted paving stones covering parts of the floor, types of shovel, progress indicating pickets, measuring wheels, gridded boards with their co-ordinate axes, points of activity markers, and charts for recording points of interest. It looks like a form of surveying blended with a film shoot, a checkerboard chopped up and dispersed with occasional props. Along one wall we find displays in two vitrines: one of types of divining rod commercially available (prices included); and in the other, books on dowsing, most of which were published in the seventies and very early eighties.

The two alternating audio tape recordings are a crucial component here, with commentaries from English dowsers, David Lockwood and John Baker, chatting while they scan various school grounds in Amsterdam. Their separately recorded voices and different accents are essential ingredients.

The two men are quite different in personality. Lockwood speaks of psychic energies, of sites of mental and physical torment where once were prisons or mental hospitals, and where now there linger spirits of the dead who can’t cross over to the other ‘realm’. They are left unhappily wandering on a ‘lower astral plane’. Baker is less speculative and melodramatic; more down to earth (to coin a phrase) in his account of how he operates when looking for buried walls.

The Artspace blurb introducing the show tells visitors that their interaction ‘requires a suspension of disbelief’, one that provides ‘an experience that transcends this time and space.’(1) However aside of issues of ‘transcending time’ (the exhibition is a typical trans-disciplinary show of the 2010s) why would viewers take Lockwood and Baker seriously when the exhibition deliberately offers no supporting evidence for their ‘preliminary’ claims? We see no dug up objects, documentary photos or diagrams, no confirming comparisons of investigated sections using historical archives. The show, via the bum-covering caution of its title and the appeals of its supporting text(s), pleads extenuating circumstances.

To ponder such questions we have to consider Beckett’s approach, and if he is a sociologist of history, a recorder of ideas and their development, currency and loss, or if he is a paranormal believer or even promoter? Without being too reductive, and looking at examples from Natasha Conland’s 2007 Mystic Truths exhibition at Auckland Art Gallery, is he an artist closer to Olivia Plender or Joachim Koestler (as a researcher) than say Dane Mitchell or Maria Loboda (who present the paranormal as given)? What is the nature of his interest: observational (but detached) or proselytising? ‘Suspension of disbelief’ I think implies the latter. (Non-thinking is a shocking thing to request in an art gallery: that visitors should unquestioningly accept all that is put in front of them.) He seems to want to nurture the growth of dowsing - and not straddle the dividing line between the two positions - something that goes beyond merely protecting Robertson and Baker from charges of fakery, and professionalism as a historian or artist.

Beckett’s arrangement of seven books in a plinth suggests that he thinks knowledge of the general Auckland public of dowsing is very limited, that his role is educative - but this is hard to accept. On the online catalogue of the Auckland public library there are over twenty-five books listed specifically on this subject, so dowsing is not really that esoteric. In a sense, with the two large vitrines (including the wands with prices), his exhibition is an ersatz display because it blindly avoids critically examining the point of the activity. Instead it fills museum containers with redundant procedural documentation for its own sake.