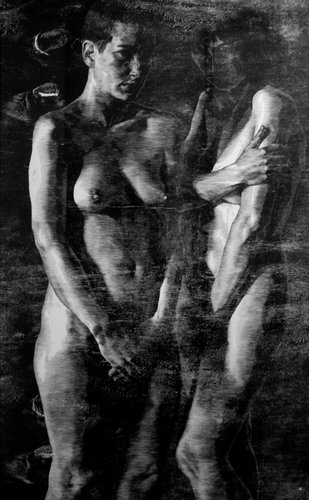 It is not only the moody (or supernaturally ominous) associations that lift the image, but also the sense of some primal emergence - a bringing forth. Plus there is an appealing sense of chaos with the fibrous flurries and swarms of flecks, spontaneously competing with the impeccably rendered torsos and limbs which - though tight - are expressive in their own right.

This presentation of seven Sam Harrison woodcuts, re-presents some images already well known through this Christchurch artist’s exhibitions at Fox Jensen, and one self portrait (2011) not widely seen in Auckland before.

While Harrison’s virtuoso draughtsmanship is to the fore, the works’ real appeal lies is the way he avoids complete realism but revels in psychological turmoil - through accentuating a ‘battle’ between printed imaged and the materiality of the original, wooden, gouged out, inked over plank surface. Even though Harrison‘s observational and drawing skills are sensational, the constant presence of ‘woody’ signifiers - in the form of finely specked grains, knot-holes, and splintery un-inked slivers - draws home not only the image making process but also highly romantic overtones of cloudy, moonlit skies (the knot-holes are like stacked up moons) and swirling eddies of river water.

Harrison’s skill at capturing light raking across solid human flesh is obvious (especially with his meticulous gouging wider of horizontal lines to make the skin glow), as is his shrewdness in occasionally keeping the faces hidden in darkness. However I feel I would not be half as interested in those images if the presence of woody surfaces were absent from the inked Fabriano paper. These traces lift the work to a higher level beyond just simple documentation of the human body.

It is not only the moody (or preternaturally ominous) associations that lift the image, but also the sense of some primal emergence - a bringing forth. Plus there is an appealing sense of chaos with the fibrous flurries and swarms of flecks, spontaneously competing with the impeccably rendered torsos and limbs which - though tight - are expressive in their own right.

Perhaps at the heart of this is a sense of animism, as if the cut board were alive and sentient, and maybe that ‘thinking aliveness’ has been transferred to the paper along with the representations of the models. In a distant way (using a modernist love of marks and truth to materials) this brings an odd whiff of science fiction as well as an unusual nonChristian religious prototype, an unelaborated but alluded to counter narrative that sits strangely alongside the strident, supremely confident personalities of the models. It is more than dignity or pride that they exude. There is a mental strength that resists the corroding forces that have been set upon them.

Yet these images are naked, not nude. (In the Kenneth Clark sense). Strong they may be but these models know they are clothesless. They are assertive (not tough) but still vulnerable. Perhaps ‘wood’ here is a laddish obscene joke about male desire or simply a more sophisticated Biblical trope for guilt and its attendant knowledge (from Genesis)? These are pithy images to ponder over.