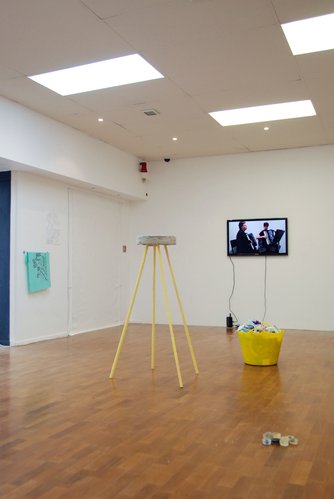 This show, in an almost literal sense, is about art as process, that subject most beloved of certain art aficionados, although a certain element of metaphorical play is at work here too. There's not a single piece of cheese in sight, though there are a couple of jars of fig paste placed on a DIY wooden table. And it is not, I hasten to add - for those already drooling at the thought of “process” - what might be traditionally expected in a show of such focus.

Gabrielle Amodeo, Ena Kosovac, Daphne Simons, Michelle Beattie
If you do start making cheese, I recommend a Farmhouse Cheddar
-or -
At least striving for positivity in the knowledge of a limited time in which one can be productive.

Art practice/practise. The noun and the verb. The current vogue term for doing the stuff, gets a workout at Pilot’s current show (a collaboration with Ramp) that comes with a very long and instructive title. Actually it has two titles, as if the exhibitors were, even in the naming, attempting to demonstrate the nature of the beast.

They are as follows: If you do start making cheese, I recommend a Farmhouse Cheddar - or - At least striving for positivity in the knowledge of a limited time in which one can be productive. It’s a mouthful, but a clever introduction and guide to art about art and the disparate works all of which grace the gallery floor space.

This show, in an almost literal sense, is about art as process, that subject most beloved of certain art aficionados, although a certain element of metaphorical play is at work here too. There’s not a single piece of cheese in sight, though there are a couple of jars of fig paste placed on a DIY wooden table. And it is not, I hasten to add - for those already drooling at the thought of “process” - what might be traditionally expected in a show of such focus.

First, the cheese. Cheese production, by definition, involves a long, involved and convoluted process. Not only that, the product itself has curious properties of ambiguity, occupying, as the headline notes in the catalogue state, “a strange territory: mouldy but edible, malodorous but delicious.” Added to such equivocality is the fact that the stuff is ready to eat at the stage of deterioration, a state where any other food would be thrown out. What does get discarded in the making process is the whey. However in the making of ricotta, whey is utilized; and here of course comes the metaphor part: the catalogue details the “by-products, derivatives and discards” that were involved in the creative processes - notes, anecdotes, conversations, lists, observations, collections of slogans seen on the back of trucks, email exchanges, photographs of attempted art works that failed, Google entries, doodles. The process, mental, physical and the stuff that got tossed, even the stuff that was merely incidental, is documented. And the show itself becomes a record and visible manifestation of that process. Nothing, ironically, is discarded.

Cheese has the same element of ambivalence about it, as does the word ‘practice’. It’s one of those words that encompass opposites - suggesting both accomplishment and the absence of it. It is this contradiction that has intrigued the artists in the show to the point where the ‘works’ exhibited exemplify both notions, though the verb form is more to the fore here.

When one enters a gallery, what is traditionally seen and what one expects to see are the polished, completed and successfully finished pieces. One does not see the failures, the try-outs, the distractions, or the also-rans. The behind the curtain processes that went on in order to produce the completed product are normally kept concealed, hidden, thrown away or left behind in the studio. These artists have pulled back the curtain to reveal not only work in progress, but also work that went on that was not be directly related at all to some imagined goal in mind. All activity, it could be argued, in some way contributes to the production of art, both trivial and significant, and this is what the viewer is given, a privileged glimpse into the human heart, mind and soul of the artist, to misquote F. Scott Fitzgerald.

This show in a kind of way could be a sort of Salon de Refuse, on a personal/professional level. This is something I tried. This is something I found myself mucking about with, in the studio. This is stuff that I got distracted with, that I was playing around with at the time. The show thus becomes a visual record of the artist’s thought process and practice, daydreaming, doodling, attempting things, some of which failed.

The best example of a failed work is Ena Kosovac’s piece called That’ll learn me (previously known as Wall-leaner) (2014). This fast-set concrete and wood construction attempted a demonstration of balance but actually collapsed and broke in pieces while being installed in the gallery space. The ruins of the work lie on the floor as testament to process. Here is a world, in a sense the real world, made up of fragments, of imperfection, of failure that belies the usual one perennially presented; clean, immaculate, perfectly realized like some flawless, pure, utopian, idealized model.

Her work, Butter Legs, a kind of concrete high stool, comes with a wonky base. Feel Free is a sort of bad attempt at a toy, full of contradiction involving a sort of heavy turtle-like construction on castors pulled by an over long lead of string that’s attached to the gallery wall by a piece of Blue-Tack. Anything but free and yet tethered by the most flimsy restraint. Starchy, made of calico, is a ghostly hovering piece of cloth that appears to defy gravity as it ‘floats’ seemingly above the floor without support. And the strange ‘mystery’ of things that don’t quite connect or make sense is continued in a work entitled Mysterious things; small balls of resin in which are encased objects ranging from the expected palm-tree seed to the unexpected and banal dryer lint and bits of bread. Hierarchies are reversed and assumptions challenged while the artist engages simply in the process of playing and trying things out.

The most literal interpretation of practice is the video work of Daphne Simons, a sort of “double take” where the artist is engaged in her practice while filming someone else practising their art. Simons simply records a series of sessions involving different musicians being taught how to play the accordion over a four month period, complete with their fumbling mistakes. The process of learning, for Simons, becomes more compelling than the actual polished later performance.

Michelle Beattie exhibits another element to the process of art making, that of distraction. All the pieces on show are works that she constructed in between her art making, stuff created while avoiding her art practice, that may or may not have contributed to her skills and output; like a screen print of her garden on a tea towel, or a pen on paper piece depicting a menu of party drinks, or a fabric crafted hot water bottle cover, or a construction of artificial flowers, hairclips and headband called We got drunk and made flower headbands. The ultimate slumming exercise.

But it is the work of Gabrielle Amodeo that for me became the stand out piece of the show. It takes the notion of process to a whole other level, reaching an existential intensity in its literal portray of the human condition. Life itself is a process that follows the normal trajectory from birth to death and the artist depicts this in a unique, obsessive and insistent way, as if she were a God-like accountant keeping meticulous records in some grand celestial ledger: the Lambs’ Book of Life.

What she has created are 65 hand-bound books with an imposing archival look that trace her life from the time of her birth to her projected death based on the average life-expectancy of a female her age, which totals 74 years, or 650,000 hours. What she records on each page is simply a list of the days with their dates which are further divided into hours of the day.

The impetus for this work came from Bill Bryson’s A Short History of Nearly Everything. The text Amodeo has taken from Bryson is worth repeating in full, a small typed copy of which is pasted like a branded insignia on the front of each of her volumes.

The bad news is that atoms are fickle and their time of devotion is fleeting - fleeting indeed. Even a long human life adds up to only about 650,000 hours. And when that modest milestone flashes into view, or at some point thereabouts, for reasons unknown your atoms will close you down, then silently disassemble and go off to be other things. And that’s it for you.

This modern memento mori, beautifully crafted, is stacked in a row on the gallery floor like a series of encyclopaedias or Doomsday tomes, one volume resting open at the page that is the artist’s present life, which the curator opens to the appropriate leaf each day, engaged in the ultimate expression of process. The process of life thus becomes a kind of art and art in turn becomes a kind of life. We practise at our practice and then we stop practising.