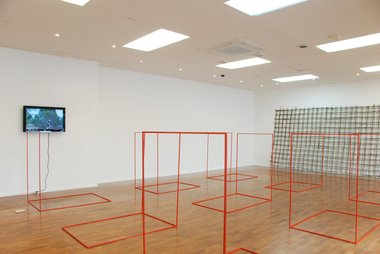 The conundrum of space in current populated city environs is thus confronted, how humans construct themselves in three dimensions, how the body negotiates the repetitive square, the grid that captures us like an impounding net; a web of our own nefarious making. These precise rational and regimental forms, equi-distance and replicated, come from theories to do with holism in space, and form that yearned for spiritual harmony while confounding us with isolation and fragmentation.

Place, space and the body. These are the coordinates that define the parameters of discourse currently under discussion at Pilot. Two artists with five works, At-one-moment by Alex Luiten and Hannah Valentine involves sculpture, video and photography.

Land is a site of political contest in this country and the split has been traditionally couched in terms of Maori’s deeper spiritual attachment in contrast to Pakeha’s more shallow material and utilitarian connection with place and property. Sell, sell, sell.

There is enough truth in this polarity to take it well beyond caricature. Alex Luiten however in his work, Clover Fescue Rye, presents a scenario that attempts to reverse the typical narrative. Returning home from an urban Auckland Art School environment, the artist revisits his parents rural property, where he grew up, a nursery in both senses of the term (the place was/is a garden centre) he finds a way to express his fundamental bond to the place, borrowing from the Land Art practitioners of the seventies, and sets about, on a fallow piece of ground on the property, to trace his lineage and connection, like an animal marking its territory.

The work involved the action of walking around the parameters of the space for eight hours, wearing out a track in the grass and then documenting the process with a photograph of the trace with its worn indented line. It evokes the work of British artist, Richard Long who created something of the same in the late sixties.

Such a line speaks of habitation, habitual occupation, conjuring notions of all those ancient ruts and traditional travelling tracks which man and animal carved in the earth over successive eons which signify the presence of consecutive place bound generations. Such ancestral things can carry an almost metaphysical weight, grounding an individual, a community, making one feel less ephemeral, generations ageless and eternal perhaps, tracking deep in the channels of time.

What Luiten has done is try to replicate that on a small scale, a simulation to show the nature of human presence in place and symbolically attest to the artists own special link with space that speaks to the drag of locale and the call of site. It is a construct for sure, but one that bears testimony, particularly in the manner of its making, to a primal animal presence and oneness with home.

That preconscious connection to earth and time is revisited in a video work (Brown Aggregate) that simply records the action of three young men- all dressed the same- who shovel a large pile of dark loose earth from one spot to another which is immediately adjacent to the original pile. The action seems at first glance both humorous and absurd; the old joke about digging a hole to bury some dirt, or the surreal jibe about counting holes in Blackburn Lancashire, (the Beatles) immediately come to mind.

But as the action continues, which runs for just over eleven minutes, other considerations come to the fore as this perennial drama plays itself out, an act which itself is generic, and the men involved in repetitive movement find a rhythm until they’re lost in a dance, heaving earth in an unconscious sway. The mind is overtaken by the body rocking in a cyclic move as earth and action find themselves at one. It’s all very D H Lawrence, but in a good way.

Repetitive unconscious action is employed by the second contributing artist, Hannah Valentine, in her video piece entitled, Skip Motion Repeat. What the viewer sees is a close-up image of the arm of a fitness freak repetitively turning as the gym attendee goes through her skipping workout routine.

Valentine is interested in the body in relation to urban space. The setting for this activity is the densely populated inner Auckland city where space is a premium. This gymnasium, as a consequence, is located several stories up in a high-rise building. The claustrophobic visuals of the video where the camera singularly focuses on a solitary turning arm fixed in one place (and taking place several stories up in an urban conglomerate), becomes a potent image confronting the question of body/space dynamic. In context, the repetitive and monotonous action takes on unsettling qualities. In reality urban life reduces the necessity for physical activity and thus the gym and the cult of the body, a hangover from the eighties, becomes an artificial construct, a ‘fake’ exercise to create a simulated self.

Her second piece in the show, Britomart, is architectural in concept. A series of welded steel rods painted in orange prima and configured in exact geometric form, (like three dimensional diagrams), are arranged in a strict grid pattern on the gallery floor. It recalls something of the Bauhaus aesthetic in its devotion to pure and simple geometry, but with a contemporary industrial overlay.

The conundrum of space in current populated city environs is thus confronted, how humans construct themselves in three dimensions, how the body negotiates the repetitive square, the grid that captures us like an impounding net; a web of our own nefarious making. These precise rational and regimental forms, equi-distance and replicated, come from theories to do with holism in space, and form that yearned for spiritual harmony while confounding us with isolation and fragmentation. Dislocation between the body and the hyper-reality of the city life is the division, the wound that refuses simple healing.

Luiten takes up the network motif in a final work, 1560 Willow Steel, where he attempts to fabricate some compromise between the world of urban structured rigidity and the nature with her organic freedoms. To this end he employs willow sticks woven into a large lattice framework four or five layers deep which is then lent up against the gallery wall. It creates an aesthetically satisfying sight, the look of weaving or impromptu sketch lines drawn on a wall, but it also recalls the configuration of steel reinforcing mesh for concrete flooring. Such ambiguity - there are no straight lines in nature - sets up a vision of contradiction, a cul-de-sac where two worlds collide and refuse to allow room for easy concession.

Such a moment, when everything and all division collapses, is an ideal perennially reached for but perhaps out of reach, the artists suggest - past all but some trance induced construction, lifting the body into an unconscious plane.

This intriguing, clever and provocative exhibition has brought together two artists whose synergies complement one another in a show that confronts some of the big questions that bedevil contemporary life.