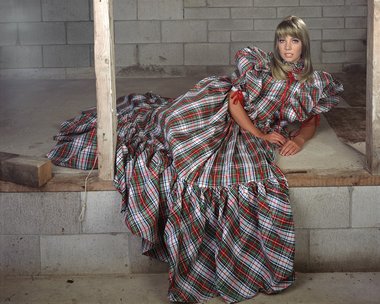 Todd explores the beauty and unease of the language of commercial photography. There is both daftness and dislocation in the history of its framing devices that she mines. What empty pipe dreams we have been sold.

Afterwards I feel icky, like I’ve just come out from under anesthetic. Strong and engaging yes, but the experience has also been rather unpleasant. Troubled and entertained, I’m left feeling as hollowed out as the models in Yvonne Todd’s photographs.

I know I will be bothered by this exhibition long into February. This is a good thing. Yet I don’t want to live with these works. I like the idea of them inserted into the public bumping spaces of galleries, lobbies and surgeries. Putting a needle in the side of the comfortable, saccharine and sentimental.

Taking over an entire gallery for a summer? Now that’s brilliantly creepy. City Gallery as a popular cultural crypt, full of disturbing yet laugh out loud traces from banal, glittering dreams.

Haunting is a form of possession and these figures haunt me. I know I won’t find much life in them beyond the creepy and gawky glamour, the disguised pain. They speak of the grotesque and inane twists in society’s obsession with its own trashy surface image. I laugh at the sharp wit, swim in the exquisite surreal word and image play, and amplify the numbness that growing up in suburbia gave me. Unsettlingly, the models look away or stare through me. Emotionally I do not own these images in the way I am encouraged to by those in a magazine or on the screen. That’s quite an achievement.

Creamy Psychology is a very good title. With Todd’s work taking over the entire City Gallery, our sense of being trapped, emptied out and dislocated is heightened by being captured by the camera. A loop from the opening moments of the 1967 film Valley of the Dolls, displayed in one gallery, swims around and around in my head, just as its sound echoes disembodied in these grand chambers.

These images stress feelings of isolation, our own awkwardness, the theatrical airs we carry, and hysteria underneath the surface. There are no group photographs. The few smiles are tense and tight. Yet there’s also revelry: a celebration of culture in all its dodgy guises, the love of dressing up and of escaping to some place other. Todd’s subjects own their strange, complex space.

Todd explores the beauty and unease of the language of commercial photography. There is both daftness and dislocation in the history of its framing devices that she mines. What empty pipe dreams we have been sold.

Filling the entire City Gallery; isn’t it all a bit much? Yes and no. There’s no escaping the dark suburban claustrophobia, an uncomfortable but powerful experience.

In the Hirschfeld Gallery, Todd’s 2014 project featuring portraits of Vegans and two moving image works are weak in the company of other items. In the placement of portraits of an ‘ethical minority’ there’s seems a sly dig at the Hirschfeld’s previous reservation for Wellington artists. Yet, other than the work in the Hirschfeld space, there’s not much else I would take out. As a survey of a mere 15 years or so of practice, containing some 150 works, Creamy Psychology demonstrates how strong and focused Todd’s practice has been, and also how prepared she has been to try out new approaches.

Scale feels important to the relationship we have with Todd’s figures. They aim for fake gilded frame-like grandeur. The characters loom large, yet are not really present. The big spaces of City Gallery help with this tension.

Todd works well in series. Having the whole gallery allows a full spread in different rooms, demonstrating varied approaches. It also gives Todd and curator Robert Leonard the room to play. Her Wall of Man series for example - gents in their suits and ties in pretend company photographs (who can we trust?) - face across from hippy Gunther, naked but for loincloth, and a woman naked but for matching frilly underwear, wrist-warmers and parasol (Did Anyone Tell you That You Are Pretty When You Are Angry?). Quite some grouping. Very different from Todd’s women in high-necked gowns, who show little skin.

There’s also room for Todd’s second cousin Gilbert Melrose’s black and white social portraits of costumed children - Todd’s selection marked by the strain and lack of smiles of the parentally-imposed photograph. Their inclusion emphasises that the tensions between photographer and subject in Todd’s work are firmly based in the popular and commercial history of the medium.

Downstairs in the West Gallery two strong series of female headshots - Sea of Tranquility and Bellevue - get to face off from each other: one of cosmetic counter workers in their own clothing, the others heavily made up as Mormon starlets in Todd’s costumes. Both speak in different ways about the humanity of imperfection.

Then, a small entrance leads you into a back gallery space dominated by images of the young heavily made up girls on the one side (the Vagrants Reception Centre), and the crippled on the other (the effect of darkening some figures’ faces has always annoyed me). The room is strongly held at one end by Pupators - the modeling of sweaters in flat-chested yet invisible bodies - and Empire, a group of inhalers floating in the sky. A room about the awkwardness of growing up (an expansion of a suite shown by Leonard in the AAG 2005 group show Mixed Up Childhood) there’s dark wit in it’s placing - as if these images should be restricted viewing. Generally I’m unsure about how I feel about taking my children to this exhibition - will it liberate them, or give them nightmares?

The central spaces of the gallery are held for the more general appeal tragic glamour works, trading off the fashion images of women in frocks in magazines. Here you get to learn just how deep a costume collection fetish Todd has, and how much they lead the development of the images. The Hancock Gallery at the entrance downstairs is centred around Todd’s still terrific Frenzy, while upstairs on those circular rostra beloved of the 60s and ‘70s Claire Regnault has curated a selection of images of glittering dresses worn in Todd’s photographs, including the vintage beaded and rhinestone gowns of American Bob Mackie. I’m less interested in these big glamour prints - they feel more about fashion than the uneasy space they inhabit - but they hold the room.

One of the strongest suites playfully brings together three Todd self-portraits (two as noted, different, tragic, real life characters) with landscapes and objects. Bubbles and pipes, empty signs, floating driftwood, a toxic puddle, a manmade waterfall, disembodied hands and feet - it’s sharp, trippy and surreal. Some of the best images are not what you’d consider ‘Yvonne Todd images’, and it’s the show’s scale that helps make sense of them.

This suite is like a David Lynch narrative, with a range of clues surrounding an unspoken teenage tragedy in suburbia, or the work of a brilliant high-end commercial photographer, madly whacked out after years of product placement and fashion industry parties.

The wall texts bring the artist into the work: the Yvonne Todd story. This gives the public a way in; stressing Todd’s work is based in an experience of culture many are familiar with. I find it interesting because its something my viewing of Todd’s work has done without perfectly fine previously. It’s a disturbing quirk of the big public gallery solo show: the need to embed the artist’s ‘story’ into the exhibition experience.

Leonard and Todd amplify this with a fascinating room upstairs devoted to her influences: classic photography from the Te Papa collection, vintage magazine covers, notebooks and miscellanea from Todd’s North Shore teenage-hood. The latter ranges from a set of glamour make-over photographs to a letter from North Shore Hospital about an eating disorder - above it teasingly an envelope with the hand written note, “Too much information?” You become aware of the exhibition as a form of biographical construction, and one as trashy in its simple throughlines as the tragic real life stories of celebs Todd draws from.

At least this is my take. With Creamy Psychology you become very conscious of your own self, as if the works were wacky fun fair mirrors in a haunted house.

I have little interest in fashion, and the different codes suggested by wigs and glasses. But I too grew up on Auckland’s North Shore in the 1970s and 80s. I’m reminded of days home, sick from school, my head cloudy, lying on the shagpile, staring up at the cameo-framed portraits on the wall, half watching the soaps with my mother, listlessly picking through trashy books in the bookshelf. That cotton-woolled cultural isolation, that suburban angst with its reach for synthetic glamour - it is all part of me. I walk away from the gallery feeling like someone’s been poking around in my innards.