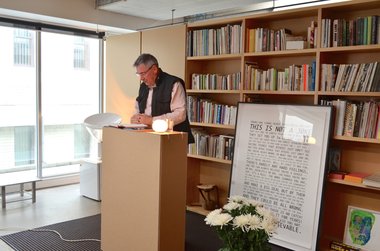 This use of found text to make a poem goes back to Curnow ‘snipping' newspaper ads for Auckland real estate, in the early seventies, so he could splice chosen phrases into a wider field of fragmented (disconnected though parallel) thoughts: his own ‘voice' mixed with several others. In his art criticism his writing often overlaps with aspects of his poetry, and comments on itself and its process-oriented production methods.

Wystan Curnow
The Art Hotel: As a Scene for Reading

Hot on the heels of the launch of Wystan Curnow’s recent anthology of critical writings - a selection from over forty years of thinking about New Zealand art and its place in our culture - comes this, from this country’s most experienced art writer, curator, cultural essayist, poet and teacher: his fifth book of poems, published as part of a show at split/fountain.

There are seven poems in this tight little anthology of twenty-eight pages. (Nine pages are of photographs of Curnow reading within the architect Dino Chia’s installation of suspended foil sheet and brick platform/podium.) Four poems were read at split/fountain in 2012 and three last December.

The reading two years ago was part of Chai’s exhibition series Bare walls, empty room, (14 July - 18 August 2012), curated by Layla Tweedie Cullen, Jacob Barratt-Boyes and Nat Cheshire. This project aimed to exhibit architecture in a new format and promote discourse around the work of emerging architects in New Zealand. Chai produced six short exhibitions and for the third instalment created a scene especially for the first reading by Curnow - held on National Poetry Day 2012 (9th October).

Last month’s reading was at the end of Untitled (set up), an international show of works on paper (13 November-15 December 2014) organised by Jacob Barrett-Boyes with a reading podium he designed. A larger set of Curnow’s Art Hotel poems (three of which are here) is hoped to be published next year.

The three poems heard last month - in the order they were presented - were Red heat, I know full well: after Picasso’s The Burial of the Count of Orgaz; and Matisse asleep. They were all distinctly different in character. Calculatedly so - to make a reading full of surprises.

Red heat was an appropriated text from the Art Hotel series where online texts that use exhibitions and collections to market hotels for collectors of contemporary art are lifted intact. The pitch (written by a PR person called Mark Ellman) is quoted verbatim so the promotion that can be scrutinised and the peculiarities of the language mocked, endorsed or puzzled over - as are the explicit assumptions about the clientele and their desires. By looking at the original website www.concierge.com/ideas/cruise/tours/1392?page=9 we can think about what happens where certain words (WHERE; THE DRAW; THE SCENE) are capitalised, images removed and contextual material erased.

This use of found text to make a poem goes back to Curnow ‘snipping’ newspaper ads for Auckland real estate, in the early seventies, so he could splice chosen phrases into a wider field of fragmented (disconnected though parallel) thoughts: his own ‘voice’ mixed with several others. In his art criticism his writing often overlaps with aspects of his poetry, and comments on itself and its process-oriented production methods. This seeming interchangeability was conspicuous with Modern Colours (2005), a book of poems where, like this one, art historical figures are central to the often appropriated texts, featuring in found prose carefully arranged on the page to be transmuted into poetry.

The second work Curnow presented was I know full well: after Picasso’s The Burial of the Count of Orgaz, a text that referenced Picasso’s formidable talent as an experimental writer, as shown in the comparatively recent anthology assembled by Jerome Rothenberg and Pierre Joris. Rothenberg himself as a friend visiting the author in France, and the book as part of an included list, both briefly feature in the poem which if it has (as a dense field) a detectable unified theme, could be a riffing with numbers (through non-existent footnotes), a making of inventories, a delight in the sound (English and other languages) of recorded names and myriad qualities, fun in counting, and mangling with half-puns, idiomatic vernacular.

Here is a small chunk taken from its ending:

“so I ask you, flummoxed as we are by fragrant mists of lips (6) glossiest, the partings and pursings, dubious pursuitings, shifty drifts (1) not to mention the draughty shits, or shirtless drifters) and fests of feeling: give us, give us an inbox (2) for similar similes see the author’s earlier Modern Colours, Jackbooks, (2005), a touch screen, and a glistening ingot on an old night stand, and let us progress the programme…measure our exorbitancy in arrobas (3) ‘the violets hummed drop after drop.’ See Picasso, The Burial of the Count of Orgaz & Other Poems, Exact Change, 2004, 72, and (4) and (5) and (6) and index the velocity of its transit (ferocity) our shoot-through to plethora, paths blasted clean through the walls of the city on this day…” (1)

If you click on this youtube talk (https://www.youtube.com/watch?v=kxHnDzZDPKk) by Jerome Rothenberg about Picasso’s writing, 36.50 mins into the lecture he reads from the last part of Picasso’s Hunk of Skin, as translated by Paul Blackburn, spotlighting a section that revels in shopping and laundry lists and obsessive counting. There you can see the properties that excited Curnow with his own writing practice, and which come out in the above poem.

Although Curnow is sometimes regarded as a New Zealand exponent of Language poetry, the last poem read surprised by being not a continuous block of text, but divided into stanzas, and having lyrical poignancy and repetitive loops that could have been made by Wallace Stevens or Gertrude Stein. Matisse asleep is a story about insomnia, based on a biographical detail that Curnow may have discovered in Matisse’s letters or which he might have created. It might even be about Curnow’s own sleeping habits - the point is not so much the narrative (and its factual accuracy) as its fastidiously controlled cadences and pace. It is gorgeously aural, superbly crafted and strangely moving. Here are the last three of the eleven linked stanzas:

without fail, Matisse manages
without a light without the radio
or the raised voices at four am
the broadcast of the radio play
at four o’clock in the morning

Compare this to an earlier poem, Vence Yellow, that references Matisse in Modern Colours (you can find it here) - one about the changing yellow light in his chapel in Vence, France. Here is the first half (before he starts enthusing about blue and the sheen of butterfly wings)…

We can see the same playful use of repetition and small modulations in both. They differ in that one is ‘about’ looking at light passing through stained glass windows, the other ‘about’ a solution for a medical problem; one pondering the viscerality of glowing colour, the other contemplating a revered elderly artist and his biographical narrative. The latter succeeds in generating a musicality and emotional impact akin to those Vence chapel windows and - though missing from Curnow’s actual on-site Vence writing which ends up comparatively convoluted - is present in the more recent ‘insomnia poem’. The cadences are accentuated to become something more compelling. Like good jazz, it effortlessly swings. Not meandering or over complex but with a propulsion that locks you in so you can’t let go.

Readers interested in the connections between art and poetry might want to look at Frieze #164 (June 2014). Articles by ...

Readers interested in the connections between art and poetry might want to look at Frieze #164 (June 2014). Articles by Quinn Latimer (http://www.frieze.com/issue/article/art-hearts-poetry/) and Matthew Rana are especially absorbing.