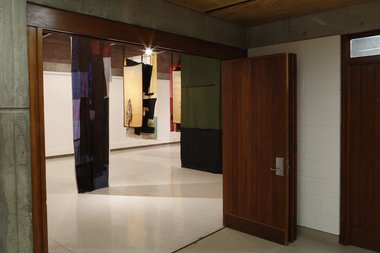 Fit-out for Olivia Spencer Bower is timely because it may also be the first time in which a recipient has made Spencer Bower's art the subject of her work. On the evidence of the installation in the Ilam Campus Gallery this was a sincere decision. Fitts' suspended textiles looks as though they could be recently discovered work by Spencer Bower: subtle colour harmonies reminiscent of John Piper or Paul Nash; a summary treatment of form that positions Fitts' work between abstraction and figuration; a body of work that is essentially domestic in subject.

The Ilam Campus Gallery has opened its 2015 programme with a timely exhibition from Emma Fitts, the 2014 recipient of the Olivia Spencer Bower Foundation Award. Her Installation, Fit-out for Olivia Spencer Bower represents the successful culmination of her time as the Foundation’s artist-in-residence, but also touches upon questions about contemporary New Zealand art’s inability to consider the wider picture of its culture, art history and lineage.

Fitts is the 27th OSB recipient. Since 1987 the award has provided opportunities for artists to develop their practice free of financial constraints and the need to maintain a ‘day job’ for their art. The award offers a twelve-monthly fee totalling $30,000 as well as covering studio costs for the same period.

Set up by a practicing artist as an award for other practicing artists its success can be measured in the number of recipients who continue to maintain a substantial presence in the arts. Seraphine Pick, Jim Speers and Kristy Gorman are only three of a very long list. Indeed, rather than her legacy as a painter, the Olivia Spencer Bower Foundation Award has become the vehicle by which the artist is now best-known.

So, Fit-out for Olivia Spencer Bower is timely because it may also be the first time in which a recipient has made Spencer Bower’s art the subject of her work. On the evidence of the installation in the Ilam Campus Gallery this was a sincere decision. Fitts’ suspended textiles looks as though they could be recently discovered work by Spencer Bower: subtle colour harmonies reminiscent of John Piper or Paul Nash; a summary treatment of form that positions Fitts’ work between abstraction and figuration; a body of work that is essentially domestic in subject - sewing, textiles, blankets and the spaces of home.

It is also an agenda shared in works exhibited by Fitts over the past 18 months: Bomber Jacket for Marilyn Waring, Sports Jacket for Marlow Moss, Yolk and elbow pads for Olivia Spencer Bower and Fishing Vest Pockets for Olivia Spencer Bower. Yet to perceive these works and Fitts’ current exhibition as simply a tribute to Spencer Bower limits the intentions of her ambitions. In the first instance, the painterly nature and attention to fabric and materials are consistent with Fitts’ practice as it has evolved over the past decade, reminiscent of her series of crushed and crinkled wall-relief canvases from 2008.

This is not to deny the curiosity Fitts demonstrates towards Spencer Bower’s oeuvre. Over more than 50 years Spencer Bower consistently reconsidered and reinvented her practice: socially engaged paintings of the family life of Māori in Rawene in the late 1940s and Neo-Romantic images of a collective of women spinning wool in the 1960s. In addition to painting, Spencer Bower also championed craft and textiles. In 1968 when the Canterbury Society opened its new building on Gloucester Street she proposed a series of exhibitions of spinning, weaving, dyeing, rug making, knitting, painting and printmaking.

Such work anticipated the politics and iconography of Feminist Art in the 1970s. It would have come as no surprise to anyone who knew Spencer Bower that she was also a participant in the Women’s Environment installation at the Canterbury Society of Arts in 1977. For three days the gallery was restricted to women only who sought to ‘feminize’ its spaces by representing arts practices often perceived to be outside the domain of the fine arts. For example; children’s art and textiles. Artists included Allie Eagle, Marian Evans and Pamela Wolfe.

Something of this vitality is acknowledged in the exhibition catalogue for Fit-out for Olivia Spencer Bower by Melanie Oliver - the connection between the Ilam Gallery’s installation and the artist’s home at 15A Leinster Avenue and the blurring of divisions between public and private spaces in her life. The metaphor is also extended to the inclusion of materials from junk shops, implying other - but no less relevant histories - present in the gallery space.

Connections are also made with Spencer Bower’s long standing association with The Group and artists such as Rata Lovell-Smith, Evelyn Page, Ngaio Marsh and Louise Henderson. Yet descriptions of her as one of several women associated with The Group who were ‘independent, opinionated, successful artist’ remain somewhat unresolved with the accompanying recognition of the ‘importance of conversation and collaboration for the production and reception of art’ in Spencer Bower’s work. Both touch upon two distinct aspects about making art; the collective engagement of artists working together with a shared sense of outcomes and the more stereo-typical notion of artists as independent and opinionated individuals. In the latter there is an all-too familiar positioning, suited to popular art histories.

If a choice has to made, Spencer Bower’s life as an artist is a story about socially engaged and community-centred art practice. This is evident in not only the imagery of her painting but also in her disinterest in making judgment or distinction between professional and amateur artists. For example, she also sketched and painted regularly with members of the Canterbury Society of Arts, Ashburton Art Society and Mid-Canterbury Art Society. Former president of the Ashburton society, Kath von Tunzelmann (1923-2008) recalled working with Spencer Bower and the importance of the encouragement that she consistently offered to her and other artists.

The failure to fully acknowledge Spencer Bower from this wider social perspective is important. It provides a more accurate recognition of how the arts were sustained in post-war New Zealand until the late 1970s, and adds to a greater understanding of Spencer Bower’s practice as an artist who drew strength from the communities that she belonged to and also sought to give back to.

Of course, this is also an art history story about collegial support as central to positive outcomes for an artist and their work, rather than a more immediately appealing one about risk taking or challenging the boundaries of arts practice. Community as central to nurturing the arts represents a narrative quite removed from those that still frequent gallery texts and the country’s art publications.

It is also worth noting that the visibility of the Spencer Bower Foundation Award, over the work of the artist is also symptomatic of the lack of attention currently accorded to many artists of her generation. For young curators in public galleries, the mention of names like Doris Lusk, Nugent Welch, Rata Lovell-Smith or Rudolf Gopas is likely to be met with a respond like Doris, Nugent, Rata and Rudolf who?

Fit-Out for Olivia Spencer-Bower is a timely exhibition because of its consideration of her work and her advocacy for the arts and its communities. If it is also Fitts’ most realised series of works to date, it is equally important for its implicit invitation to curators, art historians and practicing artists to reconsider the context for a work of art within current limitations of thinking about, discussing and debating contemporary practice.

Thanks John. A wonderful person, academic and teacher. There is an insightful and touching obituary with comments from colleagues, family ...

Julie King has just died. A generous, warm-hearted art historian whose most recent project was a biography of Olivia Spencer-Bower, ...

Julie King has just died. A generous, warm-hearted art historian whose most recent project was a biography of Olivia Spencer-Bower, Julie will be much missed. Our hearts go out to Jenny and Julie's family and friends.

Thanks John. A wonderful person, academic and teacher. There is an insightful and touching obituary with comments from colleagues, family and friends to Julie just posted on stuff: https://www.stuff.co.nz/the-press/news/109334570/life-story-julie-kings-entire-life-lived-for-art