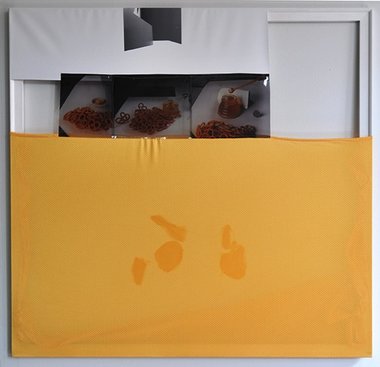 Broughan was once employed in something she now grinds her teeth over. In her former life as graphic designer she was involved in the seduction of the image - and manipulation of its surface glamour - to sell goods. In reaction to this her oeuvre now seems to be preoccupied with a deliberate disruption of the visual lies perpetrated in the name of commerce; even the lies the art world itself engages with.

Former Hamilton artist, Jude Broughan, went on a holiday to New York and never came back. When it came time to return to New Zealand, she didn’t want to leave, so she didn’t. She finished her degree in America, transferring from Elam and graduating with a MFA from Hunter College, New York. She has been working and exhibiting for several years in New York, much like another Kiwi, Max Gimblett, in choosing to work offshore, an expat made good in the Big Apple. Based in Brooklyn, her catalogue of recent solo and group shows lists galleries from New York, Miami, Brooklyn to Vienna.

Her work might be liberally characterized as Mondrian with pictures, those pictures being scraps of photographs that are sometimes of the tops of buildings, sometimes of nature (trees, flowers, leaves) and other times of manmade food products. Throw in Lucio Fontana’s trick of cutting holes in the canvas and you have essentially Broughan’s methodology.

The cutting into the canvas does two things. It exposes the constructed nature of the subject while also providing a simulation of depth, which seems like the contradiction it actually is. Such incongruity and paradox is the essence of this artist’s practice.

It produces a visually captivating spectacle where a variety of collaged elements are juxtaposed in an energetic and oppositional manner. Minimalist abstraction rubs up against textural surface, flat perspective takes issue with three dimensionality, splashes of globular paint work alongside geometric hard-edged forms. Stitching is sometimes used to hold elements onto the canvas while fabric and other materials are often positioned with film transparencies. Gel medium likewise appears, splattered on stretched ‘canvases’ which might be anything from cotton to nylon aertex fabric.

Although delighting in various contrasts and mixes of mediums, Broughan plays essentially with form, line, space and colour, all the standard ingredients an artist might use, but she does so in a unique and arresting way. No substance seems foreign. Scraps of leather, vinyl or plastic all find their natural place in her creative process.

Much of this is pure aesthetics, how form and shape and line and composition all cohere to produce visual intrigue, but there are one or two slight political overtones in some of the pieces. The work which provides the show’s title - Honey - references, via large format film transparencies, images from an ad campaign for the marketing of honey.

Broughan was once employed in something she now grinds her teeth over. In her former life as graphic designer she was involved in the seduction of the image - and manipulation of its surface glamour - to sell goods. In reaction to this, her oeuvre now seems to be preoccupied with a deliberate disruption of the visual lies perpetrated in the name of commerce; even the lies the art world itself engages with.

In the work, Honey, a conventional white picture frame has strips of vinyl and fabric stretched tightly across it while still exposing parts of the frame. Square gaps act as geometric forms, even though they are simply opening spaces on to the gallery wall. At the same time they help break the illusion of the art and expose the falsehood of the whole edifice.

Random splatters of gesso and gel medium add to the anti-aesthetic while ironically complementing the beauty of the work as a piece. This play of opposites and contradictions is a persistent theme. Elements of mystery (what’s that black form intruding at the top of the picture?) compete with the obvious and banal imagery of the honey pot.

Again the show’s title, Honey, might allude to the idea of art as a honey trap which Broughan is determined to spring, and yet she finds herself caught up in the visual pyrotechnics of it all, even while subverting its ploys. She utilizes the stratagems while at the same time working against them. The result is an off-balanced beauty that is immediately apparent. The ‘yes’ and ‘no’ compete for ground in this aesthetic tussle.

Festival (2014) is anything but festive with its monotone grey colour, loosely hung from the gallery wall on pins and looking like some desultory off-cut from a factory run, complete with a wonky rectangle cut out of its middle. And yet it plays the Mondrian game where absence and presence juggle for position, where balance and counterbalance tip one way then another without complete resolution, in ways that provide pleasing tension.

Spiders on a Bridge at Night and Stock do the same. There is a deliberate roughness of handling with line and form where things don’t quite line up or cohere, lending a sort of haphazard look that is calculatingly clumsy or makeshift. Precision here it is set against a throwaway ‘carelessness’, creating a nice pictorial frisson.

In all of this there exist elements of Arte Povera and Dada: cheap materials collaged together that critique both the worlds of commerce and international art, where millions of dollars change hands over the sale of some media inflated masterpiece. Nevertheless Broughan is not averse to using the same graphic artifices, albeit in a new and challenging manner. It is ambiguities all the way in this engaging exhibition.