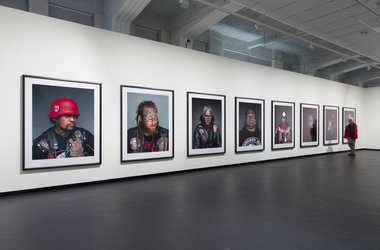 This exhibition did not make me feel safe or good. I was reminded of 'Exhibit B' by Brett Bailey, which I saw in Edinburgh last year. Both Bailey and Rotman's work have been subject to controversy. In 2014 Gow Langsford received hate mail and media scrutiny when 'Mongrel Mob Portraits' included Shano Rogue - who was at the time in court on a murder charge. A few months later in London, 'Exhibit B' was cancelled after 200 protesters gathered outside the Barbican on its opening night.

‘…despite their fighting the good fight and being run by lovely, committed people, too many of them feel exclusive. The taxi driver who drops you off at them has never been inside. They’re too narrow, too defined by class. Here’s what I mean. I grew up in working-class Belfast. Despite being brainy - so I was told - I did not go to many of the city’s arts venues. Our school took us once to the Queen’s Film theatre and once to the Lyric theatre. They were fantastic, but felt foreign - it was like being on safari.‘ - Mark Cousins, The Guardian, August 2014

Jono Rotman’s large-scale portraits of Mongrel Mob members come together as a show that crosses thresholds and exposes profound and uncomfortable distances in our society. The images are like plays-within-plays: there is the person and then there are the layers of meaning they are cloaked within - from the patches, to the tattoos, to their gang-appropriated titles. Who are we looking at? And are we entitled to judge?

Shano Rogue (2010) stands out among the group as a disturbing portrait. Shano is hooded, with the white of his eye gleaming through the shadow. His body is twisted so that we can clearly see the Mongrel Mob patch on his shoulder. He has full facial tattoo and every inch of his jacket is covered with mob insignia. He is at once pitiable, intimidating and interesting. The combination of these things is confronting. Something feels off.

Here I am, comfortable in Wellington’s public art gallery, moving from portrait-to-portrait (in one of those situtations of silently improvised choreography with the other patrons in the room) staring and judging while trying not to judge. Everyone in the room is a stark contrast to the men on the walls. And I’m not uncomfortable assuming they’re all also having some kind of internal tug-of-war: there’s pity that’s provoked, but that reaction is in conflict with the images of power, awe and unapologetic pride in a culture that is so private and unknown to the majority.

Among those beside Shano are Bung Eye Notorious (2008),  Greco Notorious South Island (2008), and Denimz Rogue (2009). These men stand out as portraits conveying steadfast pride and power. Denimz looks over us into the distance with a red-spotted scarf at his throat and with a face covered in intricate tattoo - you can see Māori design, bulldogs, a spider’s web and the words ‘mobster’ across his forehead. He looks healthy and he looks strong. Greco looks directly into the camera with glowing eyes and a German military-style biker helmet framing them at the top. He also has a red-spotted scarf to go with his heavily branded red leather biker jacket. You can see mob insignia, swastikas and another face covered in tattoo, this time with the appearances of more traditional facial moko.

The size and scale of the photographs and the dark, plain background force a close observation of the men and what they’re wearing on their bodies and skin. I found myself grappling with the set of assumptions that those details provoke: gangs rarely get good press in New Zealand. This exhibition carries with it the full weight of everything you ever heard about gangs and the Mob; but it begs us all to feel the full weight of our own capacity to react differently.

Alongside the portraits are snapshots - scenes from that extended reality that you can’t get in a context-less portrait. Notorious Snapshot #24 (2014) has that old-school look about it. The faded, sepia colours make it look like it comes from a family album from the 70s and the scene says the same thing. Five guys in a circle, leaning on a car, having a cigarette, casually flipping the fingers at the camera: it’s a relaxed, familiar image, but for the fact of the prominent swastika and the ‘Mongrel Mob Auckland’ on the back of the jacket of the man in the middle. Denimz Collage #3 (2014) is a wall of faces, scenes and signs that represent the depth of history, the hierarchies and the sense of memory and nostalgia of an entire family. You can see images that look like Rotman photos sitting beside black and white photos of smiling, waving men, of grimly staring men, of groupshots and clusters of headstones. These images give us more - some context to hang on to.

Jono Rotman’s show brings a fragment of these people and their culture - edited, blown up, expertly displayed - into a gallery and very far away from the realities of their existence. But in this space, they are not so far away from the realities of the wider populations mode of judging them. Images, reports and fleeting sightings are - I think - the most common interaction with gangs and gang members. Generally, any real understanding of gang culture, of the individuals and the families is limited.

This question of gallery spaces being elite, and being designed to be impenetrable to all but the worthy and the brave is a long-brewing one. The article from which the quote above originates is one perspective, and the recent article by Mike White in North & South (May 2015) is another (with a decidedly more Aotearoa New Zealand flavour). Mongrel Mob Portraits is an example of a show that profoundly highlights the distance between one group in society and another. Have those men seen their own portraits on these walls? If they were here with us, or their families were here with us, what would we say to them about their photographs? And what would they say to us?

I didn’t go to many art galleries when I was growing up. Possibly because Tauranga didn’t have a public art gallery until 2007. We didn’t go to galleries much, but we did go to the Filthy Few’s motorcycle and tattoo expo at the QEII centre down the road every year. The bikes were cool and the tattoos intricate and stuffed with symbols both familiar and strange. There was no gallery entrance to cross before viewing the exhibition and the leather-clad, long-haired men with tattoos over their hands and faces were quiet and impassive and didn’t stand guard at each exhibit ready to ask us to kindly not get too close to the art. Bikes and tattoos and a gym brought wildly different kinds of people and families together and the experience was safe and good.

This exhibition did not make me feel safe or good. I was reminded of Exhibit B by Brett Bailey, which I saw in Edinburgh last year. Both Bailey and Rotman’s work have been subject to controversy. In 2014 Gow Langsford received hate mail and media scrutiny when Mongrel Mob Portraits included Shano Rogue - who was at the time in court on a murder charge.  A few months later in London, Exhibit B was cancelled after 200 protesters gathered outside the Barbican on its opening night.

The comparison between Exhibit B and Mongrel Mob Portraits might seem inappropriate to some: Exhibit B, after all, is designed to make you eyeball (literally - the subjects do not take their eyes off you. You can either look back or away - both options are terrible) the ongoing injustices and physical and psychological damage caused by racism. And the effect is truly devastating - you’re transformed into a voyeur through an extremely fine execution of a series:

12 stages or tableaux vivants. In each, a performer physically characterises an objectified human being. Rather than portraying “the native in his natural surrounds” as human zoos did, each installation shows the brutality subjected upon asylum seekers in the EU or inflicted upon colonial subjects. (Brett Bailey, The Guardian, 24 September 2014)

Rotman’s work, on the other hand, uses photography to distance and de-contextualise. Gang members’ images cross a cultural threshold by being hung in a gallery, their daily lives stripped away so all we have left is the image of a person - their branded selves on show. The content is different, but both works draw heavily on the viewers’ own perceptions of the facts behind the representations in front of them. Both exhibitions ask you to look and look again. Both works also throw into question the gallery (or museum) spaces themselves: Bailey uses the medium of historical archive and education (museums and gallery spaces) to its full potential - his exhibitions truly do add up to a terrible account of the past and present. Rotman’s fine photography fits the fine white walls of the gallery but his subjects do not. Things are turned on their heads.

I think we must ask - who is this for? Both Mongrel Mob Protraits and Exhibit B are in cultural institutions for a reason. They challenge core audiences and scrutinise the very spaces they’re displayed within.

Back in City Gallery, Sean Wellington and Sons (2009) is the only image in the room that includes kids. A large man with a patch is carrying two young sons in his arms - they face us. Rotman has captured them frowning, red-cheeked. They’re wearing mob-branded clothing. All I want to think is just because a man is in a gang, doesn’t mean he isn’t a great father and his children won’t be kind people. 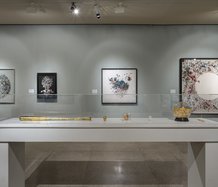 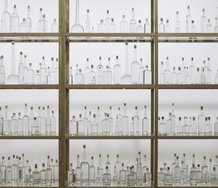