De Lautour and Best at Chambers 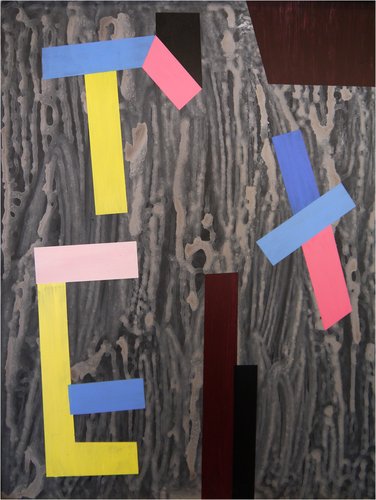 Sometimes De Lautour's allusions are overt, as in 'Exit Plan 1' (2015) where the artist takes the letters E-X-I-T as the forms to play with against a loosely Ab-Ex grey background reminiscent of liquefaction silt. In purely aesthetic terms the quake backstory is irrelevant to the paintings which could stand alone as aesthetic objects, but it does add a narrative which is perhaps more satisfying for those less interested in purely retinal pleasures - that play dumber than they are.

The show Domestic Abstractions at Chambers 241 gallery in Christchurch brings together recent work by well-known established painter Tony de Lautour and emerging photographer Holly Best, both Christchurch-based, together under a very loose theme of being “a reflection of Christchurch at this particular time with its references to plans, architecture, interiors and the suburban landscape” - ie. post-quake. It’s the sort of well-meaning, if vague, curatorial cant that stops up the plot holes with handwavium, but even if the reasoning isn’t terribly convincing, the works themselves are robust and intelligent.

De Lautour’s paintings continue their trajectory of playfully deconstructing the tropes of avant-garde modernism; the feints at cubism, the riffs on suprematism and constructivism. De Lautour’s geometric shapes in their deliberately, ever so slightly too sharp or too flat palette (to defuse the utopian spirit of the original movements, one suspects) allude to the stuff of real estate marketing: towers since demolished (a play, one suspects, on the artist’s surname), domestic interiors, sprawling patchworks of suburb and red zone, all hanging in an ambiguous and uncertain space much like the city itself.

Sometimes De Lautour’s allusions are overt, as in Exit Plan 1 (2015) where the artist takes the letters E-X-I-T as the forms to play with against a loosely Ab-Ex grey background reminiscent of liquefaction silt. In purely aesthetic terms the quake backstory is irrelevant to the paintings which could stand alone as aesthetic objects, but it does add a narrative which is perhaps more satisfying for those less interested in purely retinal pleasures - that play dumber than they are.

Best’s black and white photographs deal with the post-quake Christchurch environment in a way that is simultaneously both more literal and more romantic. The latter is enhanced by a predominantly soft focus that tends to flatten the images, creating a sense of aesthetic distance. At times the photographs threaten to be overwhelmed by their influences - the usual suspects like Aberhart, Westra, Pardington, Hipkins, not quite digested into the chyme - something that grouping them in a single row like a film strip does little to flatter. Individual works, however, stand out.

I find myself preferring the exterior shots of buildings and landscapes, because in these Best captures a wonderfully eerie quality. A riverine landscape of raupo and water under a leaden sky has a quietly terrifying, unheimlich quality I would normally associate with the cinematography of Ben Wheatley’s 2013 film A Field In England. Another river scene, with a man apparently retrieving something with a long stick (a model boat?), is strongly reminiscent of Ingrid Pollard’s 1988 series of photographs Pastoral Interlude. In another, windows stare mournfully out of an abandoned apartment block like eye sockets. A bird net billows spectrally around a fruit tree. Somewhere in the abandoned Red Zone is a Doc Ross-ish view over a broken fence to the defiant cabbage trees beyond.

In a wind-buffeted paddock, feeling a little like Bill Sutton’s Nor’wester in the Cemetery with its dancing poplars, sprinklers play on mechanically, oblivious as to whether there is a single human left alive on the planet - reminding one spookily of this passage from Ray Bradbury’s 1950 short story There Will Come Soft Rains:

“Ten-fifteen. The garden sprinklers whirled up in golden founts, filling the soft morning air with scatterings of brightness. The water pelted windowpanes, running down the charred west side where the house had been burned evenly free of its white paint. The entire west face of the house was black, save for five places. Here the silhouette in paint of a man mowing a lawn. Here, as in a photograph, a woman bent to pick flowers. Still farther over, their images burned on wood in one titanic instant, a small boy, hands flung into the air; higher up, the image of a thrown ball, and opposite him a girl, hands raised to catch a ball which never came down. The five spots of paint - the man, the woman, the children, the ball - remained. The rest was a thin charcoaled layer.”