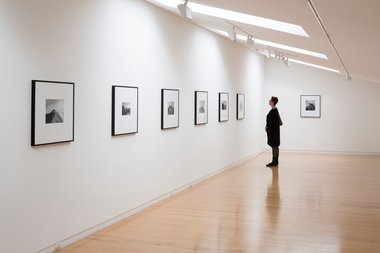 The similarities between Gilpin's prints and drawings and Clarke's photographs in 'Scenic Potential' are clear. A significant difference lies, however, in the construction of the picturesque. Gilpin sketched landscapes that were worthy of recording, in that they fulfilled his principles of what constituted the picturesque. Clarke, however, has created the picturesque from unremarkable landscape scenes by using contemporary photographic technology.

According to her Two Rooms bio, Clarke specialises in observational photography. However, this labelling becomes problematic when discussing Scenic Potential. In these eight black and white digital works, Clarke does indeed photograph what she observes. However, by the time the images make it to the viewer, they have been manipulated to challenge how we consider truth in relation to photography. Black and white photographs have connotations of accuracy and authenticity. Here, however, Clarke’s digital photographs contort our perceptions of reality. Clarke has photographed construction sites from around Berlin and developed ‘landscape compositions’ based on rearranging and manipulating the original photographs. The result is a compelling series of surreal ‘moonscapes’ that hover somewhere between fantasy and reality.

Clarke calls this series of work ‘studies of the post-industrial picturesque’. This refers to the legacy of William Gilpin, an 18th Century artist from whom the aesthetic concept of the ‘picturesque’ originated. Translated literally, picturesque means ‘fit to be made into a picture’. Gilpin developed a series of principles of the picturesque that were based on Romantic landscape painting.

The similarities between Gilpin’s prints and drawings and Clarke‘s photographs in Scenic Potential are clear. A significant difference lies, however, in the construction of the picturesque. Gilpin sketched landscapes that were worthy of recording, in that they fulfilled his principles of what constituted the picturesque. Clarke, however, has created the picturesque from unremarkable landscape scenes by using contemporary photographic technology. One can only imagine Gilpin’s reaction to the invention of photography with which the picturesque could be documented, manipulated or rendered with the click of a button.

While all works of the series present the picturesque with a level of intrigue, two works in particular stand out. The first, Landscape I, Berlin (2014) is filmic in its treatment of the landscape. Like a scene out of Planet of the Apes, the tyre tracks that lead to a pool of water are ominous and alien in this environment. The atmospheric perspective of the surrounding ‘mountains’ contributes to this sense of vastness. The overall greyness of the photograph works to locate the landscape out of this world, a place one can only visit in a movie or in one’s imagination.

In Peak II, Berlin (2014), Clarke’s skill as a photographer is evident. Clarke’s handling of light on the opposing sides of the peak transforms what was originally a pile of sand and dirt into a snow-capped mountain top. While on close inspection the true material makeup of the scene becomes apparent, overall the work demonstrates an understanding of simplicity of composition. The aforementioned ‘greyness’ is absent from this work and as a result Peak II stands out from the others in the series.

In terms of the history of modern photography, Clarke’s work pays homage to two significant eras in observational photography. Her treatment of light upon her mountainscapes is reminiscent of work of Ansel Adams, an American photographer famous for his black and white photographs of the Yosemite National Park in the 1940s.

Conceptually however, Clarke’s series maintains the efforts of a group of photographers of the 1970s who worked at highlighting the imprint of man on the American landscape. The New Topographics: Photographs of a Man-Altered Landscape was a 1975 exhibition and photographic movement of the same name. This exhibition at the International Museum of Photography in Rochester, New York focussed on photography that exhibited an ‘aesthetic of the banal’: photographs of an increasingly industrial and suburban American landscape.(1)  As demonstrated in the exhibition’s title, the underlying subtext of the photographs, by photographers such as Bernd and Hilla Becher, Nicholas Nixon, Frank Gohlke and Robert Adams, was the burgeoning of an environmental consciousness among contemporary artists.

While Clarke’s photographs mimic Adams in her treatment of the landscape, in theory her landscapes are ‘man-altered’ twice over: firstly in the process of building and construction in and around Berlin, and secondly in the process of digital photography. Clarke adopts the ethos of the New Topographics to examine how the landscape is altered and perceived, particularly in the development of the ‘picturesque’.

Impeccably framed and hung, Clarke’s works are striking in Two Rooms’ upstairs gallery space, holding their own next to the work of one of New Zealand’s most distinguished documentary photographers. I look forward to seeing what comes next from Clarke, who will be returning to New Zealand in September of this year to take up the Auckland Council Artist Residency in Waitawa Regional Park.

(1) Sean O’Hagan, ‘New Topographics: Photographs that find beauty in the banal.’ in The Guardian, February, 2010. 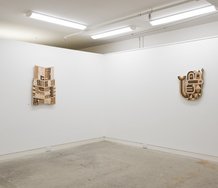 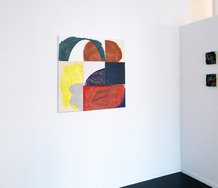