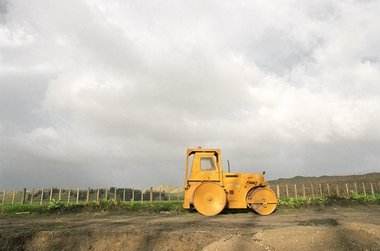 'Outer Space' has a slight problem with its inner space though. Two Rooms is predicated on the classic Modernist gallery white cube aesthetic, not just spatially but intellectually. The border-line fetishisation of the individual image probably goes back to Joe Duveen's Ministry of Marine gallery in New York in the 1920s where the entrepreneurial art dealer displayed a masterpiece on an easel in a velvet-hung room at the end of a succession of others, thereby creating a crescendo of expectation.

Group shows come in two sizes. There’s the XL off-the-hook garment where it’s the chance to exhibit threading the artists together, and where any “c” stands for camaraderie; and there’s the bespoke and tailored, trimmer M-size kind where the images have been stitched together by a practised hand, and where any “c” stands for curatorship. One’s a stab at participation: the other’s a commitment to professionalism. Does size matter? No, it’s the cut.

There’s a lot to see in Auckland at any one time, and even dedicated gallery-goers are hard pressed to keep up with what’s being shown within a couple of kilometres’ radius from Queen Street. Of course, for those in the know there’s a hierarchy of priorities based on perceptions of “importance” that actual practice and achievement have a hard time denting. The Papakura Art Gallery, for instance, has been running a really stimulating programme for a while, but it’s a long way from Queen Street, and not only geographically.

Newton’s not as far though, and Two Rooms has also been running an inventive programme for a while, an adventurous mix of artists and mediums, and often staging concurrent shows conveying more than the sum of their parts. In terms of photography and video it’s the place to go, rather than hanging around the vicinity of Kitchener Street waiting for something to happen. It’s really refreshing to see artists being exhibited not on the basis of reputation, and works shown not for their shock value. You don’t just have to suck on a can of coke to experience “the real thing”.

The kind of conversation allowed by an intelligently-conceived group show comes in two sizes as well. Firstly, the interaction amongst the works themselves; a community of themes and from the works’ very contiguity on the walls. Secondly, there’s the more literal conversation the first one generates among viewers. The only conversation the other type of group show can seed is based around desperation and confusion, a jumble sale of imagery where there’s little to buy. When there’s still much to be done bringing an informed audience to photography, their needs not those of the photographers, should be the driving factor in creating group exhibitions, and this crucial distinction is at the heart of Outer Space.

Photography’s elbowing its way into art world consciousness forty years ago was handicapped by its commitment to the documentary mode: this often gritty realism couldn’t have been further from the reigning high Modernist abstraction of the time, and made the “new” medium for the punters hard enough to chew let alone swallow. Since then, classic documentary with its strong social focus has evolved for a number of complex factors, among them the arrival of colour, generational change, and yes, the impact of art-world acceptance. In a very real sense, all photography is documentary photography, but the medium’s late recognition as art has involved the emergence of a genre known as “art photography”, a style illustrating such an eagerness for acceptance it’s in denial of its relatively humble origins and believes itself to be the child of a duke. By contrast, the new documentary sticks to the street, and while its aesthetic is much more temperate its ardour remains hot, the object of its concerns being less directly social than environmental, which of course has the widest possible social implications.

The six photographers in Outer Space, the curators say, “have one common theme: they have addressed the immediate environment”, and this indeed is the glue holding the show together, visually and conceptually. On paper this claim can seem pretty vague, but the specifics the images offer turn it into something concrete. And although it’s a relatively small show numerically - consisting of just twelve works (but including two triptychs) - the dots join up powerfully under the immediate environment’s auspices. And this is not only what a sharp group show can do, but it’s also why such exhibitions are really worth the bother: for the artists, for the dealers and for the audience.

All six photographers employ imagery having currency, both in terms of subject matter and photographic style: respectively banal and cool. Of course, “banal” is just someone’s description of something, but not so much a comment on what they’re seeing as an admission of the limitations of their own perception. And in the case of the images in Outer Space it’s their apparent ordinariness that invites a sharpening of seeing rather than an opportunity to confirm assumptions about what’s banal. Photography’s gifts include a redemption of the ordinary and a honing of seeing, to say nothing of the medium’s ability to use the shoe-horn of art to ease us into a slightly different relationship with the world.

There is currently much discussion around the current Walters Prize - some of it on this site - particularly around the work of Kalisolaite ‘Uhila, and to some extent Luke Willis Thompson. In a piece posted on 27th August Emma Jameson asks: “The status quo is challenged through the form and content of the nominations and this seems to have prompted the arts sphere to excitedly re-ask the question: maybe art can cause a revolution in societal perception and awareness?”, and “Have we rediscovered the essence of a truly revolutionary art form that is controversial in its ability to challenge, critique and provoke?”

Well, one could, wearily, call up the ghost of Tom Wolfe’s “radical chic” at this point, or even pay closer attention to Terrence Handscomb‘s wide-ranging and acute Walters Prize critique posted here on the 20th, but it seems apposite to observe that if these issues raised by Walters Prize nominees have pertinence, hasn’t photography’s documentary tradition been hammering away at them continuously for over a hundred years? If the art audience has somehow missed seeing this, then it’s doubtful if the scales will fall from their eyes because of an art prize lolly-scramble. An artist pretending to be homeless won’t cause a revolution: many more people opening their eyes just might.

Outer Space has a slight problem with its inner space though. Two Rooms is predicated on the classic Modernist gallery white cube aesthetic, not just spatially but intellectually. The border-line fetishisation of the individual image probably goes back to Joe Duveen’s Ministry of Marine gallery in New York in the 1920s where the entrepreneurial art dealer displayed a masterpiece on an easel in a velvet-hung room at the end of a succession of others, thereby creating a crescendo of expectation. Gallery goers these days generally expect to see individual works either so separated as not to impinge on their field of vision or at least positioned in tasteful groups. The former is Two Rooms’ signature style. But it’s not photography’s style. Given they’re more like forensic evidence than the end-of-trial judgement, photographs have an almost innate seriality, and their sense is more easily accessed in the company of others; not just other photographs in a group show such as this, but by other photographs by the same photographer. If making sense of the medium for a wider public is part of any gallery’s modus operandi then this recognition must register with gallery operators.

Those viewers not familiar with, say Greta Anderson’s, Caryline Boreham’s or even Mark Adams’ work might wonder what these image-makers have to offer. After all, the one on the wall might be a fluke. The Noah principle of two-by-two is useful here, the point being that singularity leads to sterility whereas pairing leads to conception - not a bad idea for someone looking to engage with an artist’s kaupapa.

A “contrast and compare” approach might have made this a more richly and productively curated exhibition, without bruising too much the sanctity of the white cube. The curation shows up more strongly in the actual selection of the six artists, one of the strongest, focused and most coherent contemporary groups of photographers seen in Auckland for perhaps up to twenty years, and it’s telling they appear in a back-street dealer gallery in Newton, not the most visible of locations. Concealed places happen to be Caryline Boreham’s field of endeavour too - the show’s label states that “Circus Tent continue’s Boreham’s fascination with documenting the concealed” - and it’s ironic that this group show, for all its intelligence and potential, is able to reveal little about the contexts of the photographers’ work and where it connects with the great documentary tradition, both of which would have undoubtedly illuminated viewer experience.
……………………………….
The work of two of the photographers in Outer Space - Conor Clarke and Sam Hartnett - is covered in an EyeContact piece by this writer, The Hand of Man, posted 21 June 2014.