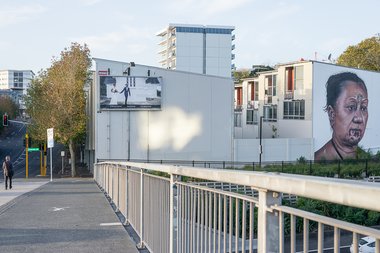 Curiously artists such as Simon Denny and Luke Willis Thompson are posited as the golden boys of New Zealand art for work that owes more to the tradition of social documentary photography—having its origins as far back as the 1880s and continuous since—than any ‘ism' the art world can dredge up. Why are these dots not being joined? Could it be that, in some circumstances, an art history degree becomes an impediment to seeing and thinking? On the evidence there is ample reason to believe so.

The late, great Sir Dove Meyer-Robinson, when visionary mayor of Auckland in the 1960s and ‘70s, once remarked that the rapidly-burgeoning town was really a collection of suburbs in search of a city (1), and it still remains largely the case that the natives identify themselves as coming from Remuera, Onehunga, Takapuna or Te Atau rather than ‘Auckland’. This identity problem is complicated by an increasing perception south of the Bombay Hills among planners, politicians and the general populace that ‘Auckland’ means ‘trouble’, an urban black hole sucking up national resources faster than the speed of light, with on-the-back-foot solutions hurled at the problems with more hope than assurance of success.

At its margins development is horizontal, at the centre, vertical; this latter supporting any claim for Auckland being New Zealand’s only truly international city. The Lonely Planet Guide may have described Wellington as “The coolest little Capital in the world” but it just can’t compete with its northern sister in sheer, visual impact. Not even the most loyal, enthusiastic Wellingtonian would ever describe their town as “the beginner’s guide to Sydney” (maybe, on a good day, Adelaide) but for Aucklanders this is a plausible description.

Think ‘Auckland’ and images of tall buildings and traffic streaming across the Harbour Bridge come up on your mental screen, not Tamaki Inlet mangroves or vineyards on the outskirts of Henderson. The anthill of the CBD is pretty much what ‘Auckland’ means, and it’s the site or within sight of Mary Macpherson’s photographs in The Long View, 25 images made over a period of four years spanning 2014 to 2017 (2).

Put somewhat simplistically, Macpherson’s work has long traced the sometimes elusive border between nature and culture, from her Tilting at Nature work of the later 1980s to her Bent series (3) of 2014. But in The Long View she comes out almost exclusively on the side of culture, albeit in the urban form of a gawky adolescent male; all arms, legs, lust and acne. Her imagery depicts the messy and restless details of a huge ‘work in progress’—the symbol for which is the iconic, ubiquitous orange plastic cone—but to this organic disorder she brings a practised, amused and often amusing eye, not only freezing telling moments but through the conventions of the frame imposing a degree of order which becomes a portal for contemplation and reflection.

Much ‘street photography’ because of its origins in the social documentary tradition tends to make the human content and its relationship to the urban space the ostensible subject of the imagery—here, Peter Black is the master of this, as John Daley was in the 1960s and ‘70s—but for Macpherson human figures are just another element in the streetscape; again, we return to the metaphor of the anthill. But there’s nothing heartless in her approach.

Look at No. 23, Upper Queen Street, the image of a fairly bland city-scape. In it she almost returns to her nature/culture dichotomy with an actual person walking along on the far left, and, nearer the centre, high on a wall is a sign advertising a firm’s connection with weddings, illustrating a happy hetero couple on ‘the day’. To the far right there’s a large mural depicting a wahine wearing the moko kauae, the only hint the image probably derives from New Zealand. Apart from that it could be in anywhere in the world, even, say, Canada. Oh, at the intersection in the middle distance there’s a street sign indicating a Canada Street. Such are the surprising subtleties of Macpherson’s imagery.

The following image, Waterfront, depicts a newish exhibition building down on the wharf, but commanding attention in the foreground is a large concrete barrier, the top of which is cone-shaped and painted a bright emerald green. To the right there’s a covered stairway descending from the building, in the shelter of which at ground level stands a suited man doing a deal on a phone. This image displays not only Macpherson’s formal expertise but her instinctive knack for making the human element serve as a kind of visual punctuation.

Take No. 3, Looking from Nelson St, depicting an elevated view of another globally typical commercial area city-scape, pretty much wall-to-wall grey and beige, but in the middle distance there’s the flat top of what’s probably an apartment building with part of a swimming pool visible, adding a bright blue accent. Next to it is the tiny figure of a man exercising with weights, an ant with health concerns and, possibly, body-image ambitions.

Macpherson’s humanising poetry is in the juxtapositions: the old and the new—with the transitions between—the shabby and the chic, the bland and the fascinating, the dreary and the colourful, the images peppered with a cacophony of signs urging, tempting and directing. The photographs themselves are signs too, made a step back and giving a cooler view, crafted evidence of Auckland’s energy and chaos, signs that point the way we’re all heading.

The art world’s gate-keepers took a while to latch on to the photographic medium, a reluctance (if not actually resistance) which lasted well into the 1980s in some quarters (4). It’s curious that aspects of the documentary tradition—considered by some insiders as one of the glories of the medium—are still regarded as not being ‘arty enough’ to grace the halls of their institutions, opting instead for the apeing of traditional art models and images distinguished most by the depth of their concepts; there because such things align more closely to prevailing views of art than revealing much knowledge about what the photographic medium ipso facto has to offer. Street photography is the hapless victim of this narrow, unthinking attitude.

It’s all the more curious at a time when artists such as Simon Denny and Luke Willis Thompson are posited as the golden boys of New Zealand art for work that owes more to the tradition of social documentary photography—having its origins as far back as the 1880s and continuous since—than any ‘ism’ the art world can dredge up (5). Why are these dots not being joined? Could it be that, in some circumstances, an art history degree becomes an impediment to seeing and thinking? On the evidence there is ample reason to believe so.

The street is where we lead our public lives and the urban environment is where most of us live. This is an age of growing corporate domination and widespread surveillance, where developing an acute awareness of our surroundings becomes a political act of defiance. This is the milieu of street photography. Art history is, among other things, a chronicle of human beings’ relationship to their society, not just their relationship with art’s aspirations. Mary Macpherson’s innocent-seeming images are a reminder of this vital connection. The man on the wharf is still on the phone.

(1) A political joke-book in the ‘70s featured a photograph of him as a speaker, gesturing dramatically, the caption being “Don’t move to Auckland - Auckland is moving to you.”

(2) The exhibition is accompanied by a fully illustrated, 42-page book also titled The Long View, with a six-page essay by Gregory O’Brien. Superbly designed by Katrina Duncan it also constitutes #89 of the ongoing publication PhotoForum.

(3) Covered by this writer on this site in Wellington’s Festival of Photography, 14 March 2014.

(4) In 1982 when the former National Art Gallery was offering their Views/Exposures photographic show for national tour, the director received a letter from Austin Davies, director of Nelson’s Suter Gallery, exclaiming with some force and heat that photography could never be art and would cross the Suter’s threshold only over his dead body.