The Clay Artistry of Wi Taepa 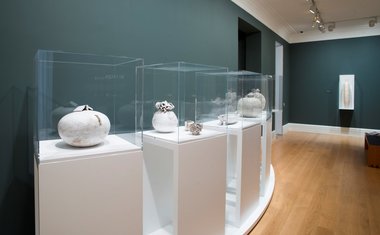 The choice of the word ‘clay,' and not ‘ceramic', is deliberate, and has spiritual intent. It showcases the genealogy of the practice as being connected to earth, that along with other types of rock and stone, has a whakapapa leading directly back to the primordial union (then separation) of Rangi and Papa—particularly to Papa (the earth mother). Taepa's use of clay, and the discussion he brings to it in terms of genealogy, makes him a sort of conceptual artist. Idea and material are inseparable.

Apart from the occasional production of musical instruments like nose flutes, the making and firing of clay artworks is pretty well unknown in Māori arts and crafts traditions, though its emergence is connected with the prehistoric Lapita pottery tradition that started in SE Asia and passed through New Caledonoa, Melanesia, Central and Eastern Pacific to reach Samoa and Tonga by approximately 1000 BC, where it then ceased.

Wi Taepa is a pioneer in this field—he and his colleagues Baye Riddell, Manos Nathan, Paeru Corneal and Colleen Waata Urlich, founded the clayworker collective, Ngā Kaihanga Uku, in 1986—and this is a survey of his practice for over thirty years, starting from when he was mentored by ceramicist George Kojis in 1992. An earlier iteration of Retrospective was presented at Pātaka Art + Museum in 2016.

The focus is on Taepa (Ngāti Whakaue, Te Arawa, Te Āti Awa) because he is renowned as a teacher (initially of wood, bone and stone carving), mentor and practitioner, one widely admired for the sculptural and graphic qualities of his clayware, and his love of innovative form and subtle new ways of decorating the outer and inner surfaces. With the slab, coil and pinch pots that he specialises in—and other handmade clay constructions—he often rakes the outer sides with a comb-like card to create very fine zigzagging lines (or delicate cross hatchings), or draws more pronounced incisions (with raised lines) to make koru shapes or parallel lines that hint of carparks (or urban planning) that he then colours with chromatically hot, ochrey pigments. Others have scratchy pictographs, like the types that influenced modernists like Paul Klee. Naturally, patterning motifs from whakairo rākau (wood carving) and kōwhaiwhai (painted panels) are also conspicuously present.

The choice of the word ‘clay,’ and not ‘ceramic’, is deliberate, and has spiritual intent. It showcases the genealogy of the practice as being connected to earth, that along with other types of rock and stone, has a whakapapa leading directly back to the primordial union (then separation) of Rangi and Papa—particularly to Papa (the earth mother). There is a chart available in the superb published catalogue that contains three wonderfully informative essays by Elizabeth Ellis, Nigel Borell and (Pātaka director) Reuben Friend—each text covering a separate aspect of Taepa‘s practice. Taepa’s use of clay, and the discussion he brings to it in terms of genealogy, makes him a sort of conceptual artist. Idea and material are inseparable.

One series, Kauhuri Cultivation (1994) has pots that look like leather bags bulging with small rounded rocks. The sides look thin and elastic, and in series speak of a creation myth where eventually little ancestors grow to burst out of the sides. Another in this series, Parautanga Plough (2005), hints at the colonial confrontations and heroic non- violent resistance of Taranaki, with the clod crushing plough that also alludes to eel traps. Taepa not only has a facility for inventive drawing and mark/texture making, but also an enthusiasm for witty trope and metaphor.

In another series, Mahere Mapping (2011)—featuring incised raised lines—Taepa was inspired by Robert Ellis’ Motorways paintings with their interest in aerial photography, meandering highways, road markings, and city maps. His restless sense of curiosity drives him to explore new and more complex ways of vessel construction and with that, surface embellishment that is rich in allusion and cultural / historic references. The work is unusually subtle, demanding close scrutiny, coming from a particularly thoughtful individual who is the son of an Anglican minister, and who has worked in all sorts of extreme situations, from Vietnam soldier to prison officer. His career trajectory in art production and pedagogy counters many superficial preconceptions.

Apparently this is the first ceramic show to be held in Auckland Art Gallery Toi o Tamaki. That is hard to believe, but if it is so, this retrospective is a wonderful way to start. It is not a big show, but nevertheless, it has great impact, being full of witty surprises, possibly being seen as a drawing exhibition as much as a demonstration of claywork that espouses religious ideas. Absolutely essential viewing.