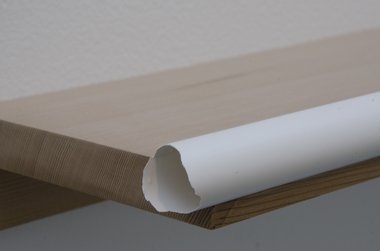 Conversely, here is an image of crafted beauty, a visible manifestation of delicacy, almost frail, exquisitely balanced, at the point of extremity, yet inviting touch which might cause destruction, the sound of which is delectable. It's the kind of conundrum that contemporary pundits salivate over, embodying as it does the essence of all that's equivocal and ambivalent.

This is not the Walters. This is not selection by committee, which itself has been carefully selected, tightly controlled and politically massaged. No. This is the National Contemporary Art Award in Hamilton, on at the Waikato Museum, formerly known as The Waikato Museum of Art and History. And the work selected here have been chosen blind, presented to the curator and judge, Simon Rees, Director of the Govett Brewster, as anonymous; which is as it should be in the cause of transparency and overall fairness in a claustrophobic art world that’s as small and incestuous as a Cooperite cult.

Given such judicious parameters, selection can throw up some interesting surprises and this year the surprise was the fact that a larger proportion of works selected were by female artists. A woman won and women won out in the cull.

I have heard that artists who enter these things do a little homework on the judge, check up on his or her predilections. If they’d done so on Rees, they’d have discovered that while overseas he was working in a gallery that was sympathetic to the crossover between fine and applied arts. Some of that is reflected in the show and is mentioned by the judge himself in his remarks where he comments on “a pleasing…attention to craft”, among a list of other considerations.

The artist who won, Deanna Dowling, from Wellington, certainly displayed that. Her Tell Someone if Something Happens, is elegantly crafted, or was until some cretin touched the judiciously balanced ‘fluorescent light tube’ (in fact a hollow plastic tube) that sat precariously on a finely wooden honed ledge. The tube crashed to the floor, breaking into a multitude of white porcelain slithers. It demonstrated the notion of fragility and gravity the artist was toying with… but.

However in reading the blurb Dowling wrote, she seems to almost goad the viewer into doing just that - touch it. After talking about the unnerving tension locked up in an object so brittle, and testing the limits of balance against the insubstantial nature of the thing by placing the tube on a knife edge, she mentions how satisfying the sound of the breaking tube is, and says, “Go on, I dare you. The sound is better than glass”. So someone did.

If this is just a matter of playing with or challenging museum protocols, (look but don’t touch), then it’s just prankish and disappointing, like John Cleese claiming a first by saying “fuck” at Graham Chapman’s funeral, like a naughty boy.

Conversely, here is an image of crafted beauty, a visible manifestation of delicacy, almost frail, exquisitely balanced, at the point of extremity, yet inviting touch which might cause destruction, the sound of which is delectable. It’s the kind of conundrum that contemporary pundits salivate over, embodying as it does the essence of all that’s equivocal and ambivalent.

It resembles several others in the show, one by Karl Bayly who also employed a fluorescent tube, and a work called, Analysis of a complex system, by Karyn Taylor which exemplified similar notions of tenuousness and instability both in the physical materials used and the use of a light show that projected onto the work, becoming part of it - an exquisite kinetic piece playing with the idea of quantum physics.

The show also attracted several ceramic entries, of which Hamilton’s Elsa Lye received a merit award. Her piece, The Cardinals, had to do with events surrounding the election of a new Pope, and Habitat which touched on the Christchurch earthquake. Both involved the spontaneous organic process accompanied in the firing that again was concerned with the experience of fragility.

Other ceramic pieces were Raoul, by Virginia Leonard, Going fucking forward, by Paul Maseyk and Pretty boys, by Madeleine Child. Two other works had a ceramic feel - Kate Hill’s Journey baskets, and Form over function, by Mia Hamilton, which consisted of bottles constructed from finely knitted wool.

Of the photographic entries Queen Elizabeth 11- Howick RSA, by Caryline Boreham, was particularly poignant, funny and political, in an understated way, depicting, in simply documentary fashion, a withered, washout realm that once ruled the waves, the lives and values of people in New Zealand. She explores in her work the hidden yet familiar world of institutional spaces that possess lingering traces of royalty, which in this case involved a somewhat bleached picture of a youngish looking Queen Elizabeth that has been relegated to a basement overlooking a stack of collapsible tables and a broken chair. As Boreham describes it, “faded markers to colonialism and the monarchy.”

Of the 52 works in total, only half a dozen were paintings all of which demonstrated texture. The piece that did so to the nth degree and in the most unorthodox manner was a work by Emilie Truscott who’d collected large thick chunks of dry acrylic paint and assembled them inside a small frame which saw them positioned like sediment at the bottom of the ‘picture’, held in place behind glass.

The use of cellophane bags was also in evidence, operating as a kind of mock glass in the work of Tao Wells and Anna Maxwell. Well’s McCan’t, a direct reference to McCahon, incorporated a large cheap frame covered in an Air New Zealand plastic bag splashed with white paint and inscribed with the word ON, reading NO on the reverse inside. Priced at $95,000, this protest piece matched the artist’s student loan, plus the 46% gallery commission.

The other ‘plastic’ work, using a similar bag by Maxwell, explores the notion of permanence and temporality where random splashes of impasto paint across a readymade image became sort of vacuum-packed and sealed for ‘eternity’ inside their container.

Both works employed expressive paint use as did the dribbled Weeping Woman by Greg Chaston, and a kind of Philip Guston doppelganger called Lonbat by Michael Prosee. Nell Nutsford’s abstract, Cerulean, aqua, gold, harked back to Monet and surface exploration.

Of the sculptures, Kirsty Lillico’s cut up salvaged carpet that hung off the gallery wall, impressed. Entitled Machine for living, it borrowed Le Corbusier’s slogan and wittily engaged with ironies at several levels to do with the legacy of modernism. A similar preoccupation with the bequest of the modern was found in a work by Natalie Guy. Called Form for interior, it presented a domestic Hepworth look-alike, made from an old ply school chair, an objet d’art that deliberately recalled a style and taste from the modern era made consumable for the contemporary home.

The evocation of a period is also captured by Paul V Johnston in his beautifully crafted sculptural mantelpiece works constructed from book covers that hail from the years 1916, 1968 and 1983 respectively.

It was pleasing to see the inclusion of drawing in the show. The work of Frances Hansen’s mixed media piece demonstrated bold and experimental use of line, form and colour collage.

Of the print/photographic work, Lost Lines #2 by Ina Johann displayed a new variation on abstraction to convey a mapped sense of loss experienced by the immigrant.

In sum, there are enough works in the show to suggest a sensibility that reflected what one artist, Larissa Goodwin, demonstrated directly in her piece, Pivot Support. Her tilted window frame, perilously supporting pieces of abstract clay formations and copper wire, bore witness to her “interest in the space where aesthetic and function meet, or rather where we may surrender function in order to make room for the matters of visual curiosities.”

The show is full of such ‘visual curiosities’, some of which glance over the shoulder toward function. This makes for a stimulating, perhaps even game changing, aesthetic encounter.