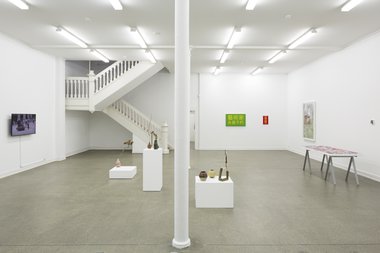 The curatorial notion of ‘Asian-ness’ in the exhibition is slightly oblique because China is clearly the dominant geographical presence in the gallery in terms of artist origins, subject matter, written language or historical genres – despite one of the artists being Korean and one work being focussed on Japanese culture - and despite the term ‘Asia’ also incorporating India, S. E. Asia and most of the Middle East, areas with no artistic presence here.

This collection of work by Starkwhite artists is focussed on celebrating not only the importance of Asian culture both globally and nationally, but as it has been emerging in Auckland. The curatorial notion of ‘Asian-ness’ in the exhibition, though accurate, is slightly oblique because China is clearly the dominant geographical presence in the gallery in terms of artist origins, subject matter, written language or historical genres. This is despite one of the artists being Korean and one work being focussed on Japanese culture, and despite the term ‘Asia’ also incorporating India, S. E. Asia and most of the Middle East, areas with no artistic presence here.

It’s a fascinatingly mixed selection for sure. Jin Jiangbo has two photographs where dramatic landscape shots of New Zealand bush have been digitally modified to that they have acquired aesthetic qualities associated with Chinese scroll drawings, and also tapestry or macrame. These witty images were displayed at Starkwhite three years ago but it is interesting to see them now recontextualised in this group show.

Trenton Garratt’s blue image of a winding river with steep gorges and reflections of clouds has a Doris Lusk and Rita Angus feel to it, with razor sharp peaks and austere but fuzzy slopes. Stylistically it could be part of China even though its title refers to Piopio, the township near Te Kuiti. The bend in Garratt’s river mimics the river bend in another blue landscape that is adjacent, Wang Dewei’s meandering river (with islands) made negatively with small brushmarks cleverly clustered like leaves around the bank’s shrubs and trees.

Chinese lettering figures prominently in this exhibition. Billy Apple®presents two paintings (prints on canvas) where angular, spiky and diagonal Chinese pictographs (Mandarin serrifed) address nonEuropean readers. One declares ‘The artist will live forever‘. It is a droll pun on the popular perception of ‘immortal’ artworks, as well as a reference to Apple®’s donation of his own cells to science so they can be continually multiplied for future research. Next to it is another striking canvas, a vertical rectangle, ‘From the Lai Soo Collection‘.

John Reynolds creates a street stall ambience with a table displaying a 7 x 15 grid of small 100 x 100 mm block paintings. The images are improvised riffs based loosely on Mandarin pictograms, written by brush (literally) on top of each other (not adjacent in vertical columns), with different (raw) dry brush backgrounds. One work from the 105 canvases is taken off the table and displayed in isolation on the wall; passing visitors are encouraged to change it.

Stella Brennan presents three plinths of sculpture incorporating Ikebana (Japanese flower arranging) and Kintsugi where broken pots are mended using another Japanese tradition involving coloured lacquer and gold leaf on long leafy twigs. The plinths are different heights and use different types of repaired vases and coloured ‘mortars’, and striking arrangements of cantilevered botanical vectors. I find the highlighted glued pot cracks quite extraordinary, a cultivated smaller companion echoing Duchamp’s Last Glass. With the wild (sometimes angular) variations in vase type, the evident histories of smashed ceramics and their repair, and the skinny branches being a type of drawn line extended in space, this three part arrangement of ceramic clusters effortessly holds your attention.

The two videos in this show make important contributions too. Night Bar, Jim Speers’ little movie of long barges slowly navigating their way at night through what seems to be the Huangpo River in Shanghai, deals with the murky dark tones of low illumination, except when the measured purple (polluted?) half-light of dawn and dusk is encroaching or fading. It presents an atmospheric and mesmerising view of nocturnal life that is rarely thought about when local working people are sleeping.

Yuk King Tan’s video of Hong Kong streetlife is related. It shows a labourer who makes a living by ‘scavenging’ discarded packaging cardboard and transporting it to depots where it is then recycled. These street people are normally ‘invisible.’ For this project Tan has pointedly built an Imperial Lion (symbol of the British Empire) out of layered waste card and placed it on a trolley. The woman is pushing it across the city to a collection station.

A severe contrast to the lion is Seung Yul Oh’s pair of immaculate fibreglass penguins over by the window. This glossy white avian contribution tends to be a symbol for the environment and eco global welfare, and has a bit of personality that advances beyond cuteness. Like with Brennan, the (‘non-Chinese’) sculpture in this show can’t be underestimated. A fulfilling and cleverly interlinked exhibition.