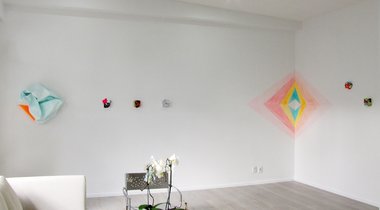 Smallness of scale and ‘muscularity' are of course old (‘gender'-related) issues now, often having connections with craft by way of ceramic sculpture (Picasso) or small painting (Bambury) that looks like jewellery in looking wearable. Parkes' paintings not only look like confectionary but they could be broaches - albeit a little bulky.

This exhibition by Christchurch artist Miranda Parkes continues the exploration of (and now accentuates) the decorative motifs readily apparent in her collapsed and puffed canvases that she has become well known for. Of the thirteen works, eight are based on 100 x 100 mm square forms where viscously thick paint (acrylic, oil and enamel) is applied to raw wood, one is bigger (200 x 200 mm), there is also a wall drawing with diluted acrylic applied directly onto walls converging in a corner, another is a large decorative framed painting on rag paper, and the remaining two are large billowing patterned ‘puff’ canvases on stretchers.

These varied works are shrewdly hung in an open plan lounge with kitchenette (in Godkin’s gallery/home), spaced apart along the walls in irregular intervals with the bigger works inserted into the line of smaller items.

Parkes’ small works are glossy and reflective. They look like little glistening cakes or chocolates where an icing decorator has run amok with gleeful improvisation; or wonky partially wrapped Christmas parcels where their sculptural contents have melted and seeped out over the walls. Though basically highly patterned squares they project out at strange angles, with unpredictable textures, multiple dotty geometries, distended shell or concave horn forms, and strange stringy protuberances. They seem to allude (in miniature) to Frank Stella (several stages of his extraordinarily fecund career), Lucas Samaras, Howard Hodgkin and Elizabeth Murray - with their unabashed delight in cacophonous ornamentation.

These small canvasless works by Parkes are related to the also brilliant paintings of Auckland artist Glen Snow, except his are bigger, much more restrained, and incorporate removed and repositioned slivers of plywood. Both are contemplative and sensual, but his work is cooler, matte, and more classical, while hers is wildly frenetic, wilfully ‘excessive’.

In either case, one wonders if the domestic-scaled paintings might be more effective (ie. more muscular, with more presence) if bigger and ‘gruntier’. However it is important to remember that (and this is my point in including Snow in this discussion) with these artists size is dictated by their innovative and obsessive exploration of certain materials, and limited by their properties as workable substance. Their work is so sensual you are compelled to come right in close, but the particular qualities of that sensuality are dictated by processes bound to manipulated physical ingredients. That’s what brings the intensity.

Smallness of scale and ‘muscularity’ are of course old (‘gender’-related) issues now, often having connections with craft by way of ceramic sculpture (Picasso) or small painting (Bambury) that looks like jewellery in looking wearable. Parkes’ paintings may look like confectionary but they could also be broaches - albeit a little bulky.

However white walls are what really helps them crank up their allure. Being static (and not on moving clothing) you can really ponder Parkes‘ exuberant forms, inventive colour combinations and seductively complex layering of shape and pattern. They’re great fun and quite addictive, as you look at them from different angles. Paint and wood and white walls, all in synthesis together.