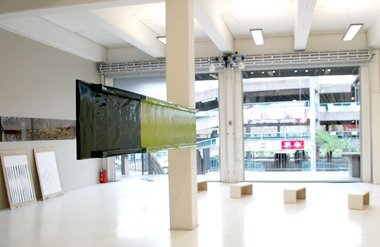 The décor and idiosyncratic properties of the showroom dominated the space, but the work often subtly acquiesced to the given in situ colours and textures rather than attempting to resist. The emphasis was on research and experimental process - rather than individual visual resolution - though as a group, the installed works looked very considered.

Group show
The Other Place

This unusual show in a new gallery in Freeman’s Bay allowed eight recent Elam graduates to recontextualise their usual endeavours within a new architectural setting, permitting some qualities or aspects to be absorbed by the background and others to be highlighted. The décor and idiosyncratic properties of the showroom (next to Caffetteria Allpress ) dominated the space, but the work often subtly acquiesced to the given in situ colours and textures rather than attempting to resist. The emphasis was on research and experimental process, rather than individual visual resolution, though as a group, the installed works looked very considered.

Oleg Polounine’s series of six plywood and plaster ‘boxes’ looked like hollow steps that only traversed horizontally without ascending. Unlike say Judd, these enigmatic units were not identical, each module having plaster smeared on irregularly with a palette knife. Mysteriously the sculptural line seemed to hover just above the white floor, the result of a thin unseen strip added onto the flat bottom edges.

Glen Snow’s delicate small plywood paintings were similar in that they also blended into the colours of the background wall veneer or painted concrete. Using a narrow router (like DJ Simpson) Snow had gouged channels into the plywood surface, filling in the holes with Builder’s Fill or transparent sealant, inventively picking off sliced through layers and nailing on other thin surfaces (a la Rohan Wealleans). Though these were final works their diminutive scale made them look almost like large broaches, or mock-ups for bigger paintings. His splintery splitting squares were intriguing and distinctive but there was a tweeness and domesticity that stopped them from being utterly compelling. They could be gruntier.

Unlike Snow’s works which you could hide inside your coat, the improvised sculpture/drawing/painting by Karyn Taylor was not portable. It blended aspects of Rockburne, Sandback and Albers into a floor painting that extended angular planes and lines using suspended string, thin whitewash and flickering graphite. You had to look closely to distinguish Taylor’s implied edges from the other evanescent traces embedded in the space but it fitted into the room well, and was a good foil for Ian Peter Weston’s nearby Main Spar, an imposing horizontal ‘girder’ made of paper and green enamel paint. This - positioned at eye height in the middle of the room - referenced the frail construction of a Lancaster bomber and, with its abrupt black/green divisions, modernist abstraction.

Natalie Guy’s sculpture consisted of six linear units leaning against the wall: mysterious ‘poles’ made of connected sections of found objects such as carved or lathed wood, brass rods and cork cones. This portable sculpture had overtones of bedsteads, reading lamps, and table mats, added to an amusingly garish vulgarity. Perhaps here they were too inert and might work better when carried, when linked to living chatting persons who are holding them - functioning as extensions of mobile human bodies.

Shannon Novak’s framed ink drawing on paper was more than just that particular convention, though on that one level it was visually pleasing. The intricate, small P-shaped image in the centre became transformed with a smart phone (or tablet) bearing the app Aurasma - and the artist’s website - so that when in camera view, a more complete image appeared.

Diane Scott’s painting on aluminium had a more effective size than Glen Snow’s work, but not the instinctive flair for effective composition where the parts cumulatively made a convincing unity. She mixed Snow’s interest in texture with Karyn Taylor’s preoccupation with linear vectors and angular planes, but somehow her reflective individual elements seemed isolated and disparate - depending on the angle of view.

Andre Sampson’s water colour patterns were not so much completed artworks as tests, experimenting with negative space and overlapping stencilled tones (white, black, grey). Two sheets were presented taped onto leaning plywood sheets, with a dozen vertical lines on each. On the top and bottom extremes the darker dots were kept separate but in the middle they formed pale lumpy negative lines. A bit like Lichtenstein’s ben day dots meeting Monet’s light on water, but much rougher and more tentative. Testing the possibilities.

Though clearly a collaborative project in its organisation, overall it might be argued that the more ‘material’ works worked better than the nuanced in the space. Oleg Polounine’s and Ian Peter Weston’s contributions were far less subtle optically than, for example, the more restrained work of Snow, Scott or Taylor, but their spatial decisiveness (especially in their interaction with the columns) and lack of complexity perhaps won the day, creating impact that can be remembered.