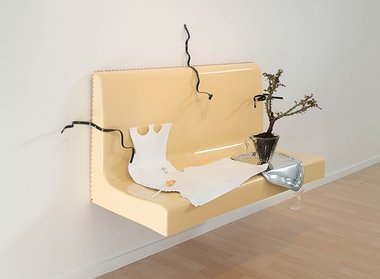 Now you could treat this installation as a complicated rebus, and pour over the three sources, eagerly devouring all references to Gumble, Milligan and Hemmingway, and methodically ‘decoding' Enberg's esoteric labours. The exhibition is sufficiently enticing that if you lived near the gallery, you might want to make several visits while Googling references in front of your home video screen.

Here in the Wynyard Quarter premises of Gloria Knight, Oscar Enberg presents us with an installation that seems at first glance to be a nod to some of Julian Dashper’s ‘painter’ drumkit or watch titles (like The Hoteres or Anguses), manifested as a new streamable television series celebrating the family of Thomas Pynchon, the renowned American novelist. Enberg’s eight sculptures collectively make up a fascinating amalgam of buckled forms linked to three main pop culture references: a short story, Pynchon’s Entropy, and two television series, The Simpsons and The John Larroquette Show.

To construct this exhibition Enberg has focussed on the activities of three fictitious characters: Barney Gumble from The Simpsons, Meatball Mulligan from Entropy, and John Hemingway from The John Larroquette Show. The over-arching theme that connects them is that of alcohol: its power in American society - and for these individuals - its reckless consumption or necessary avoidance.

The signs of this preoccupation with imbibing are everywhere: distorted glass tankards and bottles on the floor; crushed copper Toby jugs and nailed up pewter mugs; a golden sommelier tasting spoon on a seat, semi-abstract sculpture that vaguely alludes to staggering or paralytic figures; drawings that reference (in storyboard form, cutout ‘cardboard’ sheets or etched lines on a door) scenes from Larroquette’s or The Simpsons’ television series that include beer mugs.

If you are like me and know very little about American television from the last three decades, it is obvious this installation is aimed at a specialised online/television audience, one that is highly literate as well. Entropy is a very early Pynchon short story. Callisto, Mulligan and Aubade are characters from this story that are mentioned in the works’ titles, and various clarinet, trumpet, saxophone and trombone mouthparts set into the wall in isolation allude to it.

Now you could treat this installation as a complicated rebus, and pour over the three sources, eagerly devouring all references to Gumble, Milligan and Hemmingway, and methodically ‘decoding’ Enberg’s esoteric labours. The exhibition is sufficiently enticing that if you lived near the gallery, you might want to make several visits while Googling references in front of your home computer or video screen. It is a conceptual combination of a Rubrik Cube and a cryptic crossword, where you need the answers to clues to be able to twist the pieces. Every component within the sculptures is apparently there for a reason, so deciphering the detail would take some time.

Or you can ignore all that - forgetting all alluded to comedic narratives - and just enjoy the work for its formal invention, a 3D Pop Art installation that is highly pleasurable for its manipulation of shape, line and colour, that also generates associations through rich juxtapositions of subject matter.

The question remains of course, is art meant to be a puzzle, where the gallery visitor becomes a detective scrutinizing the scene of a crime, following a sort of treasure trail or orienteering system of clues - with specific (hitherto hidden) information pertaining to exhibited physical objects as a goal? Is art really about deduction?

I also get suspicious of art that is over complicated. I tend to think the value of research (best as play, not work!) and factual layering in art practice is overrated, that good art exploits simplicity not complexity, and that instead of accumulated information, emotional resonances that stick in the mind - through beauty, mystery, humour or poetic layering - are what count. These are accentuated by the way the conceptual and physical elements are put together.

Enberg’s show is intriguing visually, and without the narrative underpinnings that make him say, the television/literature equivalent of conceptual photographer Taryn Simon in terms of clear purpose, the installation would still draw you in - even if on a level of spontaneous whimsy or chaos. It sparks off your curiosity even if logic and conventional causality (in the form of artist intention) happened to be absent.

Also the sculpture - with its three referred to, overlapping, works of literature and television scripts - has something of the ‘moving atoms’ that an artist like Simon Starling specialises in, when he transforms an Eames chair literally into a Sausalito bicycle, or another Sausalito bicycle literally into an Eames chair. With Starling we are examining physical transmutations, transformations you can touch or feel, but with Enberg the result is sculpture that references mental pictures and images quoted online - assorted components from within different American writings or screened productions - drawing them in and mixing them up in an entertaining fashion in Auckland.

Worth checking out, this exhibition is both challenging and beguiling. Another excellent Gloria Knight production.

Some readers might be interested in this informative article on Pynchon, especially the eleventh paragraph from the end. It reveals ...

Some readers might be interested in this informative article on Pynchon, especially the eleventh paragraph from the end. It reveals how tenacious Enberg is as a researcher.
http://www.vulture.com/2013/08/thomas-pynchon-bleeding-edge.html