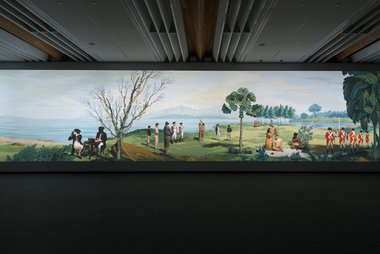 The twenty-five metre long (and four metre high) wall is a screen for a continually moving scroll, drifting from right to left with no fixed centre, but like a sequence of comic frames (with no edges) where certain characters reappear in different juxtaposed scenes. Within the sea vistas, rolling downs and lush vegetation of Charvet's coastal landscape (a utopian version of Tahiti), Reihana sets out her vignettes in spatially orchestrated sites of foreground, middleground and long distance.

In this eagerly anticipated, but not hyped up, narrative packed panorama by Lisa Reihana (it is as good as the advance publicity claimed), its loop of thirty-two minutes duration holds its audience enthralled, being the very best kind of spectacle. Not only is this seamlessly blended array of five video projections sensual - with its sweeping landscape, figure groupings, body movement, leafy textures and dramatic music - but it is thoroughly researched, being packed with much detailed historical information.

The twenty-five metre long (and four metre high) wall is a screen for a continually moving scroll, drifting from right to left with no fixed centre, but like a sequence of comic frames (with no edges) where certain characters reappear in different juxtaposed scenes. Within the sea vistas, rolling downs and lush vegetation of Charvet’s coastal landscape (a utopian version of Tahiti), Reihana sets out her vignettes in spatially orchestrated sites of foreground, middleground and long distance.

Although the placements of these acted dramas are carefully structured - even predictable - the results are never boring. It is obviously a work that encourages many visits, due to the complexity and nuance of the varied historical content built into its narratives of transcultural encounter - and so the coming book, with over a dozen explanatory essays, will deservedly be extremely popular.

Even though the panoramic video is a cyclic loop, that fact ignores the sense of narrative direction and developing mood manipulation within the work. The various elements - seemingly at first disconnected - are still cohesive, enabling a tension to build up that culminates in Cook’s violent death and the presentation of a gift from the Hawaiians to his crew of Cook’s deboned thigh as an act of reconciliation and respect. Because simultaneity is a basic component of this work (like as in a Bruegel painting), there is no omnipresent spotlight that directs your focus. The viewer has to look at the various activities while they glide past, select and prioritise according to their interests, and then make further connections.

The sound design by James Pinker is also conspicuously clever, as the mix is constantly changing in its focus, not only as various personages come into view on the right and then disappear off the lefthand edge, but through the balance adjusting (while protagonists are in horizontal ‘transit’) between distant activities and near, significant conversations (or singing) and humdrum.

Included in the cast of historical personalities that appear are Cook (an astronomer himself), Joseph Banks the naturalist and botanist, Charles Green, another astronomer, Tupaia the Tahitian chief and translator, and William Hodges the painter. No doubt other personages will be talked about at length in the book.

The work’s title also is a clever pun. Not only does it refer to the Admiralty organised expedition to track Venus’s trajectory across the sun while furthering the Empire, and the introduction of horrible European diseases (and other contaminations) to the South Pacific, but it also refers to the movement of a group of dancing Tahitian women as they float across the screen, and the ‘infection’ now of the gallery viewer’s ‘touristic’ gaze, even if the women’s grouping is deliberately angled to face another audience unseen in the landscape. There is also a pun in the acrostically abbreviated version of the title (iPOVi), alluding to a ‘point of view’ taken by the independent viewer, and one of the artist as well that tries to flip the voyeurism of the original wallpaper around and undermine colonial objectification.

Easily the most engrossing of all Reihana’s projects to date, by virtue I think of the multiple options available for concentrated viewing (you can pick your own site/sight narrative trajectory) this work will inevitably be much discussed and - more importantly - much loved, worldwide. An extraordinary achievement.

Here's an interview with Lisa posted today at Circuit: http://circuit.org.nz/blog/circuit-cast-episode-23-an-interview-with-lisa-reihana

Here's an interview with Lisa posted today at Circuit: http://circuit.org.nz/blog/circuit-cast-episode-23-an-interview-with-lisa-reihana