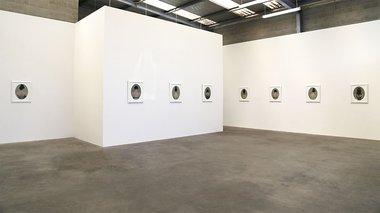 Viewed as a family tree, one might suggest that both of these suites of work are from the same branch - a curiosity about the negating of persona, a playfulness with the politics of identity. The same can be said for Straka's 'Burka Babes' - the female form obscured by a Muslim niqab, distinguished only by the eyes and perhaps strikingly tattooed arms. From these three bodies of work we might infer that the nude is merely another kind of homogenising uniform.

Portraiture from the back has an interesting position in art. Ingres’ seductively elongated odalisques are the obvious touchstone and keep cropping up as in Man Ray’s 1924 photographic homage Le Violon d’Ingres punning on Kiki de Montparnasse’s Stradivarius-esque curves. Certainly the ghost of Ingres haunts The Honeytrap, Heather Straka’s latest showing at Christchurch’s Jonathan Smart Gallery.

The show consists of female and male bust and three-quarter semi-nudes seen exclusively from the rear, posed against impersonal aircraft-grey grounds echoing Academic French neoclassical portraiture. The faces cannot be seen. The female subjects are distinguished from male (assuming there isn’t some en traveste genderf*ck going on, something quite possible with Straka) by the feminine puncta of their brassiere straps. The title underlines the intentional nature of their seductiveness - a ‘honey trap’ is slang for a sexually-attractive individual set up as bait for blackmail or an arrest. In this case, the hustler’s ‘mark’ is the viewer.

But by no means is Ingres necessarily the point of origin. In the back space hangs Straka’s Somebodies Eyes from earlier in the year; rear portraits all in the same Nazi uniform jacket rudely made to fit with bulldog clips and duct tape. In both cases we cannot see the face - individuality is implied by subtle differences in hair, posture, and means of making that freighted khaki jacket conform to different bodies, and thus make different bodies conform to it (the irreducible essence of the fascist agenda). Full disclosure: having written the text that accompanied Somebodies Eyes at the Trish Clark Gallery in Auckland, also present at this venue as a wall text, I shall recuse myself from further specific comment and focus on The Honeytrap.

Viewed as a family tree, one might suggest that both of these suites of work are from the same branch - a curiosity about the negating of persona (something I think underpins a lot of Straka’s work), a playfulness with the politics of identity. The same can be said for Straka’s Burka Babes - the female form obscured by a Muslim niqab, distinguished only by the eyes and perhaps strikingly tattooed arms. From these three bodies of work we might infer that the nude is merely another kind of homogenising uniform (but whether it is the academic nude or nudity in general is uncertain). It would be very unusual in contemporary art for a nude to stand alone, independent of a cultural or social agenda.

Putting internal-symbolic and external-social readings aside, the paintings work well as stand-alone nudes; sensual, slickly finished and technically exquisite in imitation of the nineteenth century Academic painting right down to apparently being worked up from a greenish base to achieve the flesh tones. Given such knowledge is almost entirely absent from art school syllabuses these days, we must assume that, like many younger artists returning to the figurative tradition, Straka has turned to the old How To Paint books and the University of YouTube. It’s fascinating to think that what was once passed down from master to apprentice, or in the Academy, is now kept alive for professional painters in media intended for amateurs.

The Academic allusion is clearly intentional - that is hammered home by the heavy oval frames of the paintings and Straka’s pains to achieve technical mastery of high finish and nearly invisible brushwork. That particular conceit has been in place within her process at least since the risqué, controversial Romantic Traffic paintings of 2005 and their emulation of the tropes and mannerisms of Charles Goldie’s and Gottfried Lindauer’s portraits of Māori. Straka’s desire to test herself against the precision of Academic naturalism and figuration goes all the way back to the trompe-l’œil urinals of 2000, and stimulated an interesting dialogue with photography in her work (notably with colonial photographer W.H.T. Partington in Romantic Traffic and the disposable mass-media image in The Asian in 2011). Painting, for Straka, is an exercise in testing to the limits of the discourse (what she can get away with) in all aspects of her practice.

In the broader context of the exhibition, my personal response is that the female nudes (or, at least, the nudes that read as female) are the most successful because of the occasional hint of long glove and prominent bra straps with a label poking out. It is these elements that create a fetishistic erotic frisson and drag them into a present-day contemporary context; necessarily intrusive prostheses that bring home the artifice of the artistic project in a way that is kissing cousin to Gustave Courbet’s negotiations between realism and aesthetic. The trouble with the male nudes is that, though beautiful, they exist unmoored in art history and thus automatically invite comparison with similar, technically superior, decidedly safe studies of passive pretty boys by minor nineteenth century French academicians, like Hyppolite Flandrin or one of his contemporaries. Unless the boys can find their own puncta or some flamboyance (à la Caravaggio or Girodet, perhaps) to subvert or elicit a reaction, they seem disappointingly redundant.